On September 13, 2005, I had been studying Christian Science for about eight months. During that time, I had been healed of many addictions (alcohol, cigarettes, marijuana), and my life was on the rise. Yet, on this particular day, it seemed as if my past was catching up with me.

I was due in court on Friday for a “driving under the influence” (DUI) arrest, which had occurred before my “resurrection” through Christian Science. I was to give new evidence for an appeal because my attorney believed the arrest had not been carried out properly and that maybe he could cut a deal for me.

Looking at it in the new light Christian Science was shedding on my life, I wasn’t fearful of the outcome, but was encompassed by fear that the appeal was not in accord with God’s will for me.

As I prayed, I realized that in God’s universe all things work according to His law. I could trust that God’s law was in control, and the real judge was God. Through my prayer I realized that everything in God’s universe is harmonious. All I needed to do was let His harmony reign and stop trying to solve the problem myself. This line of thought helped me feel more peaceful.

Feeling I needed spiritual support, I called my mother and asked her to pray for me. She explained that “reformation cancels the crime” (Mary Baker Eddy, Science and Health with Key to the Scriptures, p. 404). She made clear that God wouldn’t bring me into this new view of Truth, help me take these steps, and then punish me for making the spiritual journey.

That sounded great! But what did it mean? Was it because I was now living up to my “highest sense of right”? A very calm and loving “Yes” came to me as the answer. I knew that my reformation really was sincere, and I’d had a complete change of heart from my old way of thinking. But would the judge see it that way?

While praying during the week before the appeal, I listened many times to a recording of an article by Adam H. Dickey called, “God’s Law of Adjustment.” In this article he states many wonderful truths, such as, “… if we succeed in getting ourselves out of the way, we can then be satisfied to ‘stand still, and see the salvation of the Lord’ ” (The Christian Science Journal, January 1916, p. 563). Each time it came to me that I needed to do something through my own will, I chose to “stand still” and let God take control.

When the day of the hearing arrived, I prayed the “Daily Prayer”: “ ‘Thy kingdom come;’ let the reign of divine Truth, Life, and Love be established in me, and rule out of me all sin; and may Thy Word enrich the affections of all mankind, and govern them!” (Mary Baker Eddy, Manual of The Mother Church, p. 41). I was calm instead of feeling fearful and guilty as I had been in the past about these so-called “days of judgment.” It was awesome! I cheerfully thanked the Lord and proceeded to the courthouse.

When I got there, the arresting officer was out front with some other officers. Fear tried to sneak back in and say to me, “These are the officers who were at the arrest, and no matter what the truth is, they will persuade the judge in their favor.” I answered this thought with a smile toward them and sat down to read the Christian Science Bible Lesson.

My lawyer, the arresting officer, and the district attorney entered the courtroom, leaving me outside. Not much later, my lawyer came out and told me in a smug voice that the arresting officer was being very friendly and had even congratulated him on his new baby. I said that no matter what had happened in the past, I was sure this man was a nice guy. That is not something I would have said when all this began a few years ago. I knew my attorney was confused by my change of attitude.

Patiently, I explained the healing of all my addictions (alcohol, cigarettes, and pot), and of my newfound love for God through my study of Christian Science. His demeanor immediately became calm. He was no longer anxious or excited. We went into the courtroom and sat down.

When the judge called our case, he asked my lawyer and the district attorney to join him in his chambers. This left the arresting officer and me just a few seats apart. The next thing I knew he had slid over right next to me. He told me he was curious to see what had happened at my driver’s license hearing. I explained that the appeal had gone through and that I had received my license back with nothing showing on my record. He replied that he was happy to hear it. He said that if I had been more truthful the night of the arrest, we would not be here now. I responded that my recklessness, not his arrest, had brought us here. I also briefly told him about my reformation. Soon the judge, along with my lawyer and the district attorney, came back out.

Based on the evidence the judge had seen in his chambers, I was granted a dismissal. The officer, my lawyer, and I walked out together, chatting in a friendly way. Not only had reformation canceled the crime, but the peace we felt toward each other was remarkable.

Seeing how God’s law controls all, not just part of any given situation, put me in awe of the power of prayer. There really is only God, divine Principle, controlling all.

After a year of postponing the date and much prayer, and even though he knew the judge was on vacation, Summer told the lawyer to go ahead with the current date set, instead of changing it. After Summer let go of the desire to manipulate the situation, unexpectedly the same judge returned early from vacation and ruled on his case.

During this episode, I reviewed all that I had accepted as a negative influence on my son throughout his entire life—friends, family, heredity, teachers, movies, and so forth. I could see God’s controlling love orchestrating everyone involved. And knowing my son’s innate goodness, I was totally free from any fear. 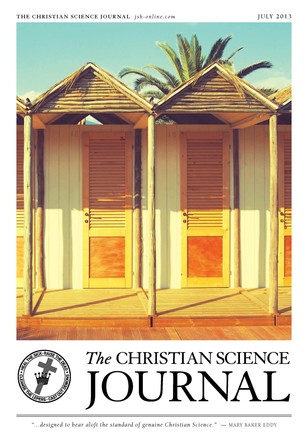 Understand, be firm, and yield!

Outside the box of limited thinking

The evolution of the Quarterly

A case of divine law

A return to Christian Science

Drawn to the Christ

New readers of The Mother Church

From the Christian Science Board of Directors | July 2013