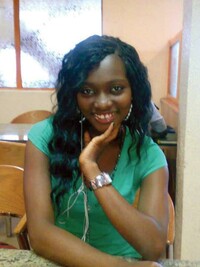 To be refused a student visa once can be disappointing, twice can be alarming, but the third time can definitely be heartbreaking. That was how I felt when I went in for my visa interviews to travel from Nigeria to the United States to attend college.

After my first visa interview was conducted, I walked out of the US Embassy full of disbelief; I had not been granted a visa. The only thought that kept coming to me on the drive home was, “Father, I am not sure of other things, but this I am very positive about. You did not bring me this far to leave me stranded.”

When I got back home, another thought came to me: “Have you given thanks?” I said to myself, “Why on earth should I give thanks? I have just been refused a visa!” I did not want to acknowledge any positive thing at that particular time, so I avoided giving gratitude.

After a few hours, I felt a strong urge to study my Christian Science Bible Lesson. As I was reading, I realized I needed to love the visa interviewer and the people around me. Immediately, I had this revelation, and I said a silent prayer, “God, I thank You,” and I felt peace within myself.

When I went to church the next Sunday, my friends all wanted to know about the outcome of my interview. When I told them I had not been given the visa, they couldn’t believe it. There were two other students who were applying for admission to this same college. I had been the first to interview, so my friends wanted to know what to expect. Without any jealousy in my heart, I gave them every detail they wanted to know. A few weeks later, they both went for their interviews and they were successful. I was happy for both of them, but I was anxious about my situation.

A week after my first visa interview, I was denied a visa again. It was then I was hit with the realization that my two friends were going to college and I was being left behind. I felt terrible.

When I checked my e-mail, I was met with one from an international student coordinator at this college. At the end of her e-mail she wrote, “God has a beautiful plan for you.” I immediately let this idea sink into my consciousness, and I felt God’s love enveloping me. I wrote the phrase “God has a beautiful plan” on a piece of paper and placed it by my bedside. This phrase helped me gain strength.

A few months later, I was given another interview date. As I prepared for the interview, I thought about how no opportunity is lost in God’s kingdom. After I was interviewed, I was denied a visa for the third time; however, I thanked the interviewer, knowing that God had a beautiful plan in store for me even if I didn’t know what it was.

Throughout this experience, I marveled at God’s care for me. He cared for me through my parents, who have always been there to help, through the church members who were very supportive, and He also cared for me financially every time I went to a visa interview. After all this, I was still holding on to the simple fact that my Father-Mother God had a beautiful plan for me.

All this love that was being shown to me made me see that God is definitely with you wherever you are.

Shortly after the interview, my family decided to relocate to Ghana from Nigeria. I wondered if I was going to blend in, or if the language was going to pose a barrier for me. When we arrived in Ghana, we were warmly welcomed by our family. (My dad is Ghanaian by nationality, and so his family was there to welcome us.) Immediately I was settled, and I took out my Bible Lesson. When I finished reading the Lesson, a feeling of love totally engulfed me. The fear that I was feeling earlier was gone, and I was totally trusting in God. All this love that was being shown to me made me see that God is definitely with you wherever you are.

I began attending church services, and I continued loving my stay in Ghana. Then, the time came for all the universities in Ghana to start selling their application forms to students. I was interested in a particular university, so I bought a form and submitted it. I was so sure that I was going to be admitted because I had an uncle who worked for the school. But I later realized that I was not starting with an “I trust God” mind-set; instead, I was starting with, “I trust my uncle will help me.” I prayed about this and humbly asked God to let “Thy will be done” in my life.

While my application was being processed, I heard from the college in the US. They wanted to know if I was willing to apply for another visa interview. I spoke with my parents, and they asked me to listen to God’s voice before I made any decision. As I prayed, the thought came strongly to me that I did not want to go for another interview, and I told the college my decision.

This question had me thinking the whole day, and then it hit me: I heard God’s voice during my prayers, but I did not fully listen to it. Now, I decided I was going to follow Him and listen to His voice. I reported back to my mum that I was willing to trust God.

When I went to church the next Sunday, I received information about another university. Later that day, I went on the Internet to read about the school. I was surprised about what the school built itself on, which was integrity, leadership, and good morals. This was to me a very beautiful place in which to be trained; the one obstacle was that the school was very expensive. Although I was worried that I wouldn’t obtain a scholarship to attend college, I knew there was a spiritual solution.

I remember dealing with the fear of not being able to afford school by reflecting on breaking the barrier of limitation. I thought about putting a coin flat on a table. If you put your eyes level with the surface of the table and look at the coin from that standpoint, you see only a short straight line on the flat surface and that is all you can see of the coin. However, if you lift your eyes a little above, you see a completely new dimension. If you continue to lift your eyes, the straight line disappears—you see a complete circle.

Soon, I was given a scholarship and granted admission into this school. I have learned that when you listen and understand God’s voice in any situation, you’ll find spiritual solutions that meet your every need. I am now in my third year of college, and God is still doing wonders in my life. I can now see that He has a beautiful plan for each and every one of His children. 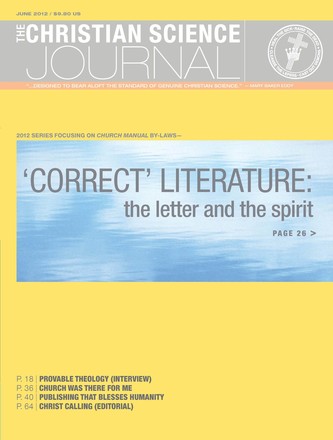 Could somebody 'in rapport with Mind' have known 9/11 was impending?

If a man’s body is completely destroyed in a fire, is he still ashes immediately after death?

Could you please explain two statements in Science and Health that seem contradictory?

Church: are we really there?

Mary Baker Eddy: In the words of those who knew her

How can we come to better understand the highest way of praying and healing?

An online ‘cup of cold water’*

'Correct' Literature: the letter and the spirit

A heart radiant with love

Addiction to smoking: no part of God's allness

Church was there for me