I have always loved studying different languages and cultures. So, when I was given the chance to learn Spanish and Indonesian during my last two years of high school, I eagerly signed up. I had moved from South Africa to Australia the year before, which meant I could no longer learn Afrikaans, so I was looking forward to starting both of these new languages.

Later, I decided to take a gap-year before university to put my new language skills into practice, and to take time out to think about my future. The last year of high school flew by, and I suddenly realized I was leaving all my university-bound friends for a year of travel to exotic locations. I bounced between excitement and jangling nerves until at last I was on my way to West Kalimantan, a remote island in Indonesia. I decided to go there after I had met an Indonesian diplomat who raved about his hometown, and who kindly offered to set up accommodations for me with the mayor and his wife. When I left, all I knew was that I would be staying in a beautiful coastal town, and that I would be teaching English in the local schools.

The first leg of my trip was not what I expected. I took a long and terrifying bus trip from Kucing, Malaysia, across the border to Indonesia. It was then that I realized just how rare it was for a buleh, or a person with pale skin and blue eyes, to travel to the region. People stared, called out, and followed me, asking questions in broken English. When I got off the bus to go through Customs at the Indonesian border, I pulled my hoodie right over my face and ignored shouted offers for coffee and a cigarette.

My first two weeks in Singkawang, West Kalimantan, were traumatic. As it turned out, nothing had been organized for me at the local schools. My contact at the embassy had assured me before I left that his friend would arrange for me to teach English, but when I got there, they all expected me to organize it myself. I felt overwhelmed and lonely, as I had only a basic grasp of the language, and my life was in the hands of people who acted in a way completely strange to me. My host family was very busy with work and school, and seemed oblivious to my desire to go out and see the sights. They were worried for my safety, because of the difference in my appearance and a few kidnapping incidents in the area, and so I was dependent on their family driver, who was already busy driving everyone else around.

I eventually made contact with a nearby school, but instead of teaching English, I attended the school as a student. They told me that the students were writing exams, and were revising rather than learning anything new, so there was no need for me to teach. Most of them had never seen a buleh before, so I was pulled up in front of classes for endless photo shoots with teachers and students. Wherever I went, I felt lost and lonely, my white skin putting me in the spotlight, and my attempts to reach out for friendship met with confusion and shyness. Two long, empty months seemed to stretch out in front of me. I ached to see my friends and family, and to be accepted as myself, not just as a rare, exotic face from Australia.

It took two weeks, but finally I turned to prayer. And then I felt I had something familiar to lean on. I loved the idea of setting aside time for God every day at sunset, which most people around me did. The local mosque sat just across the road, and I decided to mentally join in the melodious call to evening prayer. My room faced a vividly green rice paddy, and I would sit on the balcony to read and pray, looking down at the men praying in the mosque, and watching sparrows flitting in the rice paddies, waiting for the enormous, jungled mountains to fade into darkness.

Finally, I felt the peace I was searching for. I glimpsed that God, Truth, is relevant in every nation, culture, and situation. I prayed to recognize those around me as my brothers and sisters, our differences dissolved by the understanding that we all shared the same Father-Mother God. As I continued to pray, my perspective gradually changed, and my loneliness and frustration melted into love and fascination.

One day I was reading the weekly Christian Science Bible Lesson, and two passages jumped out at me. The first was from the Bible: “Though I speak with the tongues of men and of angels, and have not charity, I am become as sounding brass, or a tinkling cymbal” (I Cor. 13:1). This made me realize that although I was there to improve my Indonesian, my real purpose was to establish a harmonious relationship with those around me, to communicate with the universal language of Love.

The second passage was from Science and Health: “One infinite God, good, unifies men and nations; constitutes the brotherhood of man; ends wars; fulfils the Scripture, ‘Love thy neighbor as thyself;’ annihilates pagan and Christian idolatry, . . . and leaves nothing that can sin, suffer, be punished or destroyed” (p. 340). I needed to change my perspective from feeling different and divided, to feeling harmony and divine bonds of love. Instead of being “Indonesians” and “Australians,” dark-skinned and fair, we were all the children of God.

Before then, I had not recognized the laws of God in action, and instead believed I was living in a place with different mind-sets and cultural misunderstandings. I was looking at the world around me from a limited, human perspective, thinking that the people looked and acted differently from what was “normal.”

As I prayed to see them as my brothers and sisters, as part of the same spiritual creation as me, I began to affirm that I could not be tricked by thoughts of difference and incompatibility, which could have later developed into feelings of prejudice and hatred. I held to the idea that we are all expressions of Love, no matter where we are in the world. Once I had complete faith that the laws of God were in operation, I could recognize them all around me. I committed not to label people physically as “white” or “Indonesian,” but rather to see all of us as “children of God,” collectively and spiritually.

From that moment on, everything fell into place, and I opened my heart and mind to my new home. I stopped worrying about the stares, catcalls, and photos, and focused on uplifting my own thought. My initially distant Indonesian host family became like a real family, and I made friends and absorbed every aspect of the fascinating place in which I was living. The students at the school overcame their shyness and, although still eager to get photos with the Western buleh, were equally eager to share with me their lives, cultures, and religions. I attended local high schools six days a week, learned traditional dancing, and went to local and national events with the mayor’s wife. I realized that the locals may have been scared to speak English with me, and as my Indonesian improved, I was able to chat and laugh with them, learning about their lives and cultures in a way that no book could possibly teach.

I left the island of Kalimantan with tears in my eyes and promises to return. I had become fluent in the language of Love, and had gained more out of two months than I ever could have imagined.

Jen Plaistowe lives in Canberra, Australia, and is currently studying Asian studies and arts at university. She hopes to go back for a “Year in Asia” program and learn more about Love and language. 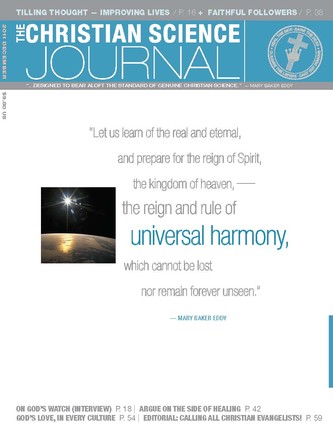 Peace on Earth? It's coming!

Are all material objects simply ideas, or is matter altogether nonexistent?

What did Jesus see as God’s own likeness?

From the Christian Science Board of Directors

By the Christian Science Board of Directors | December 2011

Our turn to go to NCC headquarters

Prayer for a congregation

How do we ‘prepare’ for universal harmony?

What membership in The Mother Church means to you