In the United States, we begin November with a national election for president, and conclude with a national holiday to express gratitude—Thanksgiving Day. Perhaps it would be better to begin with gratitude and then vote. Gratitude is such an inspiring, transforming quality. It recognizes goodness and expresses appreciation for it. Gratitude opens one's eyes to discern right motives and actions. A grateful heart is less inclined to criticize and condemn. It accentuates the positive, without ignoring the negative, and supports every effort of noble behavior. Gratitude includes an unselfishness that is willing to see goodness in others, and a humility that doesn't feel threatened by acknowledging that goodness. Gratitude builds up. It never tears down.

So it would be helpful for gratitude to precede our participation in a democratic election. Don't we want the people who are elected to do a good job? To act wisely and morally? By taking a few moments and opening our hearts to recognize good in each candidate, we will be contributing to an election that unites rather than divides, that builds up rather than tears down.

How can we see good in a candidate who opposes our own views?

How can we see good in a candidate who opposes our own views in what we feel is a harmful way? By remembering that God sees good in Her/His creation even where humankind sees the opposite. Goodness and holiness are inherent in creation, which God made to glorify His own nature. The Bible says that "the earth is full of the goodness of the Lord. By the word of the Lord were the heavens made; and all the host of them by the breath of his mouth."  Ps. 33: 5, 6. God, the source of all true law and justice, doesn't ignore mistakes. He simply doesn't make them. The Supreme Being made creation good. So He knows that His children embody the wisdom, purity, and love with which they were created.

So can't we expect to see those qualities, even at election time? What if our prayer in support of elections began with an acknowledgment that all candidates are under the government of God and responsive to His wisdom, inspiration, and direction? What if we prayed that each one rise to his or her inherent spiritual nature and reflect the power of God to love and heal? There isn't a candidate running that isn't capable of expressing his or her true nature more fully. With the support of gratitude and appreciation, every candidate will be of increased service. As an American educator, Nicholas Murray Butler (1862-1947), expressed it, "True democracy cries, All men up to the height of their fullest capacity for service and achievement."  Quoted in Mobile (Ala.) Register, July 11, 2000.

The Bible refers to an election of another sort. This election is not a competition for votes. It is God electing us to do His will. In another sense, it is our choosing, or electing, to do His will — choosing God and acknowledging the love and truth Christ Jesus lived as the way to present and eternal salvation. This is an election that everyone wins. There are no losers. It is seeking God and spiritual truth and serving each other with gratitude. It is rising with Christ to discover the new man and woman made in the image of God, who is Spirit. It is an ongoing fulfillment rather than a one-day event. The Scriptures say, "As God's own chosen, then, as consecrated and beloved, be clothed with compassion, kindliness, humility, gentleness, and good temper — forbear and forgive each other in any case of complaint; as Christ forgave you, so must you forgive. And above all you must be loving, for love is the link of the perfect life. Also, let the peace of Christ be supreme within your hearts—that is why you have been called as members of the one Body. And you must be thankful."  Col. 3:12-15, Moffatt translation.

Our individual election relates to our expression of God's grace, to being thankful, loving, forgiving. A gracious, grateful heart will surely bless political elections, whatever the country, whatever the outcome. 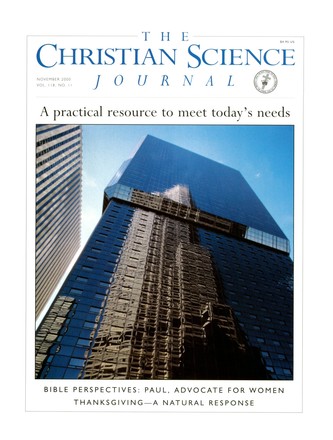 The weekly Bible Lesson is important to me!

Cared for in difficult times

When all is said and done

Governed by God's law, not machines

By Kim Shippey with contributions from Rebecca Silver Weber | November 2000

Stand on what you know

with contributions from James Neal, M B G Eddy, A. Bronson Alcott | November 2000

Please tell how Science and Health has changed your life.

A new spiritual oasis on the World Wide Web

By The Writings of Mary Baker Eddy | November 2000

The Internet: giving global access to Science and Health with Key to the Scriptures