When I was growing up in the San Francisco area, my family often spent weekends and vacations at the beach. Now I live on the opposite coast, but my love for the beauty of the beach has moved across the country with me. One of my favorite activities is to take a long walk along the sand at sunrise or sunset. As I go, I like to find nature's jewels—shells, sea glass, and the small sea-worn pebbles that I call smoothies.

A couple of summers ago, while my daughter and a friend were visiting our beach cottage, we'd planned to take one of these early morning treks. Although I liked the idea, I felt a gnawing reluctance about going. I'd been at the seashore for almost a month, but I hadn't been able to take my usual walks. I felt there was something physically wrong with me—something inside me that didn't belong. I suspected a tumor. My pants weren't buttoning, and the symptoms were frightening. I didn't have a medical diagnosis, because I was treating myself by the spiritual means I'd always used in the past. I was endeavoring to quietly pray, and also to be still, to avoid aggravating the condition.

But on this morning I got past the fear and went anyway, walking along praying to God for support and for the ability to be more aware of His presence than of this condition.

As I walked, I picked up a smoothie and, rubbing it in my hand, I began to think about a Bible story that mentions smooth stones. I recalled that when the young shepherd David was preparing to meet Goliath—a fierce, mighty, and large man—he opted to use smooth stones as weapons, instead of the unfamiliar war gear that had been offered him. See I Sam. 17:1-50 .

As I've applied that story to my own life for the spiritual lessons it can teach me, I've always thought of Goliath as representing a looming threat. And I've seen David's stones as familiar ideas that would defend against such an enemy. During my walk on the beach, I couldn't remember how many stones David took with him to fight Goliath. But I collected five beauties—all different shapes and colors. I had no idea what David's stones were meant to represent. But I earnestly listened in prayer to hear what dependable spiritual facts might come to my defense and comfort me in my battle for health and peace. They came like this:

4. God showers me with blessings.

5. These are permanent facts—true now and always.

It seemed pretty basic. But I could see that the simplicity of David's experience had power. He went to fight Goliath simply. Trustingly. Without adornment. With a small bag of stones. (How tickled I was when I looked up the account in the Bible and discovered that there were five stones in David's bag, just like mine! This in itself was encouraging to me. It felt like God was helping by turning me to this example of defeating a giant.)

I had no idea what David's stones were meant to represent. But I earnestly prayed to hear what dependable spiritual facts might come to my defense in my battle for health and peace.

I wasn't healed that day, but I had something inspiring to work with. The ideas were meaningful because I felt that God had sent them. I lined up the stones along my window ledge and every time I saw them, I remembered that God made His creation, loves His creation, and maintains His creation. God showers Her own with blessings, and these are reliable, permanent spiritual facts. Like the stones on the sill, I felt that I was now lining up with a dependable God, and that these spiritual truths were solid defenders.

Late October. I was still at the beach. Still praying.

One day, feeling restless, I decided to take a walk. It was blustery autumn now and had been pouring rain for days. So when I saw a break in the weather, I decided to get into my foul weather gear and go. I walked too far though, and when the wild weather blew in again, I was nowhere close to home. I could barely stand against the wind.

It was a perfect metaphor for my feelings. I felt worn out from fighting this condition. I looked around the deserted landscape for rescue, but I knew my help was not a passing vehicle. I needed inspiration, a message from God to help face down this Goliath. I took a few steps. My umbrella was useless—it only made walking harder. Drenched in rainy tears, I stopped and asked myself, What are you so afraid of? What do you think is going to happen? Is God going to desert you? The reply came: The problem is that, although you've faced down many things in your life, you have never felt such despair. You have never felt this kind of hopelessness. That is what you're up against.

I agreed for a moment. It seemed to make sense. OK, I thought, so that's it. I am afraid because never before have I faced such raw fear or the threat of death. But then, something amazing happened. I began to go back over some of the spiritual healings I'd had in the past, and I realized that fear had been a factor before—even the possibility of death. And each time, those threats had been faced down through persistent prayer.

So I had dealt with these issues before. The temptation to believe that I hadn't was a lie. It wasn't a message from God. It was just the opposite—destructive, discouraging thinking. Seeing that I'd almost been duped helped me realize that the entire presentation of disease is a deception. A trick. It's totally unlike God. So it can't be real. My work now was to see through this trick, to realize that although a condition like sickness—or any evil—seems to be real, it is only illusive, mistaken thinking.

Still standing in the driving rain, my next thoughts were: So now what? Where do you go from here? How do you get home? These questions applied both to the rainstorm and the mental swirl I was in. And then, the message I'd been praying for came. It was clear and strong: You will work this out just as you have worked out other situations. And it is the same way you will get yourself home right now. You will put one foot in front of the other and go forward. One thought would follow the next, and healing thoughts would bring me out of gloom, darkness, and disease.

With each step I felt more hope and assurance. I didn't look at the little cottage way off in the distance. I looked at the path in front of me and at my green boots moving one step at a time. It was no use feeling anxious about the distance I had to travel or the force of the wind. I would get there through patiently advancing, one step at a time. The storm was still raging, but I felt calm assurance. God was with me, and would guide me to healing.

I got home. I ran a warm bath and glanced at my windowsill to see those five smooth stones. I reviewed their messages: God made me. God loves me. God maintains what She made. God showers me with blessings. These are permanent spiritual facts. I let them "sink down into my ears," Luke 9:44 . as Jesus once asked his disciples to let his teachings do.

These ideas began to overshadow my bodily complaints. I began to turn to God constantly, but calmly. I knew I was gaining ground when I reached for Him out of love, rather than fear. I came to see the symptoms as challenges to the five spiritual facts I had been savoring. And I knew it was legitimate to object to them because God gives Her creation only good. This divine good is permanent.

I knew I was gaining ground when I reached for God out of love, rather than fear.

The skies cleared over Nantucket, and I soon went home to New York. I don't know exactly when my clothes began to fit again, and when the odd sensation of something inside me disappeared, but I felt normal not long afterward.

Weeks later, I was reading Science and Health and came across this sentence: "Speak the truth to every form of error. Tumors, ulcers, tubercles, inflammation, pain, deformed joints, are waking dream-shadows, dark images of mortal thought, which flee before the light of Truth."  Science and Health, p. 418. I realized that I'd avoided delving into this sentence for many years. Now I felt I understood it for the first time. And it was friendly, not frightening. I'd just seen the power of speaking the truth. I'd learned that I could stand up to this list of conditions because Truth, God, is all-powerful. These descriptions of evil have no power, because God did not make them. Storms clear. And with the light, comes victory.

Rebecca Odegaard is a practitioner and teacher of Christian Science. She lives in Boston, Massachusetts. 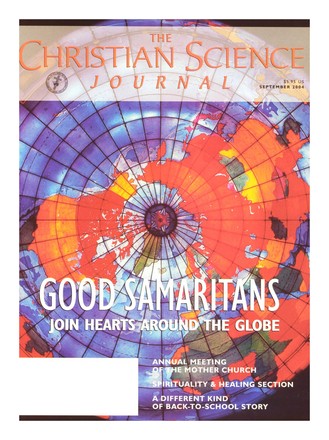 How does your neighborhood grow?

Thousands of good Samaritans join hearts around the globe

From the Clerk of The Mother Church

Annual Meeting of The Mother Church

God healed me, and now I'm helping others

The pain was intense, but I could still pray

A different kind of back-to-school story

It didn't turn out the way we expected

New view of the homeless

By Karlin Krishnaswami as told to Jenny Sawyer | September 2004

Extend your love of Church—invite a friend to apply

By The Christian Science Board of Directors | September 2004