As a child, I saw my brother healed of bowlegs by Christian Science. The legs were so badly bowed that he could not stand on them. Orthopedic methods were given a full trial without effect. Then absent treatment in Christian Science was asked for, and my mother started to read "Science and Health with Key to the Scriptures" by Mary Baker Eddy. Within three weeks the legs were straight and strong.

I have experienced quick healings in Christian Science, but I have also learned that, even if a healing does not come at once, it will still certainly come if the truth is persistently and correctly applied. About twenty years ago I began to lose the use of my legs. I sought help in Christian Science, but the condition grew worse until I was no longer able to attend to my professional work.

At the time I held an established post in the British Home Civil Service, and when my regulation sick leave was exhausted I was required to have a full medical examination in order that the authorities might decide on their next step. I agreed to the examination, but explained that I was relying on Christian Science for healing and did not desire any material treatment. An ambulance took me to a service hospital, where I spent a week under thorough medical examination. The surgeon in charge then told me that I was suffering from some form of paralysis for which there was little likelihood of cure. He also told my wife that I could not be cared for at home, as among other things bedsores would soon develop. I did not see his written report to my department, but the outcome was my being invalided from the service.

I returned home and was effectively cared for there without any special nursing attention. When bedsores began to develop, they were quickly healed by Christian Science. However, for almost ten years I was unable to stand or walk; I could only sit up for a short time each day, not always that. The difficulty in moving spread, and other complications developed. Several times it appeared that I was about to pass on. I could eat little and slept poorly. Our home, an upper flat in central London, was for four of these years under air attack. Financial supply had to be found, too.

But all the time spiritual growth was going on through Christian Science. Sometimes I studied alone. Sometimes I had treatment from a steadfast practitioner, who brought me great inspiration. Always I had the unfailing support of my wife. When too weak to turn the pages of Science and Health I started to learn it by heart so as to grasp every detail. I learned more than half the book by heart. Its teachings were food and rest to me.

As I studied and received treatment, great spiritual joy filled me—joy that God governed and nothing could interfere with His purpose of present perfection and satisfaction for all. And with the joy came an ever keener sense of spiritual innocence, a perception that man, being the individual expression of divine Mind, could never have entertained at any moment any incorrect thinking which could have caused or could justify suffering. The recognition of good's allness and evil's nothingness followed and irresistibly took charge of the physical condition. In the tenth year improvement began. I started to walk again, and sleep and appetite returned to normal. There were setbacks, and certain readjustments were not easy, but step by step the healing was finally established.

Along with the physical healing, successive new opportunities for interesting work opened up. Sometimes these made demands which seemed beyond my strength at the moment; but as I went forward in God's strength, the demands were met. At last I found myself leading a fully active life again, occupied more satisfactorily than ever before. All the good of those years has remained with me; all the loss and evil are as though they had never been.

I am grateful to Mrs. Eddy for discovering the spiritually scientific law by which Christ Jesus healed and for giving it to mankind in Science and Health. I am also grateful to her for the spiritual education I received through various activities of the Christian Science movement—the Sunday School, a Christian Science Organization at college, membership in The Mother Church and a branch church, class instruction, and the help of practitioners. This spiritual education prepared me to meet the experience here related and enabled me to reap its full blessings. I am grateful for the love and support of fellow Christian Scientists during this time. Most of all I am grateful to God, the divine Principle, who is also divine Love.—Peter J. Henniker-Heaton, Cambridge, Massachusetts. 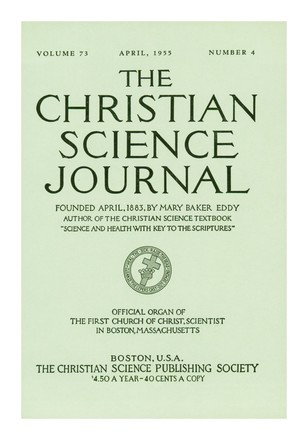 THE SYMPHONY OF SOUL

LEARNING THE LESSONS OF PROGRESS

THE INVISIBLE POWER AND PRESENCE

"The stature of the fulness of Christ"

FEAR NOT A CHANGE

Easter in the Heart

THE GLORIOUS INHERITANCE OF SPIRITUALITY

The Season of Soul

THE CHEMISTRY OF TRUTH

MAN IS SPIRITUAL AND PERFECT

"THE ONE DIVINE METHOD"