True manhood and womanhood seem to be under attack in our world in both blatant and subtle ways. Men are sometimes depicted as buffoons or as emotionless and ruthless, while women are portrayed as objects of sensuality—emotional and vulnerable. The world tells us that mortal personalities define our identities and that, as a result, we are subject to limits and various kinds of oppression. But this perception of men and women is wrong. Christ Jesus taught us about our true identity as God’s children. He taught that we are spiritual and defined by our only source—God. He exemplified true manhood and set the stage for the world, centuries later, to understand spiritually and scientifically both true manhood and true womanhood through the teachings of Mary Baker Eddy, the Discoverer and Founder of Christian Science.

Womanhood and manhood, while different, are equally essential and stem from the same spiritual source. In the first chapter of Genesis we read, “God created man in his own image, in the image of God created he him; male and female created he them” (verse 27). If God created both men and women in His image, then God must be the source of both masculine and feminine qualities. All of God’s children are made to express a balance of dominion, strength, kindness, and love.

The understanding of God as Father is clearly seen throughout Scripture. But God’s motherhood is also revealed. One of the most powerful descriptions of God is found in the book of First John: “God is love” (4:16). Mrs. Eddy expands on this concept in Science and Health with Key to the Scriptures, “In divine Science, we have not as much authority for considering God masculine, as we have for considering Him feminine, for Love imparts the clearest idea of Deity” (p. 517).

Manhood and womanhood in the purest sense are not at odds with each other. On the contrary, they complement and support one another. Mrs. Eddy writes: “The masculine mind reaches a higher tone through certain elements of the feminine, while the feminine mind gains courage and strength through masculine qualities. These different elements conjoin naturally with each other, and their true harmony is in spiritual oneness” (Science and Health, p. 57).

Since womanhood and manhood are so closely linked as expressions of the same Father-Mother God, an attack on one is an attack on the other. The carnal mind, or mortal thought, which the Apostle Paul said is “enmity against God” (Romans 8:7), attempts to invert and overthrow spiritual truth. Mortal mind tries to separate and materialize manhood and womanhood. It would make one subservient to the other.

I have had multiple opportunities to witness the healing and freedom that come from an understanding of true womanhood and manhood. As a female Christian Science Army Chaplain, my legitimacy in ministry has often been challenged because of my gender. Upon arrival at a military base in Kuwait at the start of a yearlong deployment, I was informed that there were some fellow Protestant chaplains who had voiced that they could not work with me because I am a woman. They felt strongly that only men can be Christian ministers. The implication of this was that I would not be able to work in chapel services, which was a requirement of my job.

At first this seemed like a personal attack. I was tempted to be frustrated, offended, and resentful. But I knew that if I gave in to these temptations, I would be giving in to the carnal mind’s view of identity as mortal and vulnerable. Instead, I needed to see more clearly that true identity is spiritual and inviolate.

Mrs. Eddy’s expression of true womanhood became an important model for me. Her grace, poise, and prayerful response to attacks against her role as a religious leader, businesswoman, and public figure were an inspiration in my work. She so clearly understood her spiritual identity that attacks against her were identified, impersonalized, and rebuked. I also took the opportunity to study more deeply Jesus’ view of women. He proved that access to God is not based on status, background, or gender, but on an individual’s spiritual receptivity to our Father-Mother God.

I prayed to be receptive to right, spiritual ideas in order to bring healing and reconciliation to this situation. I worked to drop any sense of resentment toward my fellow chaplains and to recognize their ability to follow God’s directing. I had to pray daily to ensure that I was not being influenced by mortal concepts of woman as emotional, reactive, or prone to gossip.

I found that there were some men who wanted to take action to “set things right” on my behalf. I appreciated their desire to help, but I recognized this approach as another subtle, if unintentional, barb against womanhood. Behind this protective instinct was the claim that men are more effective in addressing problems than women. I knew that backing away from the problem and letting others solve it wouldn’t be in line with my understanding of womanhood. All of God’s ideas, His sons and daughters, express His qualities equally. All of us have the ability to prove this, and to face and overcome error of any kind. I knew I needed to express grace, compassion, and forgiveness while having the moral courage to address the situation directly.

After a month of persistent prayer, I was able to set up meetings with the individuals who held concerns about my work as a chaplain. I felt that we had respectful conversations that corrected certain misconceptions about my role as a female chaplain. I didn’t meet with them in an attempt to change their opinions, but rather with a desire to recognize their spiritual manhood and express my spiritual womanhood. While they didn’t verbalize a change in their view at the time, I felt thought was being lifted to a higher understanding of God and His expression. I ended up working in a different chapel service than the one they led and was given a number of leadership opportunities in that chapel.

After three months of prayer and assisting with music and set-up for the worship services, I was invited to preach. During my first sermon, I noticed that one of the individuals involved in this issue was in the audience. I felt nothing but love for him. He didn’t say anything to me after the service, and I never saw him again because he returned to the United States a few weeks later. However, I was told that another chaplain in the audience that day, one who firmly believed women could not be preachers, left that service with a changed view. I knew divine Love was in control, protecting the work God had for me and uplifting thought so that true manhood and womanhood could be seen and experienced by all.

In recognizing the true identity of all men and women as the expression of our Father-Mother God, the carnal mind’s hatred of God’s children loses all power. Divine Love protects us from seeing, believing, or experiencing all forms of subjugation when our thought is filled with the Christ-idea. When we recognize our true identity as established and protected by God, true manhood and womanhood will appear, and the carnal mind’s attacks will be rendered harmless and be destroyed. 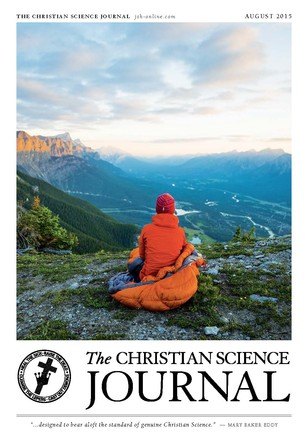 Three important concepts in healing: cause, substance, and law

In awe before Him

What Christ Jesus left to us

The shape of today

A happy and pain-free traveler

On upward wing to healing

Healed of persistent cough and discomfort

Clothed and safe in ‘the Christly garment’

How can I do a better job at being obedient to what Jesus taught?

Taking our thought into the ‘upper room’

The deep importance of this holy work

Learning about the power of divine Mind