If you're familiar with the Biblical account in Mark 6 of how Christ Jesus fed more than five thousand people with five loaves and two fishes, you'll probably also remember that not only were the people filled, there were even leftovers. Twelve full baskets, according to one account, which they carefully collected.

Have you, like me, ever wondered (because it's not mentioned in the Bible) how many others were fed by the leftovers? But even more important, how many others must have been fed by the abundance of spiritual food Jesus had just given them! He had been feeding their hearts and minds with spiritual ideas. We're told he "saw much people, and was moved with compassion toward them, because they were as sheep not having a shepherd: and he began to teach them many things." Mark 6:34.

Not long ago I was pondering the possibility that generations may very well have been fed through the truths learned and shared by that enlightened throng who had walked so far. Those who hungered for what Jesus had to teach returned home filled, spiritually as well as physically. No doubt at least some of them conveyed what they understood of the Master's teaching to others who weren't there.

While I was thinking about all this, in my mail came two charity pleas for holiday food baskets for the poor. On this same day I'd just read in the book of Nehemiah, "Send portions unto them for whom nothing is prepared." See Neh. 8:8-12. Nehemiah doesn't say portions of what. Food, we assume, since the statement is prefaced by "Go your way, eat the fat, and drink the sweet, and send portions ...." But we're also told that the people had just been listening attentively to the reading of the book of the law of God, and "all the people went their way to eat, and to drink, and to send portions, and to make great mirth, because they had understood the words that were declared unto them."

A point is made that it was their understanding of the word of God that impelled their rejoicing and sending portions. Is it too much to assume that these portions included sharing with those in need their spiritual understanding of God's omnipotence as well as food for the table?

The Manual of The Mother Church by the Discoverer and Founder of Christian Science, Mary Baker Eddy, counsels: "It shall be the duty of every member of this Church to defend himself daily against aggressive mental suggestion, and not be made to forget nor to neglect his duty to God, to his Leader, and to mankind." Man., Art. VIII, Sect. 6. Surely this duty to mankind includes loving our neighbor as ourselves and doesn't stop with giving dollars for food baskets. Shouldn't it also include enfolding our fellowman in our recognition of God's allness and goodness? After all, isn't the truth we're claiming for ourselves and striving to prove in our own lives just as true for all mankind?

Although I felt I had already been doing that, I was grateful for the plea for charity because it reminded me to do even more in that direction. And the Bible's account of sending portions gave me the impetus to be more diligent in specifically embracing my own community and world with my daily bread—the Bible Lesson given in the Christian Science Quarterly. In applying its promises and spiritual facts to local and world problems, I found astounding examples of nourishing truths in the lesson that were appropriate right in my own backyard, so to speak.

For instance, that day's newspaper bore the headline "Community of two minds on its shelter for homeless." The lesson included these statements by Mrs. Eddy in Science and Health with Key to the Scriptures: "It should be thoroughly understood that all men have one Mind, one God and Father, one Life, Truth, and Love. Mankind will become perfect in proportion as this fact becomes apparent, war will cease and the true brotherhood of man will be established." Science and Health, p. 467.

Before going further, let me assure you that this prayerful enfolding of our fellowman is no mere intellectual exercise of matching citation to incident. That would be nothing more than the letter of truth. The spirit of the law is also needed if we are to heal! But when our overflowing love for our neighbor is impelled by our genuine love of God, we share in tangible ways our Christly conviction that no problem is so deeply entrenched or entangled that it cannot be solved by the might of Mind, God. No hurt is so deep that it cannot be healed by Love's tender ministrations. Nor is any heart so hardened that it cannot be softened by universal and impartial Love. Realization of this spiritual truth is the prayer that brings to our thought the precise spiritual truths needed to benefit all whom our thought enfolds.

The newspaper article accompanying that "two minds" headline described community concerns on the one hand and community obligations on the other. It said both were justified and indicated that the situation seemed to be a no-win proposition. I began my prayer by turning away from all the human opinions, appraisals, and outlining that clamored for my attention. I trusted God to give me the assurance of His ever-presence and all-power that I needed in order to embrace my neighbors with Christlike compassion. All of them—homeless, homeowners, shopkeepers, and city administrators alike. As I held steadfastly to the spiritual fact of there being one Mind only, I soon began to see more clearly that this two-minds/no-win mortal picture was not the true state of affairs for anyone in this or any other community. It was a denial of the divine law of the one Mind governing all. Mind's government was the spiritual reality.

I rejoiced in this true state of affairs—one all-intelligent cause resulting in one intelligent effect—until I was confident a solution providing care, peace, and safety for all concerned would become evident, even though I had no idea what that solution would be. So it came as no surprise when a recent follow-up article commended the borough's sense of brotherhood. The shelter had opened, neighbors' fears had vanished, and all was well.

Another challenge that day was a television news story on the thousands of infants born annually who are severely addicted to drugs and are too sick to return home. And their mothers are too sick to want to care for them. I must say that the television close-up of the desolate look in the eyes of a two-year-old who had never been cuddled seemed too much for me to unsee, even after reading, rereading, and pondering this promise in Science and Health by Mrs. Eddy: "A mother's affection cannot be weaned from her child, because the mother-love includes purity and constancy, both of which are immortal." Ibid., p. 60.

When our overflowing love for our neighbor is impelled by our genuine love of God, we share in tangible ways our Christly conviction that no problem is so deeply entrenched or entangled that it cannot be solved by the might of Mind, God.

I knew this was Love's message to me—the very one I needed to know then. Yet it seemed to be just words, so vivid was that visual image. I couldn't seem to rise above it to behold the spiritual reality—the purity, constancy, and everywhereness of God's mothering. But I was trying. Soon the Second Commandment came to my thought: "Thou shalt not make unto thee any graven image." Ex. 20:4. Why, of course. The mortal picture insisting on neglected babies and neglectful, addicted mothers had so impressed (engraved) itself on my thought that I was engulfed in it and feeling helpless. Once I realized this, I refused this claim—that material conditions can govern the spiritual man God created—and I knew I had divine authority for doing so. I prayerfully recognized the spiritual reality of man as Love's creation, lovely in every respect; as expressing Love's nature, wholly loving; and as under Love's control, always loved. The real man—our true being—is forever nourished by God's love and blossoming in it. Each day I grew to trust more the indestructibility of this pure and constant Mother-love until I was confident that neither a human mother nor her child could be denied its healing effect.

You can imagine how my heart filled with joy when I learned of a highly successful rehabilitation program for drug-addicted mothers—a program whose primary incentive and secret of success are purely and simply the mothers' love for their children. This love had been found to be strong even in cases where on the surface it hadn't seemed to exist. And through this approach both mothers and children could recover totally.

Now, you may be thinking that all this probably would have come about without my prayer. But of this I am sure: my love—and yours—of our fellow beings and our prayerful attention to their needs cannot return unto us void. Yes, there still are homeless people and addicted babies. But the above-mentioned improvements made in these areas are proof enough to me that God's irresistible law of love is actually at the center of our lives. It is innately attracting us all to Him as our creator and leading us to be obedient to His control. And I'm absolutely sure that my own prayer and the prayer of everyone who recognizes to any degree the supremacy of this divine law in the human realm are helping to lift mortal limitations from suffering humanity—limitations never imposed by a just and loving God.

In Ecclesiastes we read of one man whose wisdom saved his whole town from takeover by a king. See Eccl. 9:14, 15 . This "poor wise man" was no one of particular political or military importance. In fact, the Bible says no one even remembered him. But his love of community must have been so pure, so practical, so devoted, that his whole town felt it. And not even royal clout could resist it.

Whoever dedicates himself or herself to the constant and consistent recognition of the one Mind, God, and wraps his or her world in God's invariable love must be an influence for good in the community and in the world. For this is the portion-sending that eventually will heal all earthly woes permanently and surely. 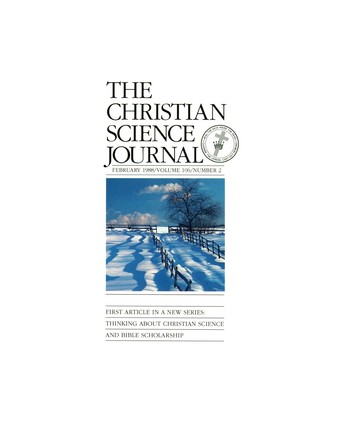 The inevitability of world peace

"The voice of the turtle [dove] is heard in our land"

Fidelity to God is not fanaticism

When a church is on its knees

The role of spiritual sense

What holds our lives together

The end toward which we look

A few years ago I noticed a growth on my back