If you could decide what the content and form of our periodicals would be like a year from now, what would they be? That may be a bit like asking, what is your “dream” car? For one person, the answer might well be a bright red sports car with all the bells and whistles. For another person, it might be a chauffeur-driven limousine, while another might choose the “greenest” car with the best gas mileage or highest use of new battery technologies. And of course, our answers might change dramatically if the question was changed to, “What car best meets your current needs?” or “What car can you best afford?”

These aren’t unlike the questions we’ve been wrestling with as we think about the future of our religious periodicals. Clearly, the only reason our magazines exist is to help spiritually-minded people better understand and put into practice the healing power of Christian Science. We think a great deal about the demand Mary Baker Eddy placed on her Church’s magazines to be “ably edited” and to be “kept abreast of the times.” Again and again, we find ourselves asking, “What are the needs of our readers today?”

Thirty years ago, very few of us would have thought about having a GPS navigational system in our cars, but for many people today, this feature has become so valuable that they’re willing to pay extra for it, while people who tend to drive mainly in familiar areas might well wonder why anyone would opt for such an “unnecessary” feature. Just so, in today’s digital age, we are increasingly hearing from readers who want to be able to access the message of Christian Science from a variety of digital platforms—desktop and mobile devices connected to the Internet—with more opportunities for interaction with the content and with other readers, while other subscribers wonder why anyone would ever want to read a magazine on anything but paper.

One thing we know for sure is that because our magazines are written by, read by, purchased by, and edited by our readers, we all have a stake in the form our evolving periodicals will take going forward. During the past 18 months, we’ve been thinking deeply about specific ways the Internet and digital platforms can be utilized to expand the content and accessibility of our magazines. Based on our insights and the input we’ve received from you, some of the needs we recognize our periodicals should provide for include:

• deeply metaphysical content with clear explanations and practical applications of Christian Science
• solid evidence of healing, primarily through strong testimonies
• timely and relevant information about Church activities
• great variety of opportunities for subscribers to be engaged in reading, writing, sharing, and exchanging healing ideas with others
• both paper-printed magazines and multiplatform digital access to content
• ability to search and research specific areas of interest
• pricing that recognizes the value of having inspiring and healing content, and assures the sustainability of the periodicals going forward

We’re not talking about abstract ideals. We are actively working to continue developing specific features and content to address these needs. Let’s mentally pick a Tuesday about a year from now and take a look at a “snapshot” of what we expect our readers to be able to experience on that day.

First of all, we recognize that for some subscribers, either because of lack of access to or interest in the Internet, very little will change. They will continue to read and share these magazines as before. For the person who is only interested in the paper copy of this magazine, he will be able to get his print version from the mailbox as usual on that Tuesday. And we will continue to love and be grateful for his support and commitment.

But across town from him on that same day, the experience for another subscriber will be quite different. In addition to the printed copy she has decided to include in her subscription, she also opens an e-mail on that Tuesday, which includes a timely message from a department of The Mother Church that she’s interested in. In that same e-mail, she reads a synopsis of several new Sentinel, Journal, and Herald articles that will be appearing on the website that day. One of those articles is dealing with an issue she’s been praying about, so she goes to the subscription area of the Journal, Sentinel, Herald website and reads the latest issue. She leaves feedback about the ideas shared in the article she read, and then searches all the “bound volumes” of previous issues to see what other articles have appeared on this same topic. One particular article from several years ago stands out as something a close friend of hers would be greatly helped by, and so she is able to e-mail the entire article to her friend.

Before she can finish reading the other articles she has found, she has to head off for work. While riding the train to the office, she pulls out her mobile device, (in this case, an iPad), and connects to the Internet in order to finish her reading. She’s particularly struck by a thought-provoking use of the word grace in an article, and clicks on a link that shows her how Mrs. Eddy has used the word in her published writings. Later that night, she is feeling so inspired by the ideas she’s been working with all day that she writes down several thoughts, which she feels she’d like to share with others. But because she’s never written an article for the periodicals before, she recalls that there are “field coaches” available to work with writers in print or online. So she contacts a “field coach” in her area, who proves to be an invaluable sounding board as she organizes and articulates her ideas. All in all, it proved to be a very productive and healing Tuesday! Within a short time she feels ready to submit her article to the editors. And just a few days later, her own article is on the web for others to read.

We don’t know if this is exactly what our readers’ experience will be like a year from now, but it is what we’re working toward. The final form will depend a great deal on the input, feedback, and support we receive from you along the way. So do keep in touch. And we will, too. Write us at cspsnews@csps.com. 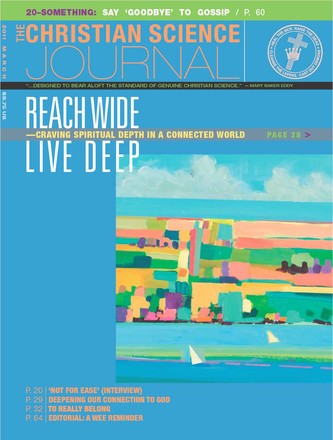