"You either are or aren't. You've either got it or you don't." This month, the Journal set out to debunk this and other myths about creativity—and to reveal the artist in each of us. Start by getting to the heart of art with Joni Overton-Jung. Then read what six other creative types told us about tapping into the divine source of all artistic endeavors: the one truly gifted hand.

Since my husband is a painter, new acquaintances often ask if I'm an artist, too. But while I certainly don't fit the traditional definition of an artist, I never feel completely honest saying no. For me, art has to do with inspiration on all levels—the inspiration it offers the audience, the inspiration that initially moves the artist to create, the source of that inspiration, which I think of as God. And so the degree that I'm open to that inspiration, that I'm appreciative of it and flexible to its demands, is the degree to which I find myself as an artist. That we all do.

Over the years, my appreciation of and love for art—and my participation in its various forms—have led me to see it as fundamentally spiritual. On the most basic level, this must be the case since Soul, one of the names Mary Baker Eddy used for God in her book Science and Health, conveys the idea that art and beauty and inspiration are inherent in the very nature of the Divine.

Art, in fact, is everywhere we look in this Soulscape—in the ordering of the constellations, the beautifying of the environment, the harmonizing of human interactions. And the Bible brings out a wonderful view of a creation that's alive with divine creativity. The book of Job, for instance, describes the morning stars as singing together, and "all the sons of God shout[ing] for joy." Job 38:7. This music that seems inherent in the universe itself expresses an amazing sense of God delighting in His creation. A delight that's manifested as color and creativity and beauty. And yet, that delight isn't a one-way street. Because the Bible also conveys a sense of creation marveling over creation itself—as well as over God specifically. And there, again, is art.

Art is interwoven in the very fabric of our being. To me, that's been one of the most freeing discoveries about it: that you don't even need to be the so-called "creative type" to participate in artistic expression. You don't need to be engaged in any of art's traditional forms in order to be an artist in the most authentic sense of the word. And that's why, when new acquaintances ask if I'm an artist, on some level I feel like I should say yes. In my best prayer moments, I feel that I am part of a dance. I'm one with that divine inspiration, which communicates itself to me just as it does to everyone.

Several years ago, my brothers asked how my guitar playing was going. For a while, the guitar had been something I'd devoted my attention to—and I loved it. But that day, when they asked how I was progressing, I had to admit that I hadn't really picked up the guitar recently. I still loved it; playing just wasn't where I was, mentally, at that point. I sensed their disappointment—puzzlement, even. Yet they understood when I said, "I'm not missing out. My life is filled with music. I've been amazed at the music in the silence of my prayers with God. I just haven't needed to play the guitar right now." I felt that day as though we'd all connected with the vision of the artist as it's expressed in Proverbs, as one who is "daily his [God's] delight, rejoicing always before him." Prov. 8:30.

Considered this way, it seems to me that being an artist is inherent in the adventure of living. That art is at the heart of life. One of art's important roles throughout history has been a role of protest. It's been used to shed light on that which needs to be uncovered. It's been a protest for something more. A protest for healing. And in its finest, most pure state, it's offered some aspect of transformation and transcendence. Isn't prayer, then, also a form of art? And isn't it as we pray that we connect with Soul on the most profound level?

In Science and Health, Mrs. Eddy described Jesus' prayers as "deep and conscientious protests of Truth,—of man's likeness to God and of man's unity with Truth and Love." Science and Health, p. 12. To me, that description communicates the idea that there's a divine demand—an impetus—that we not just buy into all the negative stuff that seems to be going on in our lives or in the world. That there is a way for us to protest or respond to it. And that this response brings, not just hope, but transformation.

One of the most compelling instances of this that I've seen in my own life occurred when I was living in Chicago and had become particularly aware of breast cancer in the news. So, during that month, I took some time every day to understand that disease in any form has no basis in God, so it has no basis in anyone's life. I prayed to understand that no one could be afraid of disease or tormented by it. And I affirmed, especially, that God embraces His children with peace and comfort—and that everyone can feel this embrace.

That month I also visited an installation at the local institute of contemporary art by a painter who'd documented her family's struggle with cancer. Her work showed sorrow and protest—a deep, earnest grappling to find healing and peace; the colors were amazing and the paintings were brilliant. I was so moved by them—by this sense I felt so tangibly of the Divine embracing the human. Those paintings communicated an intense sense of love for humanity—love that isn't remote, but that's in the midst. This was something I'd palpably felt in my prayers, but that seemed heightened now—all-embracing and elevating.

As I was leaving the exhibit, I passed a woman who was crying. When I stopped to speak with her, she said she'd just been diagnosed with breast cancer. In that moment, all the praying I'd been doing was like a wellspring. I simply had to throw my arms around her and affirm the integrity of her life. And that same month, I got a call for prayer from someone who also had a lump in her breast. Within two weeks it was completely healed, along with a number of other things in her life.

This, to me, encapsulates the nature of the work of the one infinite creative source—God Himself. In fact, not just this healing, but every transformation we see as the result of our prayers is evidence of the holy inspiration of Love protecting and adoring and celebrating its own. And that's the art we're all a part of.

Joni Overton-Jung is a Christian Science practitioner and teacher in Toronto, Ontario, Canada. 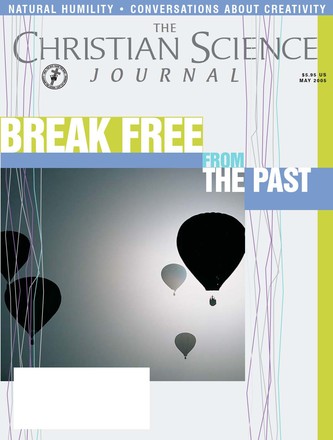 QUESTIONS: Does vegetarianism express a higher sense of right than eating animal flesh?

Less can be more

The ABC'S Of PRAYER

'Be still, and know that I am God'