The headlines broadcast the ethical failures of our times: a CEO goes to prison for malfeasance, financial officers squander the retirement funds of their company's employees, accounting firms are caught suggesting how to mislead investors who read the profit and loss statements. It's easy to wax righteous after the fact. But often during the demands of decisionmaking, the options don't seem so clear cut as they do once their consequences are played out. The fact is, a lot of ethical questions in business don't start out with an obvious right-versus-wrong kind of choice. Many times ethical dilemmas arise that seem to have valid arguments on both sides of the question. Then what do you do?

A friend of mine once traveled to a Middle Eastern country to bid a contract for his company—a contract that the company badly needed to maintain financial solvency. When he arrived, the country's financial secretary met with him to outline the conditions of the bidding: There were four other competitors, and the competing bids would be due the following day. The secretary made it perfectly clear that in order for him even to review the bid, a two-percent surcharge—read bribe—would be required. When my friend got to his hotel and checked with his competitors in the bidding, he was told that this was common practice in this part of the world. Furthermore, when he called home, his employer instructed him to do whatever was needed to have the bid reviewed. He reminded my friend that the livelihood of his fellow employees rested on his shoulders.

Paying a bribe didn't sit well with my friend, but he was beginning to wonder if his reluctance was based on anything more than his own parochial sense of ethics. Should he try to impose his culture's concepts of what was right, or should he simply comply with the adage, "When in Rome, do as the Romans do?" Besides, couldn't he just see the bribe as a cost of doing business and write it off as an expense? And then there was the whole matter of what could happen to his fellow employees if he refused to submit the contract under those terms. Most likely, people would lose their jobs. So what was he to do?

My friend always brought a particular book with him on business trips and he turned to it frequently for clarity and guidance. Its title? Science and Health with Key to the Scriptures, by Mary Baker Eddy. My friend remembered a passage in the book that referred to business. The passage outlines the results of understanding what the author called the "Science of being." This Science refers to the divine laws of God that govern the universe, including all men and women. Several phrases that outlined the benefits to individuals who sought this Science stood out to him: it "enlarges their perception of character," enables the human mind to escape "somewhat from itself," and "extends the atmosphere of thought, giving mortals access to broader and higher realms." Science and Health, p. 128. This is exactly what my friend felt he needed—a higher realm of thought, something that would enlarge his perception.

He soon realized that the real choice here wasn't whether or not to offer a bribe, but whether to see this finance secretary as corrupt or as expressing the integrity of his divine Principle, God. My friend's ethical choice came down to how he was going to characterize this other individual.

He decided simply to submit the bid in the spirit of respecting the secretary's spiritual integrity and his unity with his divine source. No monetary offer was made. My friend got a response back very quickly—so quickly that, for a moment, he assumed the secretary hadn't even looked at the bid. The note was hand delivered and contained only one sentence: "Your bid is accepted." During the time it took to fulfill the contract, the two men became close friends. And when my friend left the country many months later, the secretary took him aside and said that my friend's honesty and integrity had changed his life.

Trying to find a human formula for the right choice in the middle of an ethical dilemma can be challenging. But Science and Health sets out "a scientific system of ethics."

As this incident demonstrates, trying to find a human formula for the right choice in the midst of an ethical dilemma can be challenging. But the author of Science and Health referred to "a scientific system of ethics." Ibid., p. 464. A system that is always reliable. This system is perhaps best characterized in this passage: "The way through which immortality and life are learned is not ecclesiastical but Christian, not human but divine, not physical but metaphysical, not material but scientifically spiritual. Human philosophy, ethics, and superstition afford no demonstrable divine Principle by which mortals can escape from sin; yet to escape from sin, is what the Bible demands." Ibid., pp. 98-99.

A demonstrable divine Principle must ultimately base any system of ethics, and human reason, active as it is, is not always the best way to find it. A number of time-tested methods of demonstrating this divine Principle have carried the day, however. And when applied, they give a pretty clear sense of ethical direction:

• Follow unwaveringly an established truth that's based on the supremacy and love of God. One truth that appears in virtually all the world's wisdom traditions can be found in the Decalogue, the Ten Commandments. It's the very first of those Commandments—"Thou shalt have no other gods before me" Ex.20:3.—and it carries unsurpassed effects.

• Do unto others as you would have them do unto you. Another universally accepted standard, the Golden Rule, requires that we apply the same values to others that we would want applied to us.

• Look for the solution that blesses everyone. This standard takes the matter beyond the old adage, "Do what's best for the greatest number," to the higher spiritual perspective that whatever results from action impelled by divine Principle must bless everyone involved.

Mary Baker Eddy was no stranger to business ethics. Although it wasn't her aspiration, she ended up running an enterprise that included many elements of a large business. She eventually oversaw the fastest-growing religious movement of her day, and it incorporated a large publishing enterprise, a church with worldwide branches and a substantial budget, as well as a budding newspaper. In addition, she needed to provide guidance to ever-increasing numbers of practitioners and teachers of her healing method.

In her Manual of The Mother Church, Mrs. Eddy continually turned members to unselfish service rather than to personal gain. Holding that love for God and man should be the basis for healing and teaching, she encouraged Christian Science practitioners to charge fairly, to reduce their fees when healing is protracted or ineffective, not to monopolize the healing practice in one area, and to maintain strict confidentiality between patient and practitioner.

In an ever-changing world full of widely differing opinions, customs, and outlooks, clarity for thought and action is imperative. Mary Baker Eddy offered this by promoting what is perhaps the greatest ethical practice of all—utilizing divine intelligence, by which one can determine through one's connection with God, or divine Mind, what is right and wrong. In Science and Health, she showed how everyone can experience the divine rights of conscience, free from human opinion. People are "properly self-governed," she explained, only when they are "guided rightly and governed by [their] Maker, divine Truth and Love." Science and Health, p. 106. No better basis for business ethics exists. 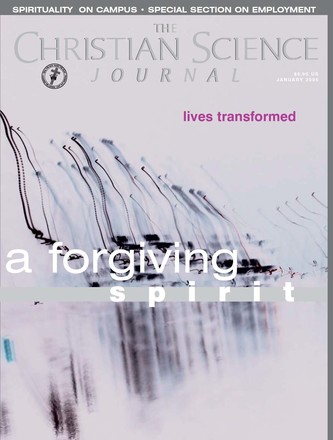 Q If God is all-powerful and causes only good, how can He allow powerful storms to cause devastation and even death?

The oldest gift in the Book

Not your typical rabbi

Out of place in the workplace? Not for long

Prayer on the ski slope

The grace of a forgiving heart

WOMEN AND RELIGION IN THE EDUCATION MIX