Mary Baker Eddy once gave a simple answer to the question of how to succeed in the practice of healing through prayer. “By being like Jesus,” she wrote, “by asking yourself am I honest? Am I just? Am I merciful? Am I pure? And being able to respond with your demonstrations to let what you can do for the sick answer this . . . .” Pointing to the underlying motives for healing ministry, she continued earnestly: “. . . if you are becoming what is required of you then are you a law to yourself and will ask am I doing to others as I would they should do to me? Am I seeking the praise of man or the praise of God? . . . if you are seeking money in your practice . . . more than you seek to be perfectly pure, honest, just, meek, and loving, then are you asking of sense instead of soul for happiness . . .” (A10063B, pp. 12–13, The Mary Baker Eddy Collection, The Mary Baker Eddy Library).

That answer, which comes from one of Mrs. Eddy’s earliest teaching manuscripts, made a deep impression on me when I came across it many years ago. Written long before she founded a church or came to prominence as a religious leader, the words have a tone of almost pounding urgency (“Am I honest? Am I just? Am I merciful? Am I pure?”). The questions shined a searchlight into my heart and conscience as a young Christian Scientist beginning to recognize the tremendous spiritual dimensions of this teaching, but struggling to live up to what I was glimpsing of new purpose and possibility.

The passage also gives a glimpse of Eddy’s deepest values in a period of struggle. It was a wilderness time for her, in both senses of the term, as she later characterized it in the Glossary of Science and Health with Key to the Scriptures: “Wilderness. Loneliness; doubt; darkness. Spontaneity of thought and idea; the vestibule in which a material sense of things disappears, and spiritual sense unfolds the great facts of existence” (p. 597).

Outwardly, little was going right. Eddy’s marriage was failing. She had no stable home and almost no income. Long periods of illness had closed off most of her early hopes and dreams. Spiritually, however, something had changed for her, with an experience of healing after an injury. Eddy wrote of this healing as leading her “into a new world of light and Life, a fresh universe” (Mary Baker Eddy, Retrospection and Introspection, p. 27). A remarkable description, considering the bleakness of her situation, it conveys the enormous impact of the illumined spiritual sense of God and creation that had begun to unfold.

In my own life, it has been in the wilderness times that Eddy’s example has come to mean most. When I’ve been shaken or discouraged, or just caught up in a closed circle of self-concern, her example has helped to call me back to deepest values. It is a reminder that the qualities of simple Christianity are what move a life forward, and that nothing else truly does. Eddy’s life shows us that the arc of our lives isn’t confined or determined by the world’s imprisoning expectations. Even in today’s secular environment, I’m deeply convinced that the same is true in the experience of churches.

I’ve also found it encouraging to realize that Eddy had the same inner struggles most of us do. Christian Scientists have sometimes had the idealized impression that she floated serenely over the challenges that confronted her after her discovery of Christian Science. We understand now that this wasn’t the case. Eddy writes in Science and Health of having to learn from “defeats” as well as “triumphs” (see p. 39). To me, the crucial point is that she did learn. She was willing to do the hard work of spiritual growing that makes healing ministry genuine. She showed in her later years that this growing doesn’t have to stop at a particular point or stage of life. It must not stop.

I’m still moved by Eddy’s wilderness exhortation for us to search our hearts. The fact that she had to struggle and grow doesn’t diminish her. It makes her a leader whom the rest of us can actually follow, not merely admire from a distance. Her earnest, urgent call to discipleship is still our starting point for discovering God’s fresh universe, and God’s beloved man—each one of us—as we really are. 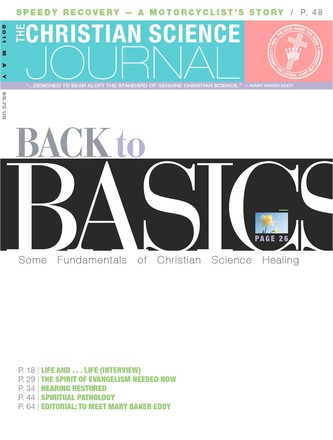 It would not be a stretch to say that every issue...

Why haven’t some of my problems been healed as quickly?

How does one advance spiritually in this age with the constant bombardment and temptations that come up in everyday living?

How can I be free of the necessity of taking pills?

Should I be praying only for those people who are congregating in the same edifice as I am?

What church membership means to me

Building and rebuilding in unity

FAQ on the healing practice

Rolling away the stone

By Scott Preller, on Behalf of the Board of Trustees | May 2011

By The Trustees of The Christian Science Publishing Society | May 2011

Some fundamentals of Christian Science healing

The spirit of evangelism needed now

A fresh look at Publisher's agent