Over a year ago I had an opportunity to go deeper into my “spiritual closet,” looking for greater understanding of what it means to be wholly spiritual. A rash had developed in an area on my skin that was visible to me, as well as others. The praying I engaged in was more wishful thinking that it would go away, rather than deeper declarations of my innocence and purity. With a greater commitment to understanding my unblemished nature as a child of God, I found that the condition began to improve. Then it stopped improving, grew worse, and covered a larger area.

I now admitted to myself that I recognized this condition as something that had occurred over a long period of time when I was a child and a teenager, causing me much torment and embarrassment among my peers. I remembered feelings of helplessness and shame, and the concept of banishment now came to thought. Though I certainly wanted this condition banished from my experience, perhaps there was a larger lesson to be learned.

I began to consider the fable in Genesis 2 and 3, involving banishment from paradise, or harmony—which I realized is impossible for any of God’s loved children. In this allegorical story of creation, Adam was cursed by God for being disobedient, as both he and Eve had been fooled, or beguiled, by the serpent. Consequently they were banished from the garden of Eden. I knew the serpent here represents mortal mind, which promotes material sense over spiritual sense.

Was I being beguiled—by symptoms? Could I possibly be kept out of the kingdom of heaven? In Genesis 1 it states that God saw that everything He had made was good (see verse 31). So the disguise of a suffering mortal condemned to suffer is what needed to go.

At various points the skin condition improved, then worsened. I began vigorous walking and adjusting my diet. It became clear that I was letting material belief govern my thought, determining the rules of the game.

I turned to the writings of Mary Baker Eddy for guidance, and I found this: “The laws of God, or divine Mind, obtain not in material phenomena, or phenomenal evil, which is lawless and traceable to mortal mind—human will divorced from Science” (The First Church of Christ, Scientist, and Miscellany, p. 349). Oh, so mortal mind and human will (diet, exercise, etc.) equate, and they’re both “divorced” from Christian Science! I wanted nothing more to do with that viewpoint, so I prayed deeply to see more clearly this differentiation. I began to see that the only reliable treatment was through spiritual means—not Spirit and matter combined. A passage from the Bible came to thought: “I shall be satisfied, when I awake, with thy likeness” (Psalms 17:15).

Still going deeper, I found this passage: “At best, matter is only a phenomenon of mortal mind, of which evil is the highest degree; …” (Mary Baker Eddy, Unity of Good, p. 50). I found myself willing to leave the matter model and human history behind, becoming awake to present good and its ability to vanquish the “enemy”—an enemy that was nonexistent when I was a child, and nonexistent now.

I became more confident, not just in what was true, but in why it was true. Now I could fully claim my true, pure, unblemished identity, and reclaim my place in the kingdom, from which I had never been banished. Within a few weeks, the skin condition disappeared, fully and finally, and it has never returned.

Later I ran across this statement of Mrs. Eddy’s, which summed up my experience perfectly: “Error uncondemned is not nullified. We must condemn the claim of error in every phase in order to prove it false, therefore unreal” (Message to The Mother Church for 1901, p. 15).

My gratitude for this healing is unbounded, for it taught me so much—namely, the how and why of spiritually based Mind-healing. The only cause is God, divine Mind, and beginning there is the right base and basis. We cannot suffer from anything that is truly and wholly God-caused and God-based. 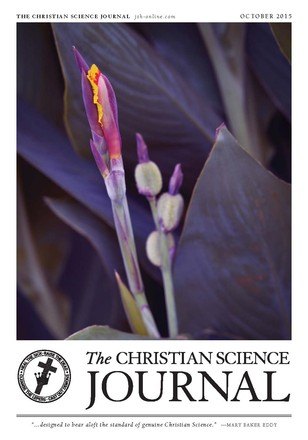 The healing power of moral law

Getting in tune with God

A childlike acceptance of healing

Building on the history of Christian Science healing

The Christian Science Monitor: a gift the world needs

‘Hearts given to a Cause’

Unselfing—strength to build and rebuild for the ages