A friend recently asked me, “What’s Christian Science’s view on resurrection?” I’m deeply grateful for his question because it invited me to explore what the writings of Mary Baker Eddy have to say about resurrection as well as to read several articles in the archive of the Christian Science periodicals on the subject.

Christian Science teaches the significance of Christ Jesus’ resurrection from the grave—his rising from and overcoming death (see, for example, the fifth tenet in Mrs. Eddy’s Science and Health with Key to the Scriptures, on page 497). These teachings also shed light on what brought about the resurrection of Jesus, and what can bring about a type of resurrection in our lives. In the Glossary of Science and Health, which gives the spiritual meaning of scriptural words, resurrection is defined this way: “Spiritualization of thought; a new and higher idea of immortality, or spiritual existence; material belief yielding to spiritual understanding” (p. 593). While this characterizes what Jesus demonstrated in his one-of-a-kind resurrection, it also describes what’s possible for us to experience at every point in our lives.

What is this spiritualization of thought? It is the purification of human thought, which leads us to drop the limited views and concepts of the material mentality that Science and Health names “mortal mind,” and accept immortal ideas revealed by the divine Mind, God. In other words, resurrection times occur when human thought is enlightened, which greatly improves one’s experience.

Throughout Jesus’ ministry, it was his pure spiritual discernment that enabled him to save others from sin, sickness, and death. And this ultimately led to the most profound act—his own actual rising from the grave. Science and Health states: “The resurrection of the great demonstrator of God’s power was the proof of his final triumph over body and matter, and gave full evidence of divine Science,—evidence so important to mortals” (p. 42).

This set the ultimate example for triumphing over matter and matter-based living. Now today, the eternal Christ, Truth, “the divine manifestation of God” (Science and Health, p. 583) that Jesus so fully expressed, uplifts and enlivens, resurrects and spiritualizes, our thought. This Truth enables us to rise above fearful and limiting beliefs to comprehend and experience more of our eternal immortality, which includes protection from sin, disease, and death.

For a long time, I believed what we are so commonly educated to believe, that we’re all mortal, but then I found Christian Science, which gave me a different view. It teaches that man, which is the spiritual identity of each of us, is always really immortal. Resurrection in our lives is not a one-time event, but the recurring rousing, or awakening, from mortal beliefs that happens many times before our total release from every belief of mortality. This resurrection or spiritualization of thought often appears as healing.

One of my early resurrection experiences, which I did not fully understand at the time, happened when I was 18, before I had found Christian Science. Though my parents stopped taking me to a Christian Sunday School during early elementary school, my sister and I sometimes went to a nondenominational church at a nearby university when we were in high school. The summer that I graduated, I really wanted to have a relationship with God—that is, if God was really real. I did a lot of silly things to try to see if God was real. Also, I sometimes tried to talk to God. It felt as though I probably was talking to a real God, but I wasn’t completely sure.

I was depressed a lot that summer, and I often snuck into my parents’ alcohol supply. I was working as a restaurant hostess at the time, and at the end of work one day I decided I didn’t want to live anymore. I felt life was just too hard. My plan was to drive into a lake.

Driving to the lake, however, I somehow flipped my mom’s convertible into a rock bank. The policeman who found me and took me home to my parents told them to be grateful that a miracle had occurred. He said the convertible top that was upside down should have caved in, but it hadn’t. The car was considered totaled, yet I didn’t even have a scratch on me! I am grateful to say I never tried to end my life again after that experience.

The fact that I had not been harmed in any way did make me feel God had taken care of me and so must be real, but I still didn’t understand much about God. It wasn’t until after a decade and a half later, when I began to seriously study and practice Christian Science, that I began to realize why I hadn’t been hurt. It was because life is really not mortal, but immortal—as Jesus proved. In other words, God is my real Life.

As I am now recalling this experience, I feel it was a resurrection because, progressively, it has contributed to my gaining a clearer understanding of what real Life, our real, spiritual existence, is.

Science and Health offers many clear statements about real Life. The chapter “Recapitulation,” which summarizes the core teachings of Christian Science, includes, “This Science teaches man that God is the only Life, and that this Life is Truth and Love; that God is to be understood, adored, and demonstrated. . .” (pp. 471–472). There are also many other references to God being the only Life, and growing in the understanding of this fact through the years has brought me so many wonderful healings, and transformed how I perceive things.

Another resurrecting healing occurred when my two daughters (who were in elementary school) and I were exploring some land near a park where an old, vacated house was literally falling apart. I heard one of my daughters scream and loudly cry out for me. As I approached her, she showed me a board attached to her shoe. While immediately comforting and reassuring her, I gently pulled on the board to remove it and helped her up. The board had a nail attached to it. As I held my daughter in my arms, right away I reached out to God in prayer.

Instantly and very clearly I was reminded that God was this child’s real Father and Mother! The thought immediately followed that God was always with her and would not let harm come to her. Alarming fears of possible infection were very quickly and firmly removed from my thought. This wasn’t wishful thinking on my part, but truly divine assurances of God’s all-power giving me peace. I remembered Christian Science healings both daughters had already experienced and remained so encouraged. I suggested she and her sister and I sing hymns from the Christian Science Hymnal on our way back to the car.

At first we walked really slowly, and she was limping a lot, but as the beautiful and immortal truths in the hymns lifted our thinking and enabled us to feel more of the grace of God, the limping lessened more and more. By the time we reached our car, there was not even the slightest limp.

When we got home, this grateful girl ran into her room and then rushed out to me, holding her shoe and sock, which both had holes. Then, she sat on the floor and turned her foot so I could also see there was no evidence of injury, no nail mark! I could clearly see that was the case. Our prayerful dwelling on God’s thoughts had displaced fear and concern, and likewise, any related evidence. That day our thinking was spiritualized by turning to, and recognizing, the presence of divine Love, and by deeply feeling the truths in the hymns we sang. So, for me, this is one of so many examples of resurrecting healings our family has experienced through Christian Science.

Now, to bring closure to the question I was asked about resurrection—I understand a key meaning of resurrection in Christian Science is the ongoing, daily, God-inspired spiritualization of thought and experience gained through studying and living the divine Science, the laws of God, that Jesus taught and demonstrated and that Mrs. Eddy discovered, proved herself, and shared with the world.

Science and Health states: “In proportion as the belief disappears that life and intelligence are in or of matter, the immortal facts of being are seen, and their only idea or intelligence is in God. Spirit is reached only through the understanding and demonstration of eternal Life and Truth and Love” (p. 279). I am beyond words grateful for all of my own spiritualization-of-thought experiences that have grown, and continue to grow, my “understanding and demonstration of eternal Life and Truth and Love.” Mrs. Eddy so clearly emphasizes the importance of spiritualization of thought: “Nothing aside from the spiritualization—yea, the highest Christianization—of thought and desire, can give the true perception of God and divine Science, that results in health, happiness, and holiness” (Miscellaneous Writings 1883–1896, p. 15). And I have so much gratitude for Christ for being ever with us, continuously spiritualizing thought! 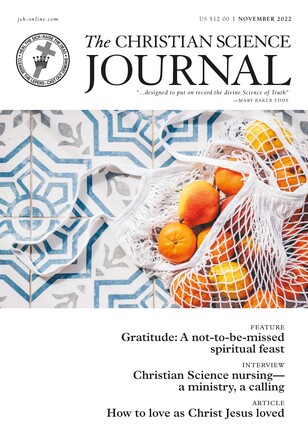 By Vanessa Campbell with contributions from Tony Lobl | November 2022

How to love as Christ Jesus loved

Can we really “pray without ceasing”?

Beyond material appearances to spiritual reality

Our reason for existing

The smudge on the mirror

Prayer and protection in a storm

Music on the island

Finding and loving our church home