How is it that we can be, and are, lifted out of the stark belief in mortality and death through prayer? The answer is explained in the substance of my walk out of darkness into the light following my husband’s passing after a long, happy marriage.

The Science of being, based on the forever-present fact of God’s allness, and this allness being reflected in immortal life, is always asserting itself right where a sense of futility, loss, and abject grief suggests itself to human consciousness.

Here is how the blessings of this Science carried me through “the valley of the shadow of death” (Psalms 23:4).

Mortal mind, “nothing claiming to be something” (Mary Baker Eddy, Science and Health with Key to the Scriptures, p. 591), argued that loss was real and that I was adrift without my companion. The Science of being declared, in the words of Mary Baker Eddy, the Discoverer of Christian Science, “Where God is we can meet, and where God is we can never part” (The First Church of Christ, Scientist, and Miscellany, p. 131). I worked to better understand the falsity of the first argument, that loss is real, and the truth of the second, that there is no separation.

An interview on a Sentinel Radio broadcast helped combat the aggressive suggestion of loneliness. The CD of the program, which I played over and over again, included an account of a woman who had faced a similar situation. The God-sent message that had come to her, countering a sense of loss, was “This isn’t what you think it is.” That powerful statement arrested the deep angst that had been trying to possess my thought. Its comfort lay in the understanding that I have an unbreakable relationship to the husbanding love of my Father-Mother God. That fact helped establish that no loss had happened in God’s allness; I had not lost love or companionship. That was the truth, beyond erroneous human reasoning, and it was oh-so-precious evidence of my own God-given consciousness.

Still, in the first few weeks following my husband’s passing, the claim of loss attempted to find expression in subtle ways—such as leaving my purse in a grocery cart in a busy parking lot. I discovered that my purse was missing after having already driven several miles toward my home, and I headed back to the store in tears. Mortality screeched and hollered, “God, please help me!” As I drove back to the store, the light of Truth pierced that mesmerized pleading. Calm prevailed as my tone went from panicked to grateful, and I prayed: “Thank you, God, for Your present help! Thank you, God. This is Your day. Thank you, God, that all is well!”

Pulling into the parking lot, I saw that a group I had noticed earlier was loitering in the area. I had felt intimidated by the members of this group when I had left the store earlier, but this time I saw them as friends and addressed them in that light.

When I inquired if they had seen the purse, their answer was in the negative, followed by a gentle directive to go to the customer service counter, which was already what I had in mind. The purse had been retrieved from the parking lot by an anonymous party and turned in with everything intact. The claim of loss had been disproved. I clearly felt the light of the Christ in my thought, shifting it from anguish to gratitude.

This experience was followed shortly by an invitation from family members to dine at a favorite restaurant. Two days after that dinner, when I was looking for my billfold, it appeared that it was missing. I made a frantic effort to recall where I might have left it and remembered the evening at the restaurant. I called and asked for the lost-and-found. The employee looked and said that he could only find sunglasses and other small items.

The Science of being, though, was governing as always. Just as the employee was about to hang up, he asked me to wait. He had recalled the company rule that anything of importance should be placed in the safe if found unattended. I had visited the restaurant on a very busy night, and the found item had not yet been reported to the management. Therefore, there had been no follow-through to inform me that the billfold was in their custody. But the light of Truth, namely, divine intelligence, prevailed once again. The billfold was retrieved intact. By then, the claim of loss was not so subtle! From then on, I was prayerfully alert to its more blatant claims.

For several months after that point, I worked to pack up the home I had shared with my husband. Friends and family were there to help, and what seemed like an insurmountable task unfolded according to omniscient Mind’s directing. Love was certainly at work, and I felt an outpouring of affection that I’d never before experienced. Our wonderful hymns from the Christian Science Hymnal rang in my ears: “It matters not what be thy lot, / So Love doth guide; …” “O gentle presence, peace and joy and power; / O Life divine, that owns each waiting hour ….” “Shepherd, show me how to go / O’er the hillside steep …” (Mary Baker Eddy, Nos. 160, 207, 304). These words proved to me that God, good, is the foundation of my being.

Our home was put up for sale just as the financial bubble appeared to be bursting. It looked to be sold after four days, but the first potential buyers backed out at the end of the contingency period. I was actually grateful for this turn of events, because there was still a fair amount of sorting and distributing of items to do before I would be ready to move. I was spared the challenge of doing that chore at some storage unit.

Meanwhile, a fresh sense of home, a greater awareness that I do indeed dwell in the consciousness of Love (see Science and Health, p. 578), led to the purchase of a new place to live. When I was ready to leave my old home, new buyers appeared. But about three days before the contingency period closed, my real estate agent called to say that the buyers were revising their offer. I drove down to his office to review this new offer. Mortality suggested that greed could govern my well-being. The buyers’ new offer was for many thousands of dollars less than their original offer.

Reasoning that the value of the home was going down each day and that I had already purchased another place, I briefly entertained the false thought that the buyers had me between a rock and a hard place. It seemed that the best option was for me to agree to the new offer. However, as I left the real estate agent’s office and was getting into my car, the agent came running out to the parking lot, saying that while we had been preparing to capitulate to the buyers, a new offer had come in with no contingency clause. He then informed the buyers that their revised offer had been refused.

According to state law, the buyers now had the option to withdraw their revised offer, which they did. They agreed to return to the price they had originally offered to pay, which I had previously accepted. I was not hurt financially. My sense of supply was in perfect sync with divine Principle. It confirmed for me that God’s loving presence had been lighting my way the whole time—I realized that I was not dimmed by grief; rather, I was being nurtured and protected by my Father-Mother every moment.

With deep humility and gratitude, I praise God that we are never out of the light of His constant care. The scientific fact that “God is everywhere, and nothing apart from Him is present or has power” (Science and Health, p. 473) allows for no mental darkness to proffer a life apart from God. And while the journey did not seem easy, the rewards of learning more fully that “Life divine … owns each waiting hour” brought me out of the darkness, and into the light of Christianly scientific demonstration. 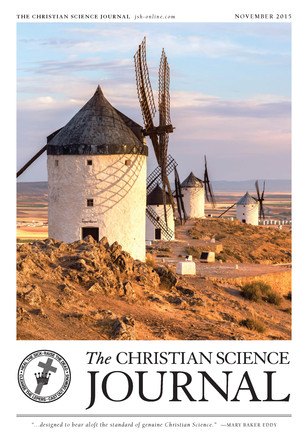 Getting to know God better

John Rinnert interviewed by the Journal’s Will Pappas | November 2015

The fall of Jericho

Choosing good as the reality

Jesus fed them all

In praise of praise

To wait on God

Lifted out of sorrow and loss

Gratitude for generations of healing

Back again after transfer

Does God have your soul mate planned out for you?