Mrs. Eddy's answer to the question "What are body and Soul?" provides a thought-provoking definition of man's spiritual identity. She says: "Identity is the reflection of Spirit, the reflection in multifarious forms of the living Principle, Love. Soul is the substance, Life, and intelligence of man, which is individualized, but not in matter." Science and Health, p.477;

Man, the image and likeness of God, is the compound idea of divine Mind. Through divine reflection each one manifests, in a unique combination, the endless range of the qualities of the one creator, God. This individual expression of God's qualities, this embodiment of the attributes of Mind, constitutes one's spiritual identity, his real body.

Human thought is so accustomed to thinking of "body" in terms of physicality and personality that it seems difficult to divorce the concept of body from material form. But man's spiritual identity, his real and only true body, is not material, yet has form, outline, distinctness, substantiality.

Mrs. Eddy's answer to another question throws light on the relationship of an individual's spiritual identity and his visible, material body. Asked: "If mortal mind and body are myths, what is the connection between them and real identity, and why are there as many identities as mortal bodies?" she says, "Every material belief hints the existence of spiritual reality; and if mortals are instructed in spiritual things, it will be seen that material belief, in all its manifestations, reversed, will be found the type and representative of verities priceless, eternal, and just at hand." Miscellaneous Writings, pp.60,61;

Man has not two bodies, one material and the other spiritual. The spiritually scientific method of outgrowing the limited, material, counterfeit concept of body is to increase one's understanding of one's present spiritual identity.

Through searching study of the Bible and Mrs. Eddy's writings, one increases in spiritual understanding of his true nature. He learns to reverse the beliefs of life and intelligence in matter and to discern more clearly the spiritual counterfacts at which the material appearance hints.

Increasing perception of the spiritual nature of function, hearing, beauty, form, and other attributes causes them to appear as harmonious present conditions of one's growing awareness of his own true being, his individual identity. They are never in matter but eternally exist; and they can be evidenced right where mortal belief seems to usurp man's glorious and perfect identity as God's compound idea.

Constant progress can be made in learning one's freedom from all kinds of material thinking—of evil claiming the power and wisdom of good. The limited mind of mortals suggests many beliefs about its mistaken concept of man. Such beliefs range from the lie that mortal man is a creator, and hence transmits negative traits from mortal ancestors, to countless other limiting beliefs of time, the supposed reality of matter, and subjection to mortal environment and emotional patterns.

Accepting the falsity of mortality and separation from God leads mankind to believe in fear, anger, disappointment, anxiety, sin, sickness, death. Such false thinking embodies itself in tired, aging, sick, material bodies. Prayerfully turning from such errors to divine Mind, the one creator, to learn of man's spiritual, eternal unity with God progressively eliminates material beliefs and simultaneously frees the body from the effects of such misconceptions.

As spiritual, right concepts of man in God's image replace the beliefs of mortality, harmony and health inevitably replace discord and disease. Comprehending more clearly the nature of man's spiritual identity eliminates subjection to a corporeal sense of body and brings into present experience clearer recognition of one's real being.

Other false concepts of mortal thinking also need replacing with spiritual ideas. A feeling of genuine love toward one's neighbor, for instance, brings into surer focus man's spiritual identity and has a corresponding healing effect. The body responds constructively to kind and merciful thinking but discordantly to resentment, unkindness, envy, criticism. Harmonious control of the body is increasingly gained as one's thought more consistently and constantly expresses qualities of forbearance, compassion, forgiveness, dominion.

Mortal mind, or limited, material thinking, views the human body as a power vacuum where God is not present because physicality is present. But God is omnipresent even where matter seems to be, and a growing recognition of His omnipresence annihilates the false belief in His absence, and brings a discernment of true substance, of health, harmony, agelessness, as the present reality of one's being, of one's real body, one's identity, here and now.

Christ Jesus, who demonstrated so marvelously the practical and healing concept of man's true identity, said, "The light of the body is the eye: therefore when thine eye is single, thy whole body also is full of light; but when thine eye is evil, thy body also is full of darkness."Luke 11:34; The more we gain that singleness of spiritual perception which makes us aware of our true identity as God's offspring, the more we will manifest the qualities of our real selfhood.

When Jesus encountered a man born blind, Jesus' understanding of God and of man's spiritual sonship with God was so true that he healed the man, who was then able to see clearly. This healing was not a process of spiritualizing the man's material eyes. Jesus' scientific prayer, his ability to see man's present perfection as God's offspring, revealed the man's spiritually perfect vision. Man's real identity includes perfect vision; a belief in matter never touches man's true vision; matter neither imparts nor hinders vision. Understanding the reality of spiritual vision reveals man's expression of this God-given faculty here and now.

Understanding true being frees one from circumscribing his identity within the limitations of mortal birth, education, chance, lost opportunities. Learning that the source of his true nature is Spirit, God, the individual finds right ideas of supply, companionship, his talents, and the ability and opportunity to express them. Mortal circumstances neither supply nor limit the infinite range of God's ideas. These spiritual ideas heal and enlarge one's present experience.

Paul wrote to the Roman Christians: "I beseech you therefore, brethren, by the mercies of God, that ye present your bodies a living sacrifice, holy, acceptable unto God, which is your reasonable service. And be not conformed to this world: but be ye transformed by the renewing of your mind, that ye may prove what is that good, and acceptable, and perfect, will of God."Rom. 12:1,2.

As each one is willing to allow God, divine Truth, to renew his thinking—as he is willing to cease conforming to mortal belief—he increasingly experiences not only freedom from the downward pull of materialism but also renewal and enlargement of his entire experience. He thus finds himself in his spiritual identity as the reflection of Soul, God. 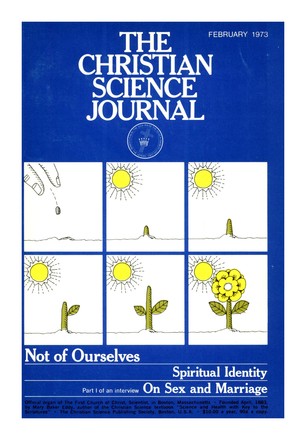 "One fold, and one shepherd"

What Are We Praying For?

On Sex and Marriage

Let the word of Christ dwell in you richly

Are We Loving the Real Man?

"If it's love they need, they will find it here"

How I Study the Lesson-Sermon

The Development of the Later Judean Ministry

The Editors Talk: on Wednesday Meetings

This testimony is given in humble gratitude...

Four summers ago, while vacationing...

I am increasingly grateful for the practicality...

For many years the testimonies in the...

Christian Science was presented to me...