The Glossary in Science and Health with Key to the Scriptures by Mary Baker Eddy is one of my favorite chapters in the whole book. Studying the Glossary, which defines key biblical terms in their metaphysical meaning, naturally opens thought to a more expansive view of the world around us. Through the words and concepts it defines, the Glossary helps reveal the spiritual substance behind everything we see, giving us a spiritual understanding of the universe. The chapter does this because each definition—as Eddy says about Divine Science—rises “above physical theories, excludes matter, resolves things into thoughts, and replaces the objects of material sense with spiritual ideas” (Science and Health, p. 123).

For instance, years ago, I was learning to white-water kayak. I decided to study Eddy’s definition of river given in the Glossary. It reads: “Channel of thought. When smooth and unobstructed, it typifies the course of Truth; but muddy, foaming, and dashing, it is a type of error” (p. 593). Although this definition references “river” as mentioned in the Bible, it nevertheless helped me understand my contemporary adventure perfectly.

I found that the way I thought of the rivers I kayaked made all the difference. If I was afraid of the rapids, I would become so stirred up that all I could see was “muddy, foaming, and dashing” water, and I was too scared to paddle. In contrast, I realized that when I was peaceful and focused, I consistently discovered calm eddies, or “smooth and unobstructed” spots in the river. When I found these eddies, I could take pauses as I kayaked so that I traveled down the rapids at a progressive yet controlled speed.

A river eddy is often located just behind a rock. The Glossary defines rock: “Spiritual foundation; Truth. Coldness and stubbornness” (p. 593). This definition gave me even deeper insight into white-water kayaking. If I hid in an eddy, not wanting to move out into the current of the river, I wouldn’t get anywhere. So, I came to see that the rock that created the eddy could either serve as a solid spiritual foundation from which I gained the courage I needed to move down river, or, if I became fearful, the rock would be a place of coldness and stubbornness, from which I wouldn’t progress.

As we stop and listen to God to reveal to us who we are, we get wonderful glimpses into our true nature. We see our infinite potential as God’s divine creation.

The Glossary is not, however, limited to objects like rivers and rocks. It contains spiritual definitions in relation to people, too—bride, bridegroom, and man, among other terms. In the same way that I gained a spiritual sense of rivers because of the Glossary, I have also used this chapter to discover more about myself, as a means to define myself spiritually. I have asked myself what a prayerfully inspired definition of me would be. The Glossary gives an answer by defining man, a term for all men and women, as “the compound idea of infinite Spirit; the spiritual image and likeness of God; the full representation of Mind” (p. 591).

God, omnipotent Mind, already knows everything about us. It isn’t up to us to show God who we are. As we read in the Bible, “I know the thoughts that I think toward you, saith the Lord, thoughts of peace, and not of evil, to give you an expected end” (Jeremiah 29:11). As we stop and listen to God to reveal to us who we are, we get wonderful glimpses into our true nature. We see our infinite potential as God’s divine creation.

Years ago, I learned a lesson in the importance of listening for God’s definition of me. In my 20s, I found myself addicted to cigarette smoking. While I knew this was not a healthy habit, I still accepted it as part of who I was, even if I didn’t like it. I defined myself as a “smoker.” This label did not fit with my spiritual and moral beliefs, so I knew something needed to change. I struggled to quit the habit through various strategies—slow withdrawal, quitting cold turkey, a nicotine patch, and more. Nothing worked.

But one day I prayed about the smoking. I listened quietly for what God was telling me. Then, an idea came gently into my thought: “I am not a smoker.” What a simple idea! Yet, it was a news flash for me. This gentle message from divine Love came with such comforting assurance and authority that I couldn’t dismiss it. I had received a small glimpse of how God sees me, as one of His cherished children, pure and perfect. This thought from God was a light that removed the dark belief that I was a smoker.

Although the human evidence said that I smoked, the divine message I received eclipsed that evidence. You may be able to guess what happened next: I found freedom from smoking. The habit no longer felt natural or normal, and it simply lost its appeal. I experienced no withdrawal. My life conformed naturally and gracefully to the way God defines me, as free from a smoking addiction.

When I think about how a spiritual, inspired definition of myself effortlessly corrected the human label of “smoker,” I call this experience my “Glossary healing.” As I listened for God’s view of me, I was redefined, transformed, in what the Apostle Paul described as “the twinkling of an eye” (I Corinthians 15:52).

Today, the struggle I went through years ago feels like a distant dream. Since this healing occurred, I have been unable even to imagine myself as a smoker. People who know me today tell me they have a hard time believing that I once struggled with a smoking addiction. By allowing God’s view of my innate purity to define me, all I could experience was freedom.

Paul wrote, “Be not conformed to this world: but be ye transformed by the renewing of your mind, that ye may prove what is that good, and acceptable, and perfect, will of God” (Romans 12:2). The Glossary, a crucial chapter in Science and Health, helps readers follow Paul’s advice to be transformed by understanding God’s view of His entire creation. 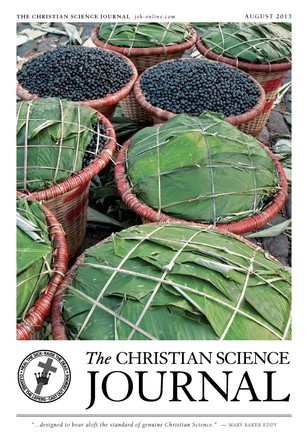 Changes to the Journal Directory

Getting beyond segregated Sundays

Bettie B. Thompson interviewed by the Journal’s Roger Gordon | August 2013

It’s not about the intellect

The ‘science’ of Christian Science

From the Clerk of The Mother Church | August 2013

My hearing is perfect

No evidence of detached retinas

Why is it that sometimes people are unable to reach Christian Science practitioners?

The Christian Science Monitor—How it blessed a family