How do you write a book? If you've Andrew Clements, you know the "how" begins with looking for the story in a character, an idea, a situation, or a setting. And then it involves picking up your frindle and starting to ... Wait a minute! A frindle? What's that? If you've read Mr. Clements's book by the same name—Frindle—you know it's the word that Nicholas Allen, the main character, came up with when he wanted to try an experiment with the dictionary. If you haven't read the book, you can get to know the author of Frindle—and then go find the book at your local library or bookstore. Mr. Clements talked with the Journal's Jenny Sawyer.

Frindle, like all your books, started out as an idea. But where did that idea come from?

It actually came out of a conversation I had with some students at a school where I was a visiting author. (you can read more about this at www.Frindle.com.) But as for where my ideas come from in general, I'd have to say they come from all over. Being a writer partly means observing the world around you and asking questions about what you see.

It also means being a good listener. Every day, before I write, I spend time reading the Bible and another book, Science and Health with Key to the Scriptures. I also spend time praying and listening. What am I listening for? ideas from God. I'm not necessarily talking about ideas for my stories, here, although I'm not surprised when those come. What my listening really helps me do is understand more about God and more about the way God made me. And that understanding—that I'm creative and intelligent and humble, the reflection of God—is really what helps me the most in my work.

Then when I sit down to write, I keep listening. A big part of what I do—even before my fingers touch the computer keyboard—is just asking: What is the right story to tell? What is a good story to tell? And then I need to be open to whatever I hear God telling me about that.

When I begin writing, I'll start with the idea I've heard, or a scene I've seen that interests me, or a character I want to get to know. And then I see where that leads. Often, I'll be three or four months into writing a novel before I figure out what it's actually about. So the listening really never stops.

How do you know that a character or an idea will actually turn into a real story?

I recently told a group of people that writing is an act of faith. It's having faith that some words are better than others, and that some combinations of words are better than others. And as you sit down to write, you're saying, in a way, "I have faith. I believe that I can find that right set of words that will be better than some other set of words. I believe that these words will communicate something worth listening to. And I have faith that if I actually do spend time and thought and effort, and exercise my own good qualities, the result will have been worth the time. And that the writing will find an audience. And that it will do everything else it's supposed to do as a finished product."

But writing does take work and persistence. That's why I really like what Mary Baker Eddy said in Science and Health about what it takes to accomplish anything worthwhile. In this part, she was actually talking about healing, but she finished up by saying, "self-denial, sincerity, Christianity, and persistence alone win the prize, as they usually do in every department of life." Science and Health, p. 462. I think about those qualities a lot as I write.

Do you ever get stuck?

I think every writer has times when they wonder: What's next? But actually, that's a very good question to ask. Often, when kids ask me, What do you do about writer's block? I tell them that the way you write a book or a story or a newspaper article—or whatever you happen to be writing—is to keep asking one question over and over. And the question is just three words: What happens next? I think writer's block is the suggestion that nothing could possibly happen next, and that simply isn't true.

So as I write, I start with an idea that feels good, that feels right. And then I say, OK, I've got this character, where's he or she going to be? You have to make some decisions. But ultimately, you have a character, you have a setting, you have a rough idea of what's going to happen. And then you start things in motion with one simple event: John woke up. OK, what happens next? So you have to sort of jump into the middle of a story, because every story starts in the middle of something. And then you ask that vital question—and go from there.

How do you become a better writer?

Two words: Read. Write. The more good books you read, the more you learn what good writing sounds like. Then you can start to think about what you're reading and to ask yourself questions. For instance, you might think, when I get to the end of this story, I just want to smile. What is the author doing to make me feel that way? Because everything that happens in a book happens on purpose. Every word is chosen on purpose. And when you start to understand what that purpose is, you start understanding what it means to be a writer.

Second, you can't be a writer if you don't write. So spend some time at it, and figure out if it's what you really like to do. Practicing writing is so helpful, because writing forces you to think clearly, to get your words so well organized that someone a thousand miles away, with just the words on a paper or a screen, can understand what those words are really saying.

A thousand years from now, no one reading your book will be able to hear your voice or see your gestures. You'll need the words to communicate effectively. But think about it: You've got a great model! Think about David when he wrote, "The Lord is my shepherd; I shall not want." Ps. 23:1. He captured that caring, patient, providing nature of God so well. Because when you read it, you get it. You understand exactly what he means, and not just the words, but the spirit of it. That was a long time ago, but the words have survived and have meant so much to so many people, because he did what a good writer and thinker does. He listened to God, and then he did whatever it took to get the words just right. 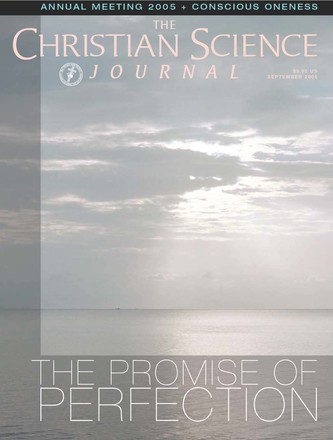 Be ye therefore what?

ADVERSITY CAN BE TURNED INTO A BLESSING

From fable to fact

with contributions from Chet Manchester | September 2005

THE PROMISE OF PERFECTION