The following from the pen of Rev. Mary Baker G. Eddy appeared in The Boston Herald on the 17th inst.

To the Editor of The Herald.

On the subject of reporting contagion I have this to say: I have always believed that Christian Scientists should be law abiding; and, actuated by this conviction, I authorized the following statement, which appeared in The Boston Herald about one year ago:—

"Rather than quarrel over vaccination, I recommend that if the law demand an individual to submit to this process, he obey the law; and then appeal to the gospel to save him from any bad results. Whatever changes belong to this century, or any epoch, we may safely submit to the providence of God, to common justice, individual rights and governmental usages."

This statement should be so interpreted as to apply, on the basis of Christian Science, to the reporting of contagion to the proper authorities when the law so requires. When Jesus was questioned about obeying the human law, he declared: "Render unto Cæsar the things that are Cæsar's," even while you "render unto God the things that are God's." 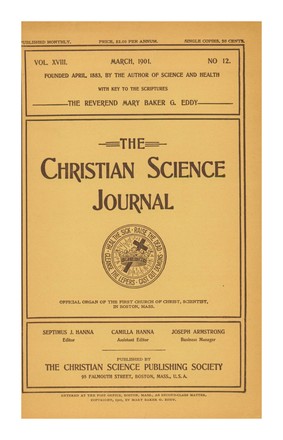 A MEETING IN MEMORIAM

with contributions from Christian Science Board of Education | March 1901

A DISCOURSE ON CHRISTIAN SCIENCE

FROM DARKNESS TO LIGHT

THE SONG OF MY HEART

BROOK FARM AND THE TRANSCENDENTALIST

A STUDENT OF SCIENCE AND HEALTH

It is nearly three years since I first heard of Christian Science...

I would like to tell the Journal of the healing of my...

About five years ago Christian Science came into my...

While I am not a member of the Christian Science...

On the 28th of last November I had nineteen teeth...