Looking to be a better healer? Then you’ll want to keep an eye out for articles like this one, appearing periodically in The Christian Science Journal, Sentinel, and Herald. Their aim: to correct some of the misconceptions about Christian Science that would keep us from having the results we so desire.

Early in my study of Christian Science, I called a Christian Science practitioner for metaphysical treatment for a physical problem. The next day, some of the symptoms had abated somewhat. I called the practitioner to report the good news, but his response was that we never want to base any conclusions, good or bad, on material evidence.

I was quite taken aback because I had relied on material medicine before becoming a Christian Scientist, and so I had been accustomed to paying attention to the physical evidence of a problem. And now a lessening of the symptoms of sickness was giving me hope and encouragement. But I also realized, upon thinking more about what he had said, that I was, in fact, depending upon material sensation to tell me how I felt. In other words, I was measuring my health, well-being, safety, and happiness by what the five physical senses were reporting.

And no wonder! The popular belief is that to achieve health and well-being, we have to focus on our body. Paying close attention to material evidence is considered essential to keep oneself healthy and safe. So it seemed hard to me, at the time, and uncomfortably radical, not to have some sort of physical marker that would tell me if I was getting worse or getting better.

At the same time, though, something in me rebelled against the belief that identity is defined by matter, and that it determines our prospects for a safe and healthy life. The view that each one of us is entirely biological does not even begin to touch mankind’s deepest intuitions that our existence is so much more than what physiological definitions tell us.

Christ Jesus was definitely not influenced by material evidence. For example, we read in the Bible that a leper came to him, “beseeching him, and kneeling down to him, and saying unto him, If thou wilt, thou canst make me clean.” The account continues, “And Jesus, moved with compassion, put forth his hand, and touched him, and saith unto him, I will; be thou clean. And as soon as he had spoken, immediately the leprosy departed from him, and he was cleansed” (Mark 1:40–42).

That he reached out and touched the leper illustrates the fact that Jesus completely disregarded his culture’s convictions that the man was religiously unclean. How could Jesus act in such defiance of the prevailing norms of his day? Mary Baker Eddy, the Founder of Christian Science, explains: “It was the consummate naturalness of Truth in the mind of Jesus, that made his healing easy and instantaneous. Jesus regarded good as the normal state of man, and evil as the abnormal; holiness, life, and health as the better representatives of God than sin, disease, and death. The master Metaphysician understood omnipotence to be All-power: because Spirit was to him All-in-all, matter was palpably an error of premise and conclusion, while God was the only substance, Life, and intelligence of man” (Miscellaneous Writings 1883–1896, p. 200).

In my own experience, my initial hesitancy to give up my reliance on material evidence was gradually overcome by putting more trust in Spirit, God, than in matter. Still not feeling completely well and struggling with the demands of a busy household, I was doing chores one day and, frankly, just wishing I felt better, when these words came to me: “If you would just accept all that you have been reading, you would feel better.” I had been reading and studying the Bible and Mrs. Eddy’s writings. Why shouldn’t I accept the truths I’d been reading and learning about? I decided to set aside my fears, and I continued my chores with an uplifted heart. As I completed my tasks, the sickness quickly faded, and it did not return.

If we really were merely physical beings, there would be no exceptions to the operation of so-called material laws. But there are exceptions. People do experience healings that fall outside the expected norms. The Bible is full of these. And the Christian Science periodicals contain a record of well over one hundred years of such healing. People everywhere, in all kinds of circumstances, experience changes from sickness to health that are inexplicable according to materially based expectations.

Putting aside material evidence as a factor in healing involves spiritual growth—being reeducated as to the spiritual facts of being.

Some years after the healing described above, I had an experience that is further proof that we can be lifted out of the darkness of dependence on material evidence into the light of the spiritual understanding of ourselves as beloved and protected children of God. My husband, my young son, and I were on a long-anticipated trip to a large city that we planned to explore extensively. We arrived in the morning and had fun all day walking around the city. By that night, however, the new shoes I had purchased had rubbed one of my little toes raw. I bandaged the toe so that I could comfortably wear the shoes. But by the end of the next day, my toe was so painful that I could not even help with the driving on the way home.

When I got ready for bed that night, I noticed symptoms of blood poisoning on my foot. But I was so deeply inspired by what I was learning about God and about my nature as His image and likeness that I truly was not concerned. I was not focused on physical evidence. In the morning, my foot was perfectly normal. All the symptoms of the night before had completely disappeared.

Mrs. Eddy explains in Science and Health with Key to the Scriptures: “In proportion as matter loses to human sense all entity as man, in that proportion does man become its master. He enters into a diviner sense of the facts, and comprehends the theology of Jesus as demonstrated in healing the sick, raising the dead, and walking over the wave. All these deeds manifested Jesus’ control over the belief that matter is substance, that it can be the arbiter of life or the constructor of any form of existence” (p. 369).

Evidence from the five physical senses can never change or destroy what God has created. As we work to eliminate trust in material evidence, we see this fact more clearly and bring into our experience our God-established, God-maintained health and harmony. 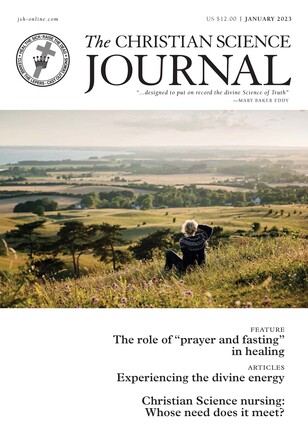 The role of “prayer and fasting” in healing

By The Office of the Committee on Publication | January 2023

Turning to God meets all needs

Reverse the fable, reestablish the facts

Safe in this house

Christian Science nursing: Whose need does it meet?

Nothing can be lost in Mind

Time no obstacle to healing