THERE ARE SYMBOLS ... AND THEN THERE'S THE REAL THING. A logo or slogan may be the international symbol for a certain kind of soft drink or car, but it's not about to quench your thirst or transport you from one place to another. A flag may represent the country you're from, but it can't begin to express the language, culture and beauty of your homeland. And a wedding ring may symbolize marriage, but it only hints at the commitment and enduring affection a couple may feel for each other.

It's a lot like that with symbols for Christian sacrament. Over the centuries a whole tradition of these symbols has grown up, but the "real thing" of sacrament is far beyond anything a visible sign or ritual could ever communicate. True Christian sacrament is life-changing, world-transforming, revolutionary. It's about our oneness with God. Our ongoing, ever-flowing communion with Deity. Our intimate, unbreakable, one-on-One connection with the divine Father-Mother.

In the ancient world, sacrament was an oath of allegiance to a military leader. But it was Christ Jesus who most fully lived sacrament, as a covenant with God—and best helped the world understand what communion, or oneness, with God is about. "I and my Father are one," John 10:30. he explained. And when people wanted to stone him for saying that, he offered up his "works"—his dramatic, unprecedented record of healing sin, sickness, and even death—as proof of his oneness with God. "If I do not the works of my Father, believe me not," he said. "But if I do, though ye believe not me, believe the works: that ye may know, and believe, that the Father is in me, and I in him." John 10:37,

Yet for Jesus it wasn't enough that just he should live a life of oneness with God. He prayed intensely that his followers throughout all time should be part of that Christly oneness—"that they all may be one; as thou, Father, art in me, and I in thee, that they also may be one in us." John 17:21. To consecrate this oneness, he gathered his closest disciples around him in the final hours before his crucifixion, entreating them to unite with the "body" and the "blood" of his healing and saving life-mission. And as a symbol of their new commitment to this Christ-mission, he invited them to break bread and drink wine with him.

Sadly, as the centuries passed after Jesus' crucifixion and resurrection, and especially as his followers' early commitment to Jesus' mission of spiritual healing waned, in many cases, the form of sacrament increasingly eclipsed its substance in the Christian Church. Lukewarm, routinized worship patterns replaced the original Pentecostal fervor. John of Patmos bluntly criticized this lackluster approach and told the Christians at Ephesus, "Thou has left thy first love." Rev. 2:4.

So the concept of sacrament gradually became institutionalized, with ceremonies, rites and rituals often taking the lead. The simple sacramental moment Jesus had shared with his disciples somehow multiplied into a spectrum of seven sacraments—baptism, confirmation, the Eucharist, penance, extreme unction, holy orders, and matrimony. Each of these was administered by an intermediary, a member of the clergy. And communion, or the Eucharist, was often reduced to the act of eating bread and drinking wine blessed by a Church official.

Tragically, the idea of direct communion between the believer and God seemed almost lost.

A return to original Christian sacrament

One of the most radical aspects of the theology Mary Baker Eddy revealed in her book Science and Health with Key to the Scriptures was a return to the simple purity of the original sacrament Jesus gave to Christianity. "Our Eucharist is spiritual communion with the one God," the book explained. Science and Health, p. 35. No intermediaries. No clergy. No material symbols. Only a grateful, receptive heart humbly communing directly with the Father and Mother of the universe. And this natural interchange between Creator and creation is entirely spiritual, based on man's oneness with God. Material symbols can actually work against true communion, threatening its very integrity. "The true sense is spiritually lost, if the sacrament is confined to the use of bread and wine," Science and Health boldly stated. Ibid., p. 32.

It's not surprising that the Church Mary Baker Eddy founded in 1879 reflects this radically new-old concept of sacrament. Mrs. Eddy's Church Manual calls for a wonderfully fresh type of Communion service—a deeply meaningful and spiritualized form of congregational worship. There are none of the traditional material symbols or rites. The centerpiece of the service is a twice-yearly Bible Lesson on "Sacrament," including passages from Science and Health on the subject.

The innovation of communal silent prayer

For many attendees, the highlight of the Christian Science Communion service is something unprecedented in the history of Christian sacrament: totally silent Communion! After the Bible Lesson is read, the Church Manual explains, "The First Reader briefly invites the congregation to kneel in silent Communion." What follows is a poignant and profound Christian experience. Each individual wordlessly, humbly—on bended knee—communes directly with God, in his or her own way. Then, still kneeling, the congregation unites in repeating aloud the Lord's Prayer. Church Manual, pp. 125–126.

And what exactly was the purpose of this silent prayer in the new Communion service? This explanation, published in the August 1889 Christian Science Journal, hints at Mrs. Eddy's grand expectations for this deeply personal period of individual communion with God. "The sacrament shall be observed ... by a short interval of solemn and silent self-examination by each member, as to his or her fitness to be called a follower of Christ, Truth; as to his real state of love toward man, and fellowship and communion with Christ; as to whether he is gaining in the understanding and demonstration of Truth and Love, coming out from the world and being separated from error; growing less selfish, more charitable and spiritual, yea, walking worthy [of] his high calling. It shall be observed by silent prayer after the manner that casts out error and heals the sick, and by sacred resolutions to partake of the bread that cometh down from heaven, and to drink of his cup of sorrows and earthly persecutions, patiently for Christ's sake (Truth's sake), knowing that if we suffer for righteousness, we are blessed of our Father." Christian Science Journal, August 1889, p. 259.

Taking up the cross/wearing the crown

No one could read Mary Baker Eddy's chapter "Atonement and Eucharist" without coming face-to-face with the fact that self-examination and regeneration are at the heart of the sacramental experience. Simply going through the motions of Communion doesn't purify the heart or bring inner transformation. "Christians must take up arms against error at home and abroad," Mrs. Eddy wrote. "They must grapple with sin in themselves and in others, and continue this warfare until they have finished their course." Science and Health, p. 29. Only then can they be renewed in the likeness of the divine. Only then can they make a fresh spiritual start every moment with their hand in God's. Only then can they participate in the Master's life mission. Only then can they expect to be effective Christian healers.

The path of self-transformation and spiritualization of thought won't necessarily be an easy one to follow, the chapter goes on to say. Christians today will, like Jesus, need to drink the cup of self-sacrifice and even persecution. They'll need to shoulder the cross "daily," as the Master did, not just on Communion Sunday.

But the rewards will be life-renovating, both to themselves and to the world around them. Christians will begin to see everything in the "new light" of the morning meal Jesus shared with his disciples after his resurrection. Ibid., p. 35. They'll be on fire to "preach the gospel," to share the truth that's been imparted to them, to move others to spiritual rebirth. They'll wear the crown of true healers. They'll be part of something grander, more majestic, than the human mind could ever conceive—bringing in the millennium!

This is the "Millennial glory" Mary Baker Eddy knew would come once humanity exchanged symbols for the reality of sacrament. "If all who seek his commemoration through material symbols will take up the cross, heal the sick, cast out evils, and preach Christ, or Truth, to the poor,—the receptive thought,—they will bring in the millennium," she wrote. Ibid., p. 34.

Inevitably, the carnal mind resists our natural, health-giving impulse to commune with God. It tempts us to materialize, to intellectualize, to traditionalize, and to complicate the simple beauty of our oneness with Deity. This happened at the beginning of the 20th century, when a creeping body of traditions started to build up around the Communion services in the new Mother Church edifices. Members traveled great distances, by the thousands, to celebrate an annual "Communion season" there. Finally, in 1908, Mrs. Eddy called a halt. See Church Manual, p. 61. She wrote the membership to explain the abolition of Communion services in the Mother Church (though these services could still take place in branch churches throughout the world). And she implored Christian Scientists to reach for a more purely spiritual and exalting form of communion with their God.

"Take courage," she wrote. "God is leading you onward and upward. Relinquishing a material form of communion advances it spiritually. The material form is a 'Suffer it to be so now,' and is abandoned so soon as God's Way-shower, Christ, points the advanced step. This instructs us how to be abased and how to abound." The First Church of Christ, Scientist, and Miscellany, p. 140.

And that's the revolutionary bottom line about sacrament. It takes courage to worship simply and from the heart. To abandon the outward symbols and formulas that keep us from entering into full fellowship with Christ. It takes courage to act on our oneness with God, moment by moment. But if we do this, we'll never be the same again. Nor will our world.

Mary Trammell is a member of the Christian Science Board of Directors. 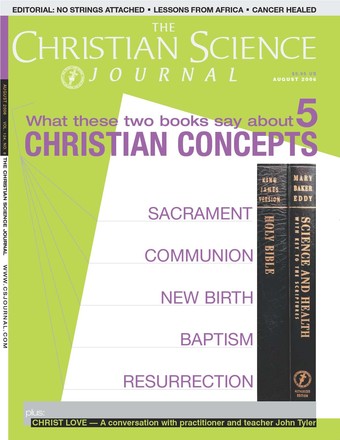 Building (more than) a church

PRAYER IN THE FACE OF DISASTER