GROWING UP WASN'T ALWAYS STRAIGHTFORWARD. I'd been ill for several years through my late teens and early twenties—first with a toxic parasitical illness, and then with clinical depression. I was left debilitated and somewhat emaciated. (I would be diagnosed later as suffering from malnutrition.) Added to this, my doctor then prescribed tranquilizers. After a fortnight of these, I was walking along a corridor when it suddenly felt as though I had been mentally mugged, as though "the lights had gone out." Thus began a long and dark journey, trying to find a way out, to find health and some sort of normality.

Because I was no longer functioning at university in France, I called a favorite aunt, who lived in Wales. She literally took me in off the street—I went there and stayed for the next two years or so. Neither she nor her husband, a medical doctor, were self-pronounced Christians. In fact, he was agnostic. But what Christly compassion! They nursed and cared for me over several years, while I received specialized medical treatment. I don't think I would have made it without this tender and constant succor. There were long periods when it was a day-to-day battle just to hold on. Even the simplest tasks, like taking a short bus ride, were a major challenge. A popular Moody Blues lyric at the time said, "I'm looking for a miracle in my life." Well, I was really looking for one.

As it turned out, that miracle came in the form of my father. Daddy and I had always shared an exceptionally close relationship. He had many fine qualities: a strong intellect, integrity, humor, love of humanity and nature, a spontaneous spiritual sense. We would often seek refuge in a local pub from the sometimes difficult times at home. I didn't like to add to his burdens, but after years of suffering, I admitted to him that I didn't know what else to do. That's when he said, "If medicine can't heal you, Christian Science will!"

I was stunned. I'd never heard the words Christian Science. As a family, we'd been strong supporters of the Church of England, where I'd been head chorister and later confirmed. But as my father recounted, back in the 1920s, his sister had been healed of a diagnosed brain tumor through Christian Science treatment. This experience had made a deep impression on my dad as a young man.

About 30 years later, my father was diagnosed with carcinoma of the lung. He said he was so frightened that his hair stood on end! But in this dark moment, he recalled Christian Science and the wonderful healing of his sister. He called a Christian Science practitioner, who agreed to pray for him.

During the next two weeks, my father read the whole of the Bible, the whole of Science and Health, and, as he recalled to me, the New Testament in French because he liked its "spiritual sense." Toward the end of the two weeks he was given a bronchoscopy—an internal examination of the lung with a small camera to pinpoint the exact point of the operation. The following morning, Daddy was sitting up in a bed when the doctor came in and explained that the bronchoscopy revealed that nothing was wrong with my father's lung. My dad wasn't surprised. He had been convinced—spiritually convinced—that he was healed, that all was well. And it was. He was discharged from hospital and continued with a full life for a couple more decades.

If anyone else had told me to try Christian Science, I would probably have dismissed it. But I knew that my father was both deeply honest and intelligent and that he would not offer me anything that wasn't genuine or sound. I trusted him about it.

We began by attending a few Sunday church services together. The metaphysical concepts discussed at these services were very strange and new to me, and it was tough to concentrate because I was feeling so ill. But I needed so much to be healed and was really reaching out for help. Then, at about the third service, I heard these words of the Apostle Paul: "For in him we live, and move, and have our being." Acts 17:28. That idea—that my life was wholly spiritual, and not at all material—just burst through the mental clouds. I had this glimpse—a revelation—of spiritual reality and the complete freedom it includes. It felt as though chains had fallen from me. This moment of spiritual insight showed to me that I was on the right path—that Christian Science reveals the truth and that I could find healing through it.

I began to have the help of a Christian Science practitioner and tried to read Science and Health, although the symptoms of the illness made it almost impossible to concentrate. But I was really reaching out with my heart. Then, one night, after praying persistently with the Lord's Prayer, I had a wonderful spiritual illumination, with a feeling of God's doves tenderly ministering and softly surrounding me. It was like the passage in Matthew where Jesus "saw the Spirit of God descending like a dove, and lighting upon him: And lo a voice from heaven, saying, This is my beloved Son, in whom I am well pleased." Matt. 3:16, 17. I saw myself the way I truly was, the way God made me—spiritual, whole, completely harmonious. And at that moment, all of the physical symptoms ceased.

I went up to my bedroom and reached up for an old family Bible lying unused on a top shelf. Now, with this wonderful spiritual influx, it seemed as if it were on fire. It's difficult to put into words what I felt at that moment, but I realized that the power and presence of God could be experienced and palpably felt in this age. It was awesome. I wanted to shout the news of what I'd found to everyone. And, despite the years of struggle, I believed God really was leading me to healing and to a true understanding of Him.

However, after a while the symptoms of the illness returned, and I was very discouraged. I discontinued the practitioner's support and reverted to medical treatment. During this time I was prescribed a further combination of antidepressants, tranquilizers, steroids, and sleeping tablets, among other things. But this was not without risks. Some of the side effects were severe—frightening hallucinations, palpitations, strict dietary restrictions, and so on. There were periods of improvement, followed by crushing relapses. Meanwhile my friends and peers were busy graduating, getting good jobs, and progressing with their lives.

While I was struggling in a silent valley of hopelessness one Christmas, my father sensed my need and quietly uttered these angellike words: "I'm sure you will receive the gift of Christmas healing." It was such a simple message, such an inspired moment of reassurance—one of those moments that deeply speaks to you and stays with you. It comforted and promised me that despite the years of suffering and setbacks, I would and could eventually find freedom and healing. That this was the real spiritual gift of Christmas: healing. And it could be experienced today.

At last, I discontinued with the medical treatment and called on a practitioner and teacher of Christian Science. There were inspiring and comforting meetings with this wonderful man and much diligent prayer—and as much study as was possible. After about three weeks of this joint conscientious and prayerful dedication, I came across these words of Christ Jesus: "Ye shall know the truth, and the truth shall make you free." John 8:32. I saw the spiritual reality behind the words, that they were true and demonstrable law today and now. That, contrary to the world's perspective of man as vulnerable and sick, I was actually spiritual, whole, harmonious—perfect. And that as Jesus had promised, persistently and faithfully acknowledging this truth would bring a hitherto-unknown freedom. This is what the practitioner and I had been doing. And now, with tears of joy, I realized that I didn't have to wait for freedom, but that it was mine already. I was free.

This included freedom from all of the physical and mental symptoms of the illness. After having taken somewhere near 10,000 tablets over eight years, I never took another one.

Other areas in my life also began to improve. I had been at the point of being fired from a job—now it turned around, and I started to become successful. I used to smoke 20-plus cigarettes a day. I was healed. I drank, and the job seemed to demand social drinking—particularly at lunch times. Gradually I found the courage to excuse myself from these activities.

I was also progressively freed from the desire to drink. I didn't want my spiritual sense of freedom dulled—so I stopped. I was careful not to judge my colleagues and also to know that God would not penalize me for taking this stand. It was just natural to stop. I never had another alcoholic drink.

There were other physical healings, too. One time, I was due to attend the wedding of a close friend and I started feeling the aggressive symptoms of laryngitis. But I refused to admit that this condition could be a part of me as the image and likeness of God, and I prayed persistently the whole day with the Lord's Prayer together with its spiritual interpretation by Mary Baker Eddy. The condition was healed overnight.

Christian Science became a way of living and thinking, touching and redeeming every facet of my life.

These healings and the physical freedom that have come as a result of my study of Christian Science are, of course, huge. But much more significant for me was the spiritual regeneration that accompanied them. It became a way of living and thinking, touching and redeeming every facet of my life. Through Science and Health, the Bible has become alive, practical, and relevant. Christian Science changed my life around completely and offered a new way of thinking and living—full of promise, redemption, and healing.

I still think with awe about this wonderful Christmas gift given to us now, today—Christ, Truth. The gift of healing.

Jeremy Batchelor manages an international food ingredients business. He lives in Oxted, Surrey, England, with his wife, Christine, and their four children—Emma, Debbie, Daniel, and Harriet. 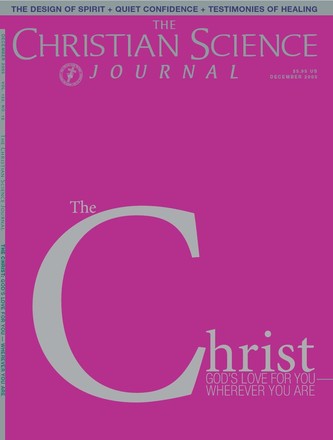 Humility fit for a king

THE DESIGN OF SPIRIT

CHRISTMAS BLOOMS IN THE DESERT

THE GIFT OF CHRISTMAS HEALING

Prayer on the go

The power of selfless prayer

A science and its proof

A NEW LIFE IN CHRIST