One spring, I began to suffer allergy symptoms. A painful earache set in one night, and I sought the help of a Christian Science practitioner—one who provides specific prayer for healing. By morning the pain was gone, never to return, and by that evening the ear drained. But the next day my hearing in that ear was impaired, and there were still aggressive symptoms of coughing and congestion.

Even before facing these challenges, I’d heard widespread predictions of suffering as spring had set in, and I had been guarding my thought—affirming that in God’s perfect, spiritual creation (which includes each of us), the newness of life being expressed could not result in any discord. I continued praying with this idea, and within a couple of days I was able to resume my normal activities at work. However, I was left with a clogged sense of hearing affecting both ears, which after more than a week of continued prayer was not yielding.

I know from my study and practice of Christian Science that it is a proven Science that changes one’s own thinking to yield to the unchanging reality of what God, divine Truth, knows. I saw that what was required of me was a greater willingness to listen to and be obedient to the divine Mind that always answers every prayer, communicating the truth that our true identity is forever held in perfect health as a whole spiritual idea, embraced in divine Life. The picture of me as a suffering, non-functioning mortal was only a lie—a suppositional belief that I could be separated from God. And I knew the light of divine Love must dispel this darkness.

My prayers needed to go deeper than just acknowledging that one’s true senses are spiritual and not subject to impairment or discord; the Christ, Truth, was speaking to my consciousness, revealing to me the truth I needed to hear and know to bring healing. Science and Health with Key to the Scriptures by Mary Baker Eddy, a book that is solidly based on the Bible and especially the life and healing works of Christ Jesus, says, “The effects of Christian Science are not so much seen as felt. It is the ‘still, small voice’ of Truth uttering itself. We are either turning away from this utterance, or we are listening to it and going up higher” (p. 323).

As I listened, I was led to address a sense of frustration I have felt over many years when I have had the opportunity to share Christian Science with others. I have come to love Christian Science for the freedom from illness and suffering it has brought me and my family; such freedom is a natural result of devotion to the practice and study of this divine Science that was revealed by God to Mrs. Eddy for all humanity. Yet I have often felt, after sharing Christian Science with others, that my efforts fell on deaf ears. Even Christ Jesus said: “For this people’s heart is waxed gross, and their ears are dull of hearing, and their eyes they have closed; lest at any time they should see with their eyes, and hear with their ears, and should understand with their heart, and should be converted, and I should heal them” (Matthew 13:15).

I began to realize that self-righteousness stemming from the conviction that I was in the right and others were in the wrong was severely hindering my efforts. I also saw that by letting the righteousness of God, infinite Love, replace that sense of self-righteousness, healing would result in more than one aspect of my life. I realized that in spiritual reality all are only capable of hearing and knowing the voice of Truth. God could never know or create a deaf ear, because all true sense is found in divine Soul alone.

As these revelations took hold of my thought, the hearing impairment dissipated completely in about a day. There has been no recurrence of this issue since.

Soon after this healing, an opportunity opened up for a heartfelt discussion about Christian Science with a longtime Christian friend. It was a lovely conversation that ended with a sincere request for a copy of Science and Health.

I am very grateful for the growth in humility this healing has brought to me, but even more so for the increased trust in God as the one eternally heard and understood, omnipresent, saving voice of Truth that all of God’s children reflect. 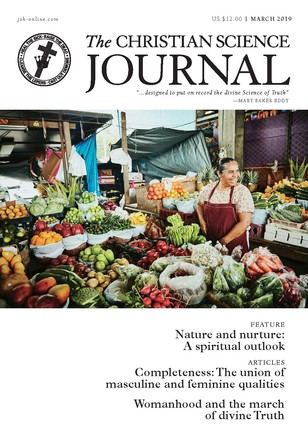 Nature and nurture: A spiritual outlook

Completeness: The union of masculine and feminine qualities

Children Can Heal Others

Thank you, Mary Baker Eddy, for this magazine

Womanhood and the march of divine Truth

Waking from the dream of life as mortal

A youth’s prayers, and a grandfather’s healing