One thing that sets Christian Science churches apart from most other churches is the weekly testimony meeting on Wednesday nights. The past two years I’ve come to appreciate these gatherings as mid-week refreshments. My favorite part, when the congregation is invited to give testimonies of healing, comes after the second hymn. Anyone can share their experience, whether they’re a long-time member of the church, a newcomer, or a small child.

A few months ago, I mentioned to a friend all the fantastic healings I’d heard at testimony meetings. I realized that many of the people who’d given them had never had the chance to share them beyond our community church. These people had relied on God during the most trying times of their lives and had incredible results. But their healings had never been documented. So I conducted an interview with one of these individuals—my grandmother, Shirley Gage, of Santa Barbara, California, who had a remarkable healing that changed her life, and mine. To me, it’s a powerful demonstration of what happens when we steadfastly rely on God.

Grandma, tell me about your healing.

One night several years ago, I lost consciousness and fell into a set of louvered doors, hitting my head on the marble floor. When I regained consciousness, I was cut, bruised, and unable to sit up. So I crawled back to bed, where Grandpa was sleeping. The slightest movement, even a sneeze, brought an agonizing pain, so overwhelming that it was hard to think or pray.

We called a Christian Science practitioner in another state, who lovingly agreed to pray for me right away. A passage in Science and Health that the practitioner and I worked with was this: “When the illusion of sickness or sin tempts you, cling steadfastly to God and His idea. Allow nothing but His likeness to abide in your thought. Let neither fear nor doubt overshadow your clear sense and calm trust, that the recognition of life harmonious—as Life eternally is—can destroy any painful sense of, or belief in, that which Life is not” (p. 495).

The family was so supportive and helpful in caring for me during this time. But when it became obvious that I needed more care than they could manage, I called a Christian Science nurse, who came quickly. She was loving, calm, and confident of healing. She realized that I was intimidated by the pain and encouraged me in my work with the Christian Science practitioner to “face it down.” In other words, to resist the devilish suggestion that I could be a victim of accident or separate from God, good, even for a second. With her help, and later the assistance of two other Christian Science nurses—who came to my home every day for about two weeks to help me with daily cleanliness and meal preparation, and to provide spiritual uplift—I made progress. Soon I was able to walk, leaning on the arm of the Christian Science nurse, although any twisting body position still caused pain.

What sustained me through this time of physical challenge was affirming that God’s law is the only law. God creates, maintains, and sustains His perfect creation, and His law of good governs us. I saw that my only job was to be obedient to this law. I pledged to do this by loving God with all my heart, soul, and mind—Jesus’ first and great commandment—and to love each of God’s children (see Matt. 22:35–39).

At one point, the situation was compounded by another problem. At unexpected moments, the slightest movement of my head would cause my world to turn upside down, and it felt as if I were floating in space like an astronaut. I felt disoriented, discouraged, and that this was too much to contend with. I felt like I was passing on. I felt like giving up.

At this point, a concerned family member suggested I go to the hospital for X-rays, a diagnosis, and possibly surgery. My first reaction was “Why would I do that? I’m getting the best care in the world—metaphysical treatment from a Christian Science practitioner, the practical care of Christian Science nurses, and the support of a  wonderful husband, all of whom are relying on God. Why would I settle for less and open a Pandora’s box of opinions by getting a diagnosis?” But then I thought, “Maybe I’m being too selfish; maybe this is too hard on the family. Am I being too stubborn, too rigid?”

In this valley of indecision, I fell asleep. When I woke up, I heard a clear, angel message: “Stay with God, and win.” I recognized the message from a hymn in the Christian Science Hymnal: “Rouse ye, rouse ye, face the foe, / Rise to conquer death and sin; / On with Christ to victory go, / O side with God, and win!” (Maria Louise Baum, No. 296). I laughed because it reminded me of the advice my tennis coach gave: “While some people get angry and throw their rackets down, just laugh instead and win.” That laughter broke the mesmerism of indecision.

The next time I felt as though I were floating in space like an astronaut, it occurred to me that the astronaut is tied to the mother ship; he or she is not a helpless mortal, lost in space. Likewise, I wasn’t a mortal lost in fear and separated from God by what seemed to be overwhelming problems. I had an unbreakable spiritual link to my Father-Mother, God, and I was secure and safe in this knowledge. Mary Baker Eddy wrote, “It is only by acknowledging the supremacy of Spirit, which annuls the claims of matter, that mortals can lay off mortality and find the indissoluble spiritual link which establishes man forever in the divine likeness, inseparable from his creator” (Science and Health, p. 491).

I knew that as the likeness of God I was already perfect, so I wasn’t trying to change a painful body into a painless body, or waiting for time to heal. That would be like waiting for God to get better, stronger, and more perfect. I claimed over and over that I was established in Christ, Truth. I could not be shaken or impressed by false evidence, such as pain, coming from the five physical senses.

Less than a month later, I was able to walk into church unaided to resume my duties on the executive board and as substitute Reader. This healing happened about eight years ago. I have the deepest gratitude to God, and am so grateful for the steadfast, uplifting support from the Christian Science practitioner and the Christian Science nurses.

Were you ever scared during this time?

I was afraid of the pain. Even though I thought I was passing on, I wasn’t afraid of death. Death has never scared me. When I was 18, I did a lot of research in Mrs. Eddy’s writings on the subject of life and death when my Sunday School teacher passed on. So it was really clear to me that life goes on. However, death is not a friend. It is not an escape, and it’s not an advantage. It’s an enemy that you fight and resist as you would any enemy.

You said at one point, though, you felt like giving up.

What is a key point that you learned from this healing?

Follow Mary Baker Eddy’s rules right away: Don’t let a false image grow in your thought of yourself as injured, or incapacitated for life, or for a long time. Don’t let that image stay in thought or grow. It’s not real. Don’t believe it. Resist. As Science and Health says, “Resist evil—error of every sort—and it will flee from you” (p. 406). “Take possession of your body, and govern its feeling and action. Rise in the strength of Spirit to resist all that is unlike good. God has made man capable of this, and nothing can vitiate the ability and power divinely bestowed on man” (ibid., p. 393). The gift of dominion was bestowed on man, it says in Genesis 1. We don’t have to earn it; it’s a gift. But we need to exercise it. Be quick in rejecting the lie of life in matter and go straight to the arms of divine Love. Embrace that Love and its support because there is nothing else. In short, I learned to resist aggressive suggestions, insist on Truth, and persist—never give up!

How have you incorporated what you’ve learned into your daily life?

What advice would you give to youth of today? 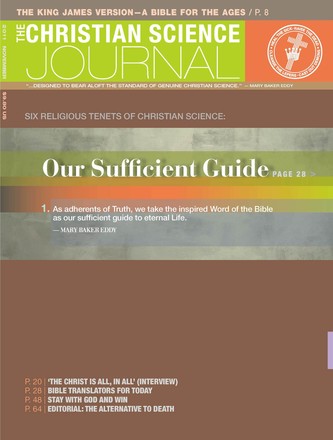