Christ Jesus said to his disciples (John 16:12), "I have yet many things to say unto you, but ye cannot bear them now." By this statement, he implied that he himself was able to grasp and utilize many things far in advance of his disciples' present capabilities. Jesus foresaw and foreused truths of which the disciples must wait the unfoldment in their conscious experience. Jesus was reassuring, however. He claimed no monopoly of the power and understanding of eternal truth. He said to the disciples (verse 13), "Howbeit when he, the Spirit of truth, is come, he will guide you into all truth."

Jesus as the individual demonstrator of the healing and saving Christ was able to foresee the coming of the final revelation of Truth, and therefore he was able to predict that then the sole remaining need would be individual response to guidance by the "Spirit of truth."

So in the fulfillment of that prophecy came the individual pure and unselfed enough to receive and record that revelation. Always it is the individual who receives and utilizes and bestows. And we now have in "Science and Health with Key to the Scriptures" by Mary Baker Eddy the final revelation of Truth.

All those things that Christ Jesus said his disciples could not then bear are in Christian Science, as revealed in Science and Health, and they need only to be practiced. The solemn import of Jesus' prophecy is that even as Jesus was able to bear these truths, so must each of us, his present-day disciples, bear them in the day of their revelation to individual human consciousness.

Solemn is the question each must ask himself, "Am I able to bear these things of Spirit now?" In facing up to this question, one must consider that he can bear whatever he can receive in the understanding, for ability and capacity must ever keep pace. Whatever one can know, he can bear witness to. What he must meet is his individual responsibility to reflect Truth in his own life. He can bear whatever he reads aright in Science and Health, for no statement therein departs in the slightest from the basic truth as revealed and laid down therein.

Science and Health concedes nothing to error. It makes no compromise with matter or material medicine. It permits only that which conforms to the final revelation of Truth, to "pure religion and undefiled before God and the Father" (James 1:27).

Truth's guidance is always away from matter, for it is the leading of Spirit. And because man is individual, it is of necessity the individual's age that is subject to advancement. Human nature, left to itself, would not have changed in all the ages. True progress has come only as human consciousness has been enlightened by the individual's recognition of the presence of that divine influence which heals and saves. This means both the present availability of salvation and the individual's complete independence of any deferment of his advancement.

Humanity in general cannot hinder, or prevent, or defer individual progress "into all truth." Jesus could not have brought Christ in completeness to the world had he waited or been compelled to wait until the humanity of his time was able to bear the complete Christ he manifested. All progress is individual. It waits not on tides of human thought, but always floods the receptive human consciousness.

One advances his demonstration not by seeking to conform Science and Health to his concepts and desires, but by making his conclusions and conduct conform to the consistency of the final revelation of Truth.

Since, then, each individual is never limited by other than his own opinions, and since he is in fact saved by his own convictions, that is, through the Christliness of his own thoughts, may we not profitably consider the advancing age in terms of one's own unfolding thought and its progressive effect upon one's life? That is the true perspective of human life, for the world does not advance the individual's thought and life, but rather the individual's thought and life, if progressive, advance the world.

Right desire, plus effort, results in answered prayer bringing in knowledge of God, hence of man. This individual forward motion of thought constitutes the advancing age. This advancement of the individual is achieved through higher conceptions, uncontaminated and unhampered by the conventions and traditions of a period outmoded and outgrown.

The advancing age is then a very personal matter with the individual. It must be one's own advancing age which admits the efficacy and supremacy of Mind, Spirit, and sets the standard and maintains the stability of one's practice.

Age is not, in truth, a compilation of time but of unfoldment, development. The advancing age is the age of receptivity and initiative. It recognizes the efficacy of Christian Science and is quick to avail itself of its practice in daily living.

Mrs. Eddy saw that the individual could not afford to wait for others to become receptive, enlightened, and progressive. In a sermon entitled "Christian Healing," she writes (p. 1), "We have asked, in our selfishness, to wait until the age advanced to a more practical and spiritual religion before arguing with the world the great subject of Christian healing; but our answer was, Then there were no cross to take up, and less need of publishing the good news.'"

The advancing age is the individual's new birth, continual regeneration. Evolution out of error is its disappearance plus the appearance of the real and eternal. That appearance is the advancing age, ceaseless and endless. God, who is changeless good in essence, is never the same in aspect. His man is infinitely various. The advancing age assures newness of life to every idea, from the component to complete man. Humanly, then, in the advancing age we have changes, but always for the better. Only such changes are progressive.

The advancing age is the subjugation of the advancing modes of the human mind. Mrs. Eddy's wisdom in elucidating Christian Science becomes more and more apparent as the age advances in physical science. Only Christ can save a world caught between its useful knowledge of atomic energy and the threat of the atom bomb.

Where physical science abounds, Christ must much more abound, else the world would be unable to avoid the tragedy of its own knowledge of itself. All true advancement is incidental to the unfoldment of real Mind, and when real Mind is seen as primary, all secondary effects are in order and wholesome and progressive.

The advancing age offers a clarified medicine, purely spiritual, and not the confusion of the belief in the alleged curative power of matter, which promises healing and fastens itself as an Old Man of the Sea upon one's back. The advancing age offers the pure religion of Christ Jesus, instead of a Babel, which attributes evil to God, matter to Spirit, and pictures a God who condemns His own handiwork.

Flying at great height in a moonlit sky, one could, it would seem, reach out to touch the heavenly orb, so near at hand it appears in the rarefied atmosphere; and every snow-white cloud stands out in boldest relief. Even so we come nearer the golden heart of God as the earth mists thin in the upward swing of thought.

Reality is clearer in the silent reaches of spiritual consciousness, unhampered by the low-lying blanket of mortal mind. The less dense the air, the higher from earth, the clearer is the vision and the more glorious the scene. The effect upon the individual is a buoyancy beyond the drag of any reluctant earth-bound thought. It is a consciousness freed and occupied by the invigorating influx of pure spiritual-mindedness.

In this rarefaction, one disregards earth weights. One gains glimpses of reality and hears the angelic symphonies. The world takes note of the advancing age of the individual, as witness this verse of an observant poet:

"Today I met with one
Who burden bore
No mortal arm could span.
Yet carried he it well,
Walking as if 'twere hand alone
Upon the hip.
Imponderability!" 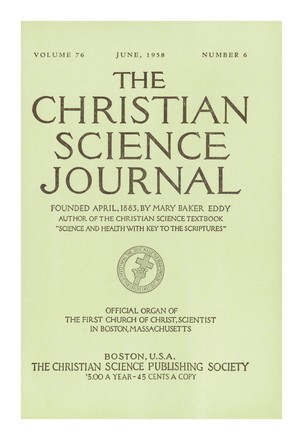 ANNUAL MEETINGS OF THE MOTHER CHURCH

"I AM NOT COME TO DESTROY, BUT TO FULFIL"

"THE WAY OUT OF THE WILDERNESS"

THE EFFECTIVE QUESTION AND ANSWER METHOD