One night, after I had been studying for three or four months, I had a head-on collision while driving home from work. I was thrown through the windshield of my car and traveled about 30 feet in the air, landing in a field. Later, I learned that rescuers who arrived at the scene thought I would not live through the night. I was taken, unconscious, to the hospital and admitted into the intensive care unit, where I was diagnosed with a broken collar bone, leg, and ankle, along with head injuries. Because of the nature of the head injuries and because I was unconscious, I was not given any medication.

The only thing I remember from this entire experience was hearing two words: "God is." I'm not sure where I was when I heard these words, or even if I was the one who was saying them. But at that moment, I felt and understood what I had been reading in Science and Health—that God is Principle, God is Love, God is Soul, God is Truth. And He is all there is.

I regained consciousness several days after I'd been brought to the hospital, and within hours I was released with only a broken arm, which had been placed in a cast. The doctors expressed amazement not only that I had survived, but also that I had no remaining cuts, bruises, or broken bones in my face. When I was told of the diagnosis and all the turmoil surrounding my case, it felt like I was hearing two different versions of the same story, because all I had experienced were those two words, "God is," and the calm, strong feeling of peace that came with them.

After I returned home, I found myself sharing the details that I had been told about the accident, along with the miraculous outcome. My friends repeated the story, and they were pretty good at telling it dramatically, probably a bit more dramatically with each telling. I would show the listener that I had no facial scars—in fact I had no scratches or remaining disfiguration of my face—and, more significantly, no brain damage. (I had the cast removed from my arm after about two weeks, when it became clear that this, too, had been completely healed.) I didn't realize that I was getting caught up in making this event a reality until I was taken to see the remaining wreckage of my car. That's when it dawned on me that in rehearsing what had happened, I was acting as if the event was a reality that Christian Science had overcome.

In the months that followed, it became clear to me that I couldn't play both sides of the coin—I couldn't believe that God is All, the only cause, and at the same time believe that something He hadn't caused had happened. As Mary Baker Eddy wrote, "Accidents are unknown to God, or immortal Mind" (Science and Health, p. 424). That was what I needed to see. Because God is All-in-all, I had to accept without wavering that I had never been outside of His loving care. I had never been involved in a fight for my life, because God is my only Life. I further reasoned that, as God's idea, I could only express what God is. My experience could not include mistakes, accidents, lingering injuries, effects, scars, or limitation.

"God is" was the healing truth that had been with me from the start, and I had seen from the first moment of this healing that I was never a part of any material picture claiming an existence separate from God. Now, I held to this truth again until I became convinced that no accident had ever been a part of my experience as the expression of an all-good God. Through this prayer, I was able to let go of the event completely—to release it like a dream from which I'd awakened.

Today, I am still learning lessons from this healing and all of the healings I've had in Christian Science. This Science is truly one of progress, where stagnation and holding on to the past are never a part of Truth, Love, and Life.

I am also grateful to have seen, as a new student of Christian Science, that even the smallest understanding of Truth carries with it the power of the whole Truth of God's love for His cherished idea.

We invite readers to submit testimonies of Christian Science healing for publication. Please address testimonies to: 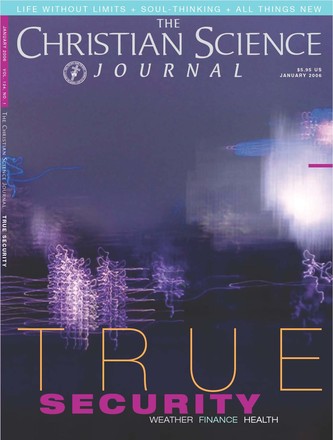 QUESTION: How much can we pray for other people without their request and without interfering with their thought?

A translation from scratch

A message for the world

THE PLEASURE OF HIS COMPANY

Flight of the chickadee