EVEN AN AVERAGE-SIZE ICEBERG is pretty enormous. The largest recorded, located off Antarctica, measured more than 4,200 square miles. What makes an iceberg so impressive, however, is not just its immense visible surface, but the fact that about 90 percent of its total mass is actually under water.

Looking at an iceberg is a bit like grappling to understand the deeper things in life. The small portion that is visible to the eye doesn't even begin to speak for the whole. What appears on the surface is only a fraction of the total substance.

Everyone would like to feel they are perceiving life fully and accurately. But is a deeper awareness of life possible—an awareness that transcends the perception of the superficial? The "surface" of life could be thought of as that which can be perceived through the five physical senses. A deeper perception, therefore, would have to be one that is nonmaterial, one that perceives spiritual substance.

To some, this may sound a bit New Age. But throughout the centuries, this kind of "sensing" has been known by various synonyms: prophecy, insight, even leadership. Regardless of what you call it, spiritual sense is simply the ability to perceive the magnitude, magnificence, and wonder of that which the material senses cannot.

Mary Baker Eddy also described this relation between spiritual substance and its Creator. "Spiritual sense," she wrote, "is a conscious, constant capacity to understand God." Science and Health, p. 209. Mrs. Eddy, who discovered the laws of Spirit that govern the universe, revealed that spiritual substance is the only reality and is always good, because it represents the all-good, divine Spirit. Clearly this indicates that if one were to attempt to better understand God as Spirit, one could avail oneself of that much more spiritual good in life—good that perhaps was not before evident.

Some may feel that spiritual sense is a quality that only belongs to a lucky few. But not according to the Bible: "There is a spirit in man: and the inspiration of the Almighty giveth them understanding." Job 32:8. It's innate in everybody. Just because one may not have recognized or used one's spiritual sense does not mean that it doesn't constitute an integral part of each individual. Like a priceless jewel sitting in a bank vault, spiritual sense simply needs to be taken out of the vault and polished—to be put in practice and exercised.

So how does one go about exercising spiritual sense? Again, the answer can be found in the Bible. In the First Commandment, God told Moses: "Thou shalt have no other gods before me." Ex. 20:3. If the one God is not matter, but Spirit, there is no power other than Spirit. The totality of Spirit eliminates the possibility of any material powers. The conclusion is that nothing can possibly come between the Creator and His innumerable spiritual creations.

Jesus Christ himself lived and identified with this spiritual unity with God. "I can of mine own self do nothing," John 5:30. he explained to a group of cynics. To his disciples, he said, "The words that I speak unto you I speak not of myself: but the Father that dwelleth in me, he doeth the works." John 14:10. In Jesus' own words, it was his oneness with God that allowed him to do the works.

The spiritual sense of Life and its grand pursuits is of itself a bliss, health-giving and joy-inspiring.

Think out from Spirit

But Jesus didn't claim to be the only one to have an unbreakable relationship with God. He knew that all people were united with the same Spirit he was. A New Testament writer said, "Let this mind be in you, which was also in Christ Jesus." Phil. 2:5. The possibilities of meaning for this verse are endless. Mrs. Eddy saw the importance in not trying to limit an infinite God who is Spirit. One gets a sense of this from reading her definition for the word in found in the Glossary of Science and Health: "IN. A term obsolete in Science if used with reference to Spirit, or Deity." Science and Health, p. 588. God's infinitude is too vast to fit inside or be contained by anything! Based on this reasoning, one could read the Bible verse: "Let this Mind be you, which was also Christ Jesus." The spiritual interpretation of this verse shows that cultivating spiritual sense is not simply thinking about Spirit, but thinking as or out from Spirit—seeing the way that God is perceiving Himself and His creation.

A simple analogy illustrates the kind of broken relationship that one may be tempted to think they have with God. A reasoning that does not insist on the unbreakable relationship between God and His children imagines prayer to be a type of ladder. The person praying is at the bottom, struggling to climb up to God, who waits at the top. Spiritual sense, on the other hand, recognizes that there is no ladder. That each individual is already at one with Spirit, looking out from God's vantage point and claiming nothing but His presence and power. This does not imply that a person becomes God, but that the individual coexists with God right where He is. There is no distance separating one from God, because distance is a material concept. Truly knowing the spiritual universe involves not what one thinks about it, but what God knows about it.

It is little wonder that Jesus told Nicodemus that he must "be born again." John 3:7. The word translated "again" in the King James Version means, in the original Greek, "from above." In other words, from Spirit.

But what about those times when it doesn't seem so easy to exercise spiritual sense? What acts as an obstacle? Placing undue importance on the material world, for one thing. Mrs. Eddy once referred to materiality as that which "clogs the progress of students." Miscellaneous Writings 1883-1896, p. 156. The remedy here involves what Jesus implied in his words "seek ye first the kingdom of God, and his righteousness." Matt. 6:33. As the kingdom of Spirit, this kingdom must be entirely spiritual. Effectively, the verse can mean, "Seek the spiritual." And one way to practice this is to see that every material object has a spiritual representation: A house represents home—love, warmth, hospitality. Spiritual qualities that endure. A computer hints at the qualities of order and usefulness. The list is endless, but each material object is a symbol of lasting spiritual qualities. Mrs. Eddy said in Science and Health that this form of reasoning "resolves things into thoughts." Science and Health, p. 269.

And what was Jesus' promise to those who sought the kingdom of God—the spiritual sense of things—before all else? "All these things shall be added unto you." Matt. 6:33. This indicates that the needed material things do come, but only after one has sought the spiritual kingdom.

The shifting of thought from a material to a spiritual basis could be illustrated by the following apocryphal story. A man in great financial need approached the foreman on a building site for work. "OK," said the foreman, "I'll give you some work. Go and roll that boulder up and down that hill." "No," replied the man, "What I need is money." "OK," said the foreman, "here is some money, but you can't spend it." "No, that's no use either," said the man. "What I need is food and warm clothes for my family and fuel for the fire." "All right," said the foreman, "here are all those things, but you can't use them." Finally, the man said in despair, "No, you don't understand. What I really need is warmth, nourishment, love, and abundant supply." In other words, what the man truly needed was the qualities that those things represented.

This spiritualized state of reasoning is not simply an attitude; it could be called an "altitude," in which one's consciousness is lifted to the recognition of Spirit that brings unassailable dominion. It reveals that man is not at the beck and call of matter, is not governed by it, chasing after it, or even being chased by it.

In what areas of life does this work? If one is experiencing financial difficulties, the recognition of Spirit's ever-present substance can bring abundance pouring into life, just as it did for Jesus when he was confronted with more than 5,000 mouths to feed and a miniscule supply of food. See Matt. 14:14-21 . To meet the need, he looked to heaven, to the realm of Spirit, and gave thanks—no doubt acknowledging the spiritual substance that was already there. The result? This recognition of Spirit yielded food for everyone.

Suppose that one is suffering from grief. Acknowledging that the qualities of God the individual expressed can never be expunged from Life, that one can never be separated from God, Spirit, because Spirit is ever-present and allows no separation, brings the gentle touch of comfort and peace. Love, companionship, and tenderness are not outside oneself to be lost, but already included in one's being as part of each individual's oneness with Spirit.

Perhaps a mother, with all the responsibilities of running a home and holding down a job, is desperately wondering how to meet the demands. A spiritual perspective on those demands would bring a calm sense of control and fulfillment. Knowing that Spirit is constantly sensing spiritual creation completely and perfectly enables one to make a mental shift from asking God what to do to knowing that there is truly nothing spiritual that hasn't already been done. Where just a moment ago there had been tension and pressure, there would now be assurance and ability.

It's not always easy to keep up this altitude of thought. Persistence is necessary. From the very moment you open your eyes in the morning, you can claim your oneness with Spirit and keep on doing it throughout the day. This will begin to annul the feeling that the material world has power and can make a victim of you. Nothing can truly influence, attract, impel, or undermine you when you think from the basis of Spirit.

The cultivation of spiritual sense is an immensely rewarding daily and hourly exercise. It's an ongoing process, not a one-off wonder. It means checking each thought as it comes and asking, Is this thought coming from Spirit? Is this what God is saying right now? In this way, one can recognize and discern Spirit, and know that each person looks out on creation with God and beholds His spiritual universe. This is spiritual sense.

Jill Gooding is a teacher and practitioner of Christian Science, living in East Molesey, Surrey, England. 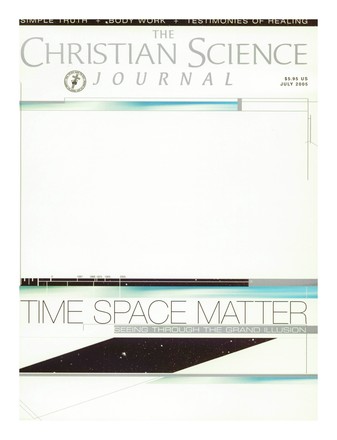 Letter to a friend

THE POWER OF SPIRITUAL SENSE

A CHANGE OF HEART

SEEING THROUGH THE GRAND ILLUSION