SOME YEARS AGO, I visited a young mother and her new baby. I asked her what she was finding most different with this change in her life. Very softly, she said: "I never thought I could love anyone so much!" I remember thinking: "And that will never change."

Of course, babies grow into toddlers, toddlers grow into teenagers, teenagers grow into adults, and, while mother/father love doesn't change, our children do. Inevitably the demands on parents change—corresponding to the needs of growing children. Even when my own children left home, I found that my parenting continued, albeit differently from their baby days. Confronting the challenges of life in the "real world," my kids often checked in with my husband and me for comfort, ideas, love. No matter how old they get, we are still their parents.

The Bible and Mary Baker Eddy's book Science and Health supported me in learning how to play this role. When one of my children was in trouble, I got some clues from the father Jesus described in his parable of the prodigal son. The son had taken off with all the money his father had given him and had taken up a less than admirable lifestyle. The parable doesn't tell us whether or not the father knew that his son had been leading an "undisciplined and dissipated" life, but it does tell us how he felt when his son returned home: "When he was still a long way off, his father saw him. His heart pounding, he ran out, embraced him, and kissed him." He immediately planned a "wonderful time" to celebrate his son's return.  See Luke 15:11-32 (Scripture taken from The Message. Copyright © by Eugene H. Peterson, 1993, 1994, 1995. Used by permission of NavPress Publishing Group).

It seemed to me that the father's parenting role continued even when he was parted from his son. My take on this parable was that the father firmly held to a spiritual view of his son. I thought, instead of wringing his hands, mentally condemning his child, readying a lecture to straighten him out upon his return, the father's approach was maternal—a pure love that kept on flowing no matter what. I liked the idea that he must have constantly cherished his son's actual innocence and purity—just like that of the babe he loved at birth.

Science and Health describes that approach perfectly: "A mother's affection cannot be weaned from her child, because the mother-love includes purity and constancy, both of which are immortal. Therefore maternal affection lives on under whatever difficulties."  Science and Health, p. 60. The father in the parable poured out maternal love and affection in spite of his son's disappointing decisions.

Activist Pete Seeger was once asked for his advice on parenting. He said: "Pour in the love and it will come out from them!"  Huston Smith, "Reasons for Joy," Christian Century, October 4, 2005. And that was the conclusion of the parable—the loving return of the son.

All parents can be grateful for the innate, unchanging affection they have for their children. It is natural. Science and Health explains why. It states the underlying spiritual rationale that instigates and supports the attitude of that father in the parable—who, after all, represented God. It identifies man—and that includes each one of us—as the image and likeness of God. It logically points out that man "has not a single quality underived from Deity," that he is actually "incapable of sin."  Science and Health, p. 475. A parent's parenting has a powerful healing effect as he or she insists on the truth of a child's spiritual identity. The parent's spiritual point of view makes a difference in a child's life—no matter how young or old that child, how near or far.

Take an experience I had with one of my adult children. He lived nearby, but I didn't see him very often. One day, while standing in my kitchen doing the dishes, I found myself thinking about my son. I was feeling a bit sad that he hadn't been particularly friendly lately. My mind wandered back to his childhood days, remembering how sweet and dear he was. Then, it wandered to the teenage years. Teen years don't have to be troublesome—but my son's were. I dredged up a long mental list of past difficulties.

Derived from the divine Parent, parental affection is a comfort to the parent and an anchor for the child at whatever age. Whether it flows from an adoptive parent, foster parent, or grandparent, it is always there—pure and unyielding.

Suddenly, I heard these words like they were the voice of God: "Stop it!" I stopped. "Stop labeling him!" I stopped. I reminded myself of my son's spiritual nature. I thought about the good qualities in him that I appreciated. He had always been a very good helper to anyone in trouble, and he was unfailingly honest. I talked to myself: "Now, here's the thing. Here's the bottom line. This is the fundamental fact: There is one God. There is one Mind. This Mind is the Mind of my son. He is held in this Mind. He flows out from this Mind as the sunlight flows out from the sun. You must identify him as God, Mind, knows him. To God, his Maker, he has never been anything but Godlike and good. Quite thinking of him in a way that is contrary to the truth about him."

I knew my love for my son had never wavered, even during the tough times. And I knew I loved him now. When I finished what was essentially a prayer, I heard my son come in the front door. He walked into the kitchen and said, very gently, words that I had not heard in a long time: "I just stopped by to tell you I love you." My heart melted.

What had happened? Was this a coincidence? Not in my book! Aligning my thinking with the universal Creator/Mind, wholeheartedly affirming the unity of man with that Mind—faithfully to the truth of Mind's creation—resulted in harmonizing both my thought and my experience. Bringing my thought into agreement with the divine illuminated my thought and allowed me to recognize the spiritual accord that perpetually exists between God and His image.

Thoughts do count! But, more helpful than opinions or advice or "lectures" is the power of understanding love. Derived from the divine Parent, parental affection is a comfort to the parent and an anchor for the child at whatever age. Whether it flows from an adoptive parent, foster parent, or grandparent, it is always there—pure and unyielding. 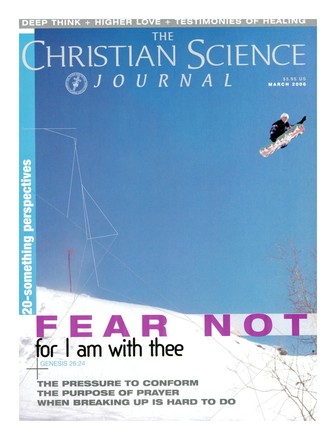 O Christian Scientist, thou of the church of the new-born;...

THE PRESSURE TO CONFORM

THE PURPOSE OF PRAYER

AS MY FELLOW EDITORS on the Journal team can attest,...