The manner of Eve's temptation by the serpent in the Scriptural allegory, strikingly illustrates that subtle phase of mortal mind called suggestion. A suggestion is an implied statement of something without direct assertion. The nature of evil suggestion is seen in the old adage, "A suggestion of evil is worse than the evil." There are limitless possibilities to a suggestion when it is sown in evil or fearing minds. This weapon of mortal thought is used only through ignorance of its power, moral cowardice or inherent viciousness. Speak, act, think with the directness of Truth; what cannot be said or done should not be suggested. Suggestion is the policy of error; it is the two-edged sword of mortal mind wounding those against whom it is directed and cutting off from a sense of Truth those who wield it. The harmfulness of suggestion is greatest when sown by wilfully malicious thought in equally malicious mental soil, or in minds rendered receptive by ignorance of its method and intent. To thoroughly understand the nature and action of suggestion is to be proof against its subtlety. The purpose of this paper is to define the character of suggestion, and its modes of manifestation, through the allegory of Eve's temptation and fall.

Man is placed in a garden, with the privilege of eating of all the trees of the garden save the "tree of the knowledge of good and evil," against which he is warned. The tree symbolizes life; the fructifying of trees indicates life's productiveness. Knowledge is mental cognition. "The thought of foolishness is sin." The Scriptural meaning of foolishness is wickedness. There is no evil outside of mental cognizance of it. The thought of evil assumes through suggestion a seeming reality, and finally appears, to belief, a visible expression of its own error. Eating is partaking. By thus allowing it to become a part of one's self we eat or partake of it. Mortal mind eats, absorbs this knowledge of evil born of its own thought; thus error and mortal mind are found to be one. "What we term mortal, or erring mind, is but a belief and error, from beginning to end, that sees only what it believes, and believes only what it sees through belief." (Science and Health.)

Adam falls into a deep sleep, during which the woman is taken from his side. Asleep in error, real consciousness, that of indivisible identity, is lost, and a belief of duality of consciousness takes its place. The spirituality of individuality is usurped by the personality of sense.

The personality born of the Adam dream is Eve; and personality is ever listening to, and for, the voice of suggestion. "Now the serpent was more subtle than any beast of the field." "Serpent" signifies "to creep"; "subtle" means insinuating, "winding in." Webster's definition of suggestion is, "to introduce indirectly to the thought, to draw to ill by insinuation."

The serpent neither tempts nor lies unto the woman until she sees in the question, "Yea, hath God said, ye shall not eat of every tree of the garden?" a suggestion of something wrong. To give ear unto suggestion is to allow it to urge its claims, wind in and about the thought, until it assumes the proportions of reality and becomes an absolute lie, or denial of Truth. Dismiss suggestion without an instant's parley, and you will gain added courage and strength to meet and master the next stealthy approach of evil.

Seduced by the serpent the woman "saw" that it ("the tree of the knowledge of good and evil") "was good for food." She ate of it and gave unto Adam; their eyes were opened and they knew that they were naked, and clothed themselves with aprons of fig leaves; they were afraid and hid themselves from God. Previous to the serpent's entrance into the garden the man and woman were both naked, "and were not ashamed." "Naked" means "manifest, not disguised nor dressed off with something of another kind." Free from error, man possesses the nakedness of Truth and needs no disguise; is not ashamed, has no sense of guilt, which is a wrong consciousness of self. Dwelling upon a supposed knowledge of evil gained from the suggestion of it is to see, or believe, that knowledge to be good for food, or worthy of acceptance. The partaking of this supposed knowledge discloses its error and discovers its defencelessness before Truth; hence the attempt to hide its nakedness by clothing it with added falsity, or belief. Error must be clothed; it needs every support that belief can supply.

Beware of that thought which introduces itself by subtlety, and which you cannot analyze without shame; beware of that person who suggests, insinuates, but never makes a direct statement. Beware of all that slinks away when the searching eye of Truth is turned upon it.

Beware of, but do not fear, evil suggestion. Remember that, like its symbol, the material serpent, it is a thorough coward. Fearlessness is proof against the attacks of error, but "the heart must be pure to be fearless."

From whence or from whom comes a suggestion of evil? What is its origin? He who has tried to trace back to its beginning the suggestion that has stung him, will admit that his search has been fruitless. No one can seize and pin down a shadow. A suggestion is nothing of itself but is suggestive of something; belief and fear are responsible for its seeming reality. Suggestion is the will-o'-the-wisp of belief that eludes pursuit because it is only the flitting fancy of an evil dream.

"Upon thy belly shalt thou go, and dust shalt thou eat all the days of thy life." Dust signifies nothing. The mental serpent, suggestion, feeds and thrives upon the dust of belief. Witness the uprightness of Truth before the prostrate lie. The man and woman offer excuses for their conduct when questioned, but the serpent is silent when addressed. The serpent cannot speak, that is, suggestion is powerless to defend itself in the presence of truth.

We should be watchful of suggestion's methods in the disease that slowly creeps upon us, through the error that is entertained, and that attends the steps of advancing sorrow. Destroy the first suggesting thought of sin or sickness, and let it not urge its claims. A suggestion of one disease or sin brings in its train others more formidable, for fear augments with every instant that the suggestion is entertained. Let but the tip of suggestion's tail be seen, and mortal mind immediately begins a search for its head, so anxious is this erring mind to endow its evil with intelligence.

Physicists have applied the term suggestion to animal magnetism, experiments having proved that a suggestion instilled into the mind of a subject is sufficient to make him carry out to its conclusion the train of thought or line of action which the instilled thought suggests. In thus naming animal magnetism, mortal mind has builded better than it knew, for the name defines its character. A suggestion is the thinnest film of error, and is entirely dependent upon some mind asleep in belief to receive it and proceed to make something out of nothing.

The most subtle phase of suggestion is self-mesmerism, or self-deception, not only about one's self but in regard to others. The evil suggestion of one's own thoughts is less guarded against, and therefore more dangerous, than that which is received from without. Well does the Psalmist say, "Search me, O God, and know my heart; try me, and know my thoughts: and see if there be any wicked way in me."

The malicious evil of mortal mind is hurtful only to those who through the bite of fear absorb its poison. This poison, looked upon with understanding, is harmless. "If they drink any deadly thing, it shall not hurt them." Suggestion possesses no power of attraction: it is fear that disarms us and brings upon us the dreaded danger.

"Incline your ear unto me; hear, and your soul shall live." If we will do this we shall daily demonstrate the nothingness of suggestion, and shall at last stand where "neither death, nor life . . nor powers, nor things present, nor things to come, nor height, nor depth, nor any other creature shall be able to separate us from the love of God," the All Good. 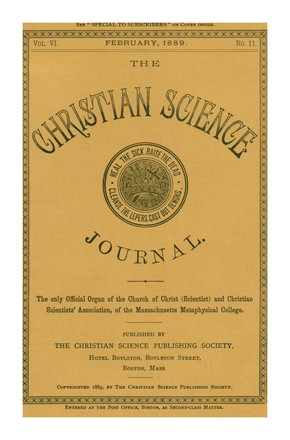 THE PERSONAL AND THE IMPERSONAL SAVIOUR

SEPARATION OF THE TARES AND THE WHEAT

TO READERS OF THE JOURNAL

THE SERPENT AND HIS TEMPTATION, OR THE POWER OF SUGGESTION

With most people perhaps the first step towards Truth is a desire...

For the cause of Truth I submit the following testimonial for...

A Convention of the "Christian Alliance" was held at...

A letter over the signature of Ursula N. Gestefeld reaches...

Said a visitor the other day, "I have a friend in the town of H...

At a meeting of the Church of Christ (Scientist), of New York...