AS A COLLEGE STUDENT, I traveled to Kenya for a study-abroad program that took me and about 20 other students to some of the most beautiful game parks in the world. Afterward, a friend and I set out on our own to meet the extraordinary African people themselves. We eventually found ourselves in a nearly deserted village by the shoreline of Lake Victoria. It was a gorgeous setting, and I was puzzled why so few people lived there. We soon learned that this region had been plagued by malaria, and many people had been forced to move away.

We'd been traveling through the general area for a few days, and I hadn't given a second thought to the mosquitoes, but suddenly I felt in real danger. Many people who live or travel to Africa take malaria pills to protect themselves from the disease. These drugs are not totally effective, and because I've always relied on Christian Science for my health, I hadn't considered using them. Prayer, as I've come to understand its depth and practicality through my study of the Bible and Mary Baker Eddy's writings, has proved to be not just a wishing game, but a power that is immediately at hand and 100 percent effective. So, when I began to experience the symptoms of malaria during the next few days, it was natural for me to pray.

To be honest, my initial prayers in this case were peppered with panic. I was thousands of miles from home in a rural area that I didn't know well, and as fever began to rise in my body, so did the fear of what I was up against. It seemed like the harder I prayed, the worse I felt. Then, quite out of the blue, I felt the gentle touch of the Christ—God's divine embrace—as I opened to a statement in Science and Health. It came in the form of a simple question Mrs. Eddy posed to readers in the chapter titled "Prayer." She wrote: "The test of all prayer lies in the answer to these questions: Do we love our neighbor better because of this asking? Do we pursue the old selfishness, satisfied with having prayed for something better, though we give no evidence of the sincerity of our requests by living consistently with our prayer?" (p. 9).

Wow! In a flash, I realized that the whole thrust of my prayer up to that point had been entirely self-centered. And in less time than it takes me to write this next sentence, I felt a flood of pure love pushing my thought outward. It wasn't a human emotion, but something quite beyond me—a divine presence and power that arrived on the scene with real authority. All the mental turbulence inside me calmed down as I began to pray for the African community—children, families, everyone who had ever been affected by malaria. I even found myself praying for the environment and its tiniest inhabitants. This was God's kingdom we were all in, after all, wasn't it? A flow of thoughts from the Bible's book of Genesis came to mind. Light, water, sky, trees, creatures large and small—God made them all, culminating in God's highest expression—His own children (all of us) made in His own image. Then He blessed His whole creation and called it "very good."

So, what about this disease-carrying bug? That was a lie, not the truth, about God's creation. As I embraced everyone and everything in the consciousness of God's spiritual, harmless, blessed creation, I no longer felt afraid. I no longer felt ill. Every symptom of illness that had been so aggressive and overpowering a moment before was gone.

The most beautiful thing about this healing is how it supported the rest of my trip. My thoughts and prayers from that point on were so much more inclusive and compassionate. And they've consistently remained so. In fact, since then I've found it difficult to pray just for myself about anything. I've come to appreciate the power of Jesus' first word in the Lord's Prayer: "Our" (Matt. 6:9). As I have learned to pray with the consciousness of "our," not "me" or "mine," the healing presence of Love always seems to be right at hand.

I am so grateful for the community of people around the world who are quietly and courageously living and practicing Christian Science today. It seems more important than ever that we consciously affirm and acknowledge for ourselves and others that spiritual healing is for real. 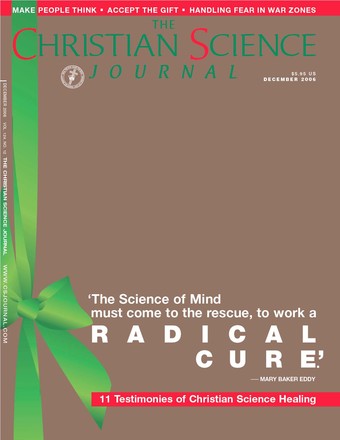 Yes, even your enemies

A church beyond walls

THE FIREFIGHTERS OF HISTORY

EVIL: ONLY A DISGUISE

'MY CONDITION SEEMED TO WORSEN ...'

'I HADN'T GIVEN A THOUGHT TO THE MOSQUITOES ...'

'EVERYTHING AROUND ME FELT CHAOTIC ...'

'ONE HORSE GOT SCARED AND PULLED BACK ...'