I would like to express gratitude to God for a special healing my youngest daughter had many years ago.

Each year I would take her to a doctor for a yearly checkup as required by our school system. After one exam the doctor said it appeared that my daughter had a crooked spine and that at some time I should have her back examined by a specialist. But there was never any push to do this, and shortly after that we moved to another state.

The following year I took our daughter to a new pediatrician, as the new state also required a yearly checkup. After he examined her, he wrote a prescription to have her back X-rayed.

I was regularly attending a local branch Church of Christ, Scientist, studying the weekly Bible Lessons in the Christian Science Quarterly, and praying earnestly about this situation. My husband is not a Christian Scientist and wanted to make the appointment to have our daughter’s back X-rayed. Even so, I’d had many proofs of God’s care and healing power over the years, and I knew I would continue to pray.

After the technician had taken the X-ray and developed it, he said it showed that our daughter had scoliosis and that she would need to be put in a full body cast to straighten her spine. He was to forward the X-ray to the doctor.

I prayed that God created His daughter upright, pure, and free, as Mary Baker Eddy states in Science and Health with Key to the Scriptures: “The great truth in the Science of being, that the real man was, is, and ever shall be perfect, is incontrovertible; for if man is the image, reflection, of God, he is neither inverted nor subverted, but upright and Godlike” (p. 200).

Whenever I thought of our daughter, I declared that she was created in the image and likeness of her heavenly Father, God. I understood God’s creation to be perfect, as the Bible tells us: “God saw every thing that he had made, and, behold, it was very good” (Genesis 1:31). I affirmed that our daughter was a loved spiritual idea of divine Mind and did not need a material solution to make her well. She was already upright as God had made her. She was free to move unrestricted.

I continued praying, and all fear melted away. I literally did not think of her as restricted in any way. She was not just my daughter, but God’s precious child. Meanwhile, my daughter was never in any pain or hampered by her back, so we didn’t talk about it. But we did talk often about God and what she was learning in the Christian Science Sunday School.

When this daughter was in middle school, the school nurse examined all of the girls to check for signs of scoliosis. After checking my daughter, the nurse said that her back was perfect. When this was reported to me, I then remembered the X-rays that had been taken and wondered what had happened to them, as I was never contacted by the doctor.

My daughter went on to become an outstanding athlete, winning the gold medal for high jumping in the state finals. She has also won several medals in running races and has even run marathons. Glory be to God for His protecting and healing power! 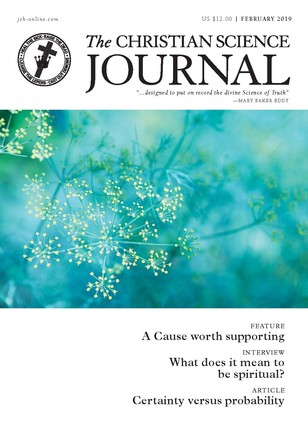