It was a time of many changes in my life. I was starting a new career, having just resigned from a successful decade of professional cooking. I was also preparing to move with my wife to California from my native Canada, to attend a two-year Christian Science nursing work/training program in San Francisco. In the midst of the many preparations, we visited relatives out of town, and at their branch church service one Sunday morning, I left in the middle of the service because of nausea.

Retiring to a quiet room, I prayed for myself as best as I could. As a student of the Bible and the teachings of Christian Science, I pondered several spiritual facts I already knew about God’s creation: that Life is in reality spiritual since God is Life, Spirit. Also, that man’s real substance is as His image and likeness (see Genesis 1:26). On this basis I could challenge what the five physical senses seemed to report: that I could be merely a mortal material being susceptible to spontaneous sickness or organic dysfunction.

I turned up the volume on my spiritual senses, which I knew would help reveal a totally different picture. God, being Love, wouldn’t cause or authorize sickness for His creation any more than He would have evil be any part of His own goodness. I felt enough relief to be able to return near the end of the service.

Right after church I phoned a Christian Science practitioner for help. The condition eased and all but vanished. But over the next two or three months after we moved to California, I called her back often, as the nausea spells returned.

There were fearful thoughts that I had to face up to continually. A more discouraging thought was “How can I become a Christian Science nurse while I seem to be always feeling sick?”—especially since my new work involved caring for those who were relying completely on Christian Science for healing as well. I’d had lots of healings before, but this challenge seemed to be panning out as a “serious” internal problem. Sometimes I wondered if it could be healed through prayer alone.

Despite the ongoing spells, it felt like there was tangible progress in thought. I kept praying and working with ideas my practitioner shared with me. One statement I best recall was from Science and Health, the book that along with the Bible, was what she and I were working from: “Starting from a higher standpoint, one rises spontaneously, even as light emits light without effort; for ‘where your treasure is, there will your heart be also’ ” (p. 262).

Clearly this challenge forced me daily to reevaluate where my “treasure” was. I was moment by moment re-consecrating myself to feeling as close to God, good, as possible. I guarded my every thought, examining each one and then asking myself: “Is this the kind of thought God created? Is this thought God’s reflection?” To the best of my ability, I exchanged unloving thoughts with loving ones.

Sometimes I awoke in the middle of the night feeling quite fearful. But then I would open up the book of Psalms in the Bible at random and find ideas that, without fail, comforted me. The nausea would lift, and I could return to a sound sleep.

Then one time when the discomfort wasn’t yielding, I stayed up, praying and studying all night. It was like my own Jacob-experience when he wrestled with the angel, refusing to let the angel go until he received a blessing (see Genesis 32). I struggled to see my spiritual nature and “wrestled” against the false concept that I was mortally and materially made. By the time dawn arrived, I felt strengthened and refreshed, and went to work inspired and invigorated.

I felt I was actively demonstrating in my life that I could better bring “into captivity every thought to the obedience of Christ” (II Corinthians 10:5). I had a new sense of dominion over all the fears—and with it freedom from any sense of dislocation or strangeness about living in a new country. I was so grateful to have been led to a new, more spiritually based profession—Christian Science nursing.

It was soon after this that the spells completely stopped. The sick feelings vanished. I felt like a new man, and closer to God than ever. I successfully completed the work program and returned to Canada, and have never experienced any recurrence of that difficulty. I eventually became a Journal-listed Christian Science nurse, and still am today.

I’ll never forget the practitioner’s endless encouragement and support as I worked through this experience. I’m so grateful to her and others who make themselves publicly available to give Christian Science treatment. In fact, rather than look back at this experience and want to forget it, I actually cherish the memory of my efforts to deepen my consecration to God. I still feel nearer to Him as a result. I learned that it’s worth the effort to pray without ceasing, because we can trust that God will always take care of us. 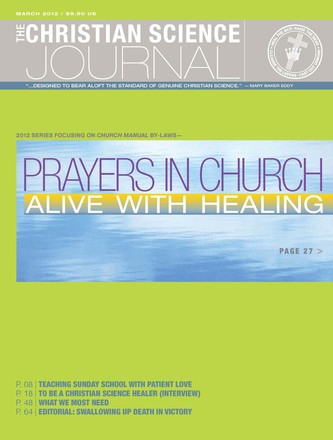 I still have a distinct memory

How can one know if a healing is a faith healing or a healing resulting from understanding?

What should we make of Jesus' physical treatment of the blind man?

Why do Christian Scientists belittle human existence and thoughts?

Traveling to and from lectures

How can you overcome a sense of responsibility for the patient to be healed quickly?

To be a Christian Science healer

Prayer in church—a call to action

What we most need