One evening I challenged a good friend to a wrestling match. A second or two into the match I found myself on the ﬂoor and heard a snapping sound in my shoulder and ribs.

My ﬁrst thought was, “Get up, and shake this off.” But I was barely able to move my arm and shoulder without excruciating pain. I called a Christian Science practitioner, who asked me to deeply consider my oneness with God. I spent that night awake, listening for what divine Love, God, had to say to me. I remember wanting to feel close to God at that moment, and I put that desire into a prayer with the expectation that an answer would come. The night was calm and the fears melted, although the pain and swelling did not.

For the next couple of days, the only thing I could do without the distraction of pain was to walk. So, I would walk by a lake for hours, immersed in prayer. I felt that I was walking with God, with Love, every step. There was no relief from the pain or swelling, but I felt I was being spiritually rejuvenated with an expanding knowledge of God, the great “I AM THAT I AM” (Exodus 3:14) and of my relationship to Him.

My unsettledness and constant physical discomfort became a bit alarming to a friend, who asked me if I’d ever consider getting a medical diagnosis. A diagnosis had never occurred to me. I was convinced, from past experience, that the condition had to be dealt with primarily in thought and that a better understanding of God would bring healing.

I dedicated all my time to studying the Bible and Science and Health. The following statement stood out to me: “When the illusion of sickness or sin tempts you, cling steadfastly to God and His idea. Allow nothing but His likeness to abide in your thought” (Science and Health, p. 495). I loved that phrase “God and His idea,” and what it implied—that God and man are one. So neither can exist without the other. This was the beginning of a change in my understanding of God. I saw that God wasn’t out there for me to glorify and honor from a distance, but rather, I was at one with God.

While praying for myself, I remembered a friend once telling me they thought I was often stubborn. The word obedience came to mind. I looked up deﬁnitions of the word in various dictionaries and found: compliance; a willingness to obey; submitting to a command. I reasoned that instead of taking inventory of all the times I’d been stubborn or disobedient to God’s direction, I should take account of the times I had been compliant and obedient to Him.

Sheep follow their shepherd’s lead and yield to his guidance. I saw that, as the reﬂection of God, Mind, it was natural for me to follow. There was no duality in my consciousness—no tendency to trust God in some instances and not in others. It was my nature to yield to the Shepherd’s promise of wholeness and health.

As a result, I decided to stop assessing the pain every moment and joyfully continue my normal activity. Prior to this incident I had been training for a marathon, and I decided to resume my training and go for a run. I reasoned that if God was my life, my body did not contain life, and therefore it could not stop my normal, healthy activity. I ran the miles, and by the time I returned to my doorstep, the ankle, knee, and foot pain I had endured in the run (supposedly from lack of training) left, but the shoulder pain persisted.

I decided to call the Christian Science practitioner back and share this experience. To my surprise, she suggested I reacquaint myself with a collection of memories about Mary Baker Eddy titled We Knew Mary Baker Eddy, by men and women who had worked closely with her. I went right to my library and opened the book. The ﬁrst page I read struck me. Annie Louise Robertson writes, “Sometimes a healing has been delayed because of a misunderstanding of our Leader’s character, and on the other hand, often a great victory has been won through a sincere appreciation of her service to humanity” (p. 103, 1979 ed.; p. 274, 2011 ed.).

That night, I could not put the book down. Every single word spoke to me. Every healing and story brought me tears. Halfway through the book I realized something: I had never really understood the importance of knowing about Mrs. Eddy’s life. I had often confused these recollections as a ﬁxation or adoration of our Leader’s person or personality. I had always been immensely grateful for her discovery and gift to humanity, but deep down, I felt uncomfortable about the attention and focus that was given to her. Through reading these reminiscences about her, I saw Mary Baker Eddy as Leader. Her obedience to God’s shepherding and guidance, in every single thought, decision, action, and conversation, as shared by those closest to her, was deeply moving.

I ﬁnished the book and knew that I was healed. When I woke up the next morning, my shoulder and chest area felt normal again. All discomfort was gone. A couple of months later, I completed the marathon without any difficulty.

It has been three and a half years since this healing, and I’m still running and enjoying complete freedom of movement.

Words cannot begin to explain the journey that led me to this restoration, but my heart is singing in utmost gratitude for the lessons learned. 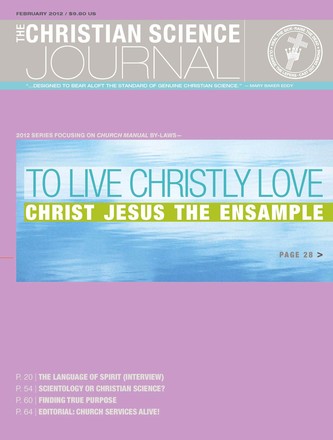