The Apostle Paul is a major figure in the New Testament. In fact, in the book of Acts he could be called the predominant character, his life providing the greatest drama and action.

There are also all the letters, or epistles, of Paul, comprising perhaps the most influential teachings on Christianity after the teachings of the Master, Christ Jesus himself. In his establishing and encouraging of the early Christian churches, Paul showed single-minded vision and spiritual energy in obedience to Christ Jesus' commission "Go ye into all the world, and preach the gospel to every creature."Mark 16:15. Paul is such a remarkable figure that it is difficult to imagine the New Testament without him.

But there is an almost unrecognized Christian we owe so much to for what we have in Paul. This less-known man made a quiet decision to be obedient to God, and in so doing, he played an essential part in enabling the blind and confused terror-of-a-man named Saul of Tarsus to be transformed forever from the Church's worst enemy into its greatest champion.

The quiet man's name is Ananias.Acts 9:10-20. That's about all we know of him, except for the fact that he was a Christian living in Damascus at the time Saul was acquiring legal authority to arrest Christians. The disciple Stephen had already been stoned to death while Saul stood by, watching the cruel execution. Other men and women had been arrested, and Saul was out looking for more.

It would have been possible in the dispersed but spiritually close-knit Christian community that Ananias had lost dear friends or even relatives because of Saul. But he had a vision of the Christ calling him, and he responded with readiness. Before this he may not have known that Saul had been struck blind by a "light from heaven" and had been led into Damascus, where he remained sightless. But now Ananias was told to go to Saul and heal his blindness. At first he reacted the way any of us might, protesting the harm and danger all Christians felt from Saul's persecution campaign.

Think what Ananias was being asked to do! To heal a man who, if he regained his sight, might possibly even arrest Ananias himself, then and there. But when instructed to go because Saul was to be "a chosen vessel" of the Christ, Ananias obeyed.

The story goes on, in the words of the J. B. Phillips translation: "Then Ananias set out and went to the house, and there he laid his hands upon Saul, and said,

" 'Saul, brother, the Lord has sent me—Jesus who appeared to you on your journey here—so that you may recover your sight, and be filled with the Holy Spirit.'

"Immediately something like scales fell from Saul's eyes, and he could see again. He got to his feet and was baptised. . . ."

Certain moments that look dramatic to us in the
now well-known Bible stories probably didn't look
exactly that way back then. It may be that the
devout individuals involved felt a moment of calm
divine direction in the midst of an emotion-charged
atmosphere or a confusing swirl of events.

We know the rest of the story. "The rest," as they say, "is history." Saul of Tarsus became Paul, the Christian preacher and healer, the humble and devoted follower of Christ Jesus. However, Ananias didn't have chapter 10 to read, and all that follows in the book of Acts, to reassure him of the way everything would turn out. Ananias didn't even know, after all, that he would be a character in the book of Acts!

He didn't know the events that would unfold in the years and centuries ahead. He just knew what he'd seen and heard about events where he lived. He knew he'd been given a divine message. And he knew he would obey.

We have considered how difficult it would be to imagine the New Testament without Paul. Now try to imagine it without Ananias. Would Saul have remained there in Damascus, physically and spiritually blind? Just think of the stature of Ananias—the measure of the man! His Christly obedience, willingness, courage, forgiveness, faith. His Christianity was lived, and a self-willed zealot became a devoted worker for Christ. Blindness was healed. Lives were saved. One man's quiet obedience can do much.

The Bible is filled with stories not only of the obvious great prophets and apostles but of such quiet, faithful believers whose supporting roles were indispensable. Here's another example. Many remember the wonderful healing of Naaman by the great Old Testament prophet Elisha. But do they remember the little servant girl in Naaman's household who provided the idea that her master should go to the prophet to be healed of his leprosy?II Kings 5:1-14.

Why should she have suggested that? After all, she was a captive slave. Should she care whether her captors were healed? Should she risk stepping out of line to suggest that a powerful Syrian visit a Jewish prophet? Did anyone listen to females anyway, to say nothing of little girls? Might she be punished for making such a recommendation?

Who knows what thoughts might have occurred to the child? But she obeyed the impulse to declare that the prophet could heal her master. Naaman went and was healed not only of his disease but also of pride and anger. We remember Naaman and Elisha. But do we notice the little girl in her supporting role?

Sometimes accounts of supporting roles don't even supply a name. But the remarkable spirituality of the individual shines through the centuries. When we know them, we are inspired. We love these people. We respect and admire them. We want to thank them.

The greatest tribute we could pay them, though, is to love God and our fellow beings as much as they did. To be as alert and unselfish and prayerful, so that in our day-to-day rounds we don't miss those moments when we, too, might play a supporting role that leads to healing.

Certain moments that look dramatic to us in the now well-known Bible stories probably didn't look exactly that way back then. Did those people have the perspective to see the end of the story at the point when it was time for them to play their part? It undoubtedly didn't seem important at all. It may be that these devout individuals felt a moment of calm divine direction in the midst of an emotion-charged atmosphere or a confusing swirl of events.

Could it be that there are opportunities to play quiet supporting roles every day, and could it be that we would see them more often if we prayed to understand how we could be more useful, more supportive? Perhaps if we prayed for ourselves and mankind in a more consecrated way, we would find more receptivity in ourselves and others to being utilized by God for His healing purpose.

Perhaps we could pray to see the Christ, the divine influence, present within everyone, whether or not he or she seems to be the likely one to recognize it. Are we going to recognize it? That is the question.

We are not responsible for working out another's salvation, but we can play a supporting role. And the more we seek to pray and support the appearing of each one's real spiritual nature as the child of God, the more healing will result. Mrs. Eddy succinctly describes Jesus' healing method when she says: "Jesus beheld in Science the perfect man, who appeared to him where sinning mortal man appears to mortals. In this perfect man the Saviour saw God's own likeness, and this correct view of man healed the sick."Science and Health, pp. 476-477.

But here we are today, with our modest lives. Do our lives matter in the course of the ages? How much of our actions, our church work, will survive? Our Leader, Mrs. Eddy, pondered what would survive. She writes: "The letter of your work dies, as do all things material, but the spirit of it is immortal. Remember that a temple but foreshadows the idea of God, the 'house not made with hands, eternal in the heavens,' while a silent, grand man or woman, healing sickness and destroying sin, builds that which reaches heaven. Only those men and women gain greatness who gain themselves in a complete subordination of self."The First Church of Christ, Scientist, and Miscellany, p. 194.

Whatever self-doubt, self-will, or self-concern would keep us from playing the role we could play, can be set aside. What if the world doesn't at first see the importance of our role? Or even if we ourselves don't at first realize it? Unselfishness, a purified life, will make it plain. 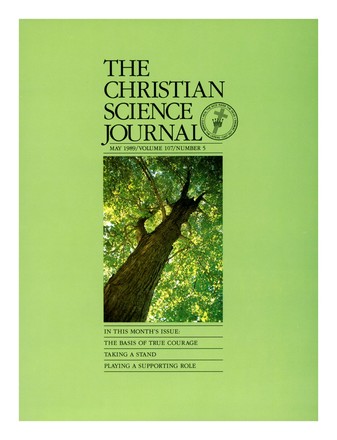 Where is your refuge?

The sounds of Soul

The basis of true courage

The scientific basis of prayer: its role in healing and spiritual growth

What kind of pictures are we taking in?

Healing the patient—absent or present

Meeting the needs of advancing years

Children—their prospects for the future

THINKING ABOUT CHRISTIAN SCIENCE AND WOMANHOOD

True womanhood and "the divine method of warfare"

By Kathleen Wagner Starrett | May 1989

Bending near the earth

By The Christian Science Board of Directors | May 1989