A friend and I went hiking on a snow-covered mountain in southern California. Because of the combination of warm days and below-freezing evening temperatures, many of the trails were covered with a sheet of ice. While walking along one of these trails, I slipped and fell nearly a thousand feet down the slope of a rocky gorge, eventually coming to a stop when my body hit a small tree.

I suffered severe injuries, including a compound fracture to one of my legs, a broken pelvis, a broken wrist and finger, lacerations on my face and body, various internal injuries, and internal bleeding. After the fall I suffered from hypothermia.

The pain was intense, and I remember thinking momentarily that it would have been much easier had I just fallen a few more feet and got the whole thing over with. I knew, however, that I was in a position to prove what I had been taught in Christian Science—that the real man is created in the image of God, obedient to the laws of God. I knew that man's true identity is not contained in flesh and bones but is spiritual. My purpose in living was, and is, to gain a greater understanding of my relationship to God.

In Science and Health by Mrs. Eddy we read (pp. 470-471), "The relations of God and man, divine Principle and idea, are indestructible in Science; and Science knows no lapse from nor return to harmony, but holds the divine order or spiritual law, in which God and all that He creates are perfect and eternal, to have remained unchanged in its eternal history."

My friend ran down the mountain to get help. I spent the next four hours waiting for a helicopter to come and airlift me off the side of the mountain. I remember singing Mrs. Eddy's words from the hymn "'Feed My Sheep,'" words that seemed particularly applicable (Christian Science Hymnal, No. 304):

Shepherd, show me how to go
O'er the hillside steep,
How to gather, how to sow,—
How to feed Thy sheep;
I will listen for Thy voice,
Lest my footsteps stray;
I will follow and rejoice
All the rugged way.

The helicopter finally arrived, and I was flown to a nearby hospital. My mother and father had called a Christian Science practitioner as soon as they heard what had happened. I'm not sure of the details of the situation, as I was unconscious at times, but I do know that the practitioner continued to support my parents prayerfully in their handling of the situation.

Because I was a minor, the doctors threatened to get a court order to perform surgery for what was considered life-threatening internal bleeding. My parents had no choice, but before the surgery was completed, all bleeding had stopped. Later the doctor told my parents, "Someone got there before me and repaired everything."

The prognosis was that I would not be able to walk for many months, and that I might never be able to walk normally again. I was put in intensive care and listed in critical condition. I know that it was my parents' steadfastness, as well as my own devotion to and understanding of the power of the Christ, exemplified by Jesus and explained by Mrs. Eddy, that was the catalyst in the many healings that followed.

During my brief stay in the hospital, through prayer alone my family and I witnessed the complete healing of my severely lacerated face. The original prognosis had been for extensive plastic surgery. On one occasion a doctor demanded that I have immediate surgery to have a metal plate inserted into my broken hip. My mother and father and I rejected this and told the doctor that we would like to continue our reliance on prayer. That evening we continued to pray, considering man as the reflection of God, who is unmovable, permanent Principle. The next morning it was decided that I was well enough to have my legs removed from traction and to complete my recovery at home.

My recovery was steady. This experience began in the middle of February. Within a short time I was able to move about and return to school in a wheelchair. By early summer I was walking with the aid of crutches, even taking short hikes in the mountains of Colorado. During this time the kind support of family and friends was tremendous. Even my high-school band director, who had chosen me to be the drum major shortly before this incident, never once spoke to me about the option of rescinding his decision. Seven months after the fall I was leading our marching band as drum major in a local parade. Since that time I have enjoyed the freedom to participate in a variety of athletic activities, including biking and skiing.

Science and Health states (p. 410), "Every trial of our faith in God makes us stronger." This trial certainly made my family and me much stronger mentally, morally, and spiritually. The healing was a real turning point for me. Since that time I've seen and experienced numerous other healings. I am most grateful for all the good that has come into my life as the result of God's care of His children. 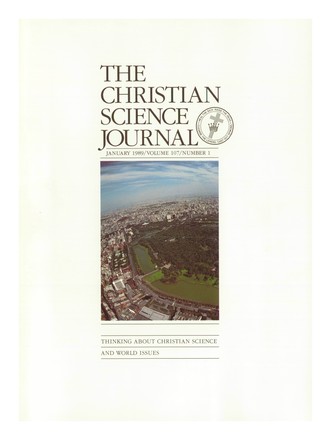 Of prophets and foxes

God's will—good will for all mankind

The prayer of spiritual conviction heals

Outliving finite, mortal definitions of ourselves

Priorities for the Christian Science nurse

A demand: redeem the past

A prayer for Sauls transformed to Pauls

The rewards of seeking the kingdom of God

Have you a key to your church?

It's Wednesday night; let's leap to our feet!

By The Christian Science Board of Directors | January 1989

Before my husband and I married, he had...