I have been healed of chronic stomach trouble, including indigestion and diarrhea. I dealt with this issue for roughly three years, and worked with Christian Science practitioners frequently during this time. I seemed to be a slave to the bathroom every day—needing to use it several times in the morning and repeatedly after mealtimes. I was tempted to look into changing my diet in order to gain temporary relief, but I knew that would not permanently heal the problem since, as we learn in Christian Science, disease actually has a mental origin.

The most absurd thing about this claim of illness was that it seemed to be most aggressive during church services. I was often very embarrassed because of all of the noises my stomach would make and the ensuing disruption. I was tempted to stop attending services, but I knew that would not help the healing of this condition. In fact, church was exactly where I needed to be.

It was during this time that I learned how important it is to “stand porter at the door of thought” (Mary Baker Eddy, Science and Health with Key to the Scriptures, p. 392). Whenever thoughts of fear related to mealtimes or upcoming events would crop up, I would acknowledge that I could only experience a feast of Soul, and that matter was unintelligent and could not have a reaction. I clung to these words from Science and Health: “There is no death, no inaction, diseased action, overaction, nor reaction” (pp. 427–428). I could not experience any sort of “diseased action” in my life, since my being as God’s creation is actually spiritual, not material.

A turning point came when I realized I needed to defend myself against mental malpractice. I prayed to know that God was guarding me always, and that there was not a single moment when I was separate from Him. I also asserted that I couldn’t experience any turbulent or upset thoughts since I reflect the very Mind of God.

Another lesson I learned during this experience was the importance of persistence. There were so many times throughout this period when I would start to feel hopeless because of the lack of physical progress. But I knew I couldn’t become a “sluggard in the race” (Science and Health, p. 22), believing that this sickness was a part of me. I learned in the book of Psalms that God possesses my “reins,” or the innermost parts of my being (see 139:13). One thing I needed to realize was that these innermost parts are not physical internal organs, but the deep thoughts that I embody and express from God! Gaining this understanding helped me see that material organs do not define my spiritual identity.

A Christian Science practitioner shared a wonderful metaphor that helped me understand that my stomach does not possess a brain: “Does your stomach know if you are upside down or upright? Does it know if you are in China or in Paris? No! Then stop thinking it can talk to you and tell you how you are feeling.” I loved the simplicity of the fact that God is the only “knower.” I also found much comfort in several verses from Ephesians, chapter six, where Paul describes the armor of God (see verses 11–17). We are able to “stand” because of the fact that we have our “loins girt about with truth.” Paul also says there, “For we wrestle not against flesh and blood, but … against powers.” This helped me put my thought in the right place and address the offending error as mental. I could not be distracted by what seemed to be a battle with the flesh.

The concept of false prophecy was something I explored during this time, and the spiritual understanding gained from this study played a vital role in my healing. A practitioner brought out a point from this passage in Isaiah: “The prophet that teacheth lies, he is the tail” (9:15). We have several symbols of evil in the Bible that have a tail: the serpent, leviathan, and the dragon. In that passage from Isaiah, I saw the tail as representing all of the false prophecies and false materialistic teaching that evil would suggest are as real as Truth. The tail-like waving of evil suggestions was an attempt to distract me from effectively reflecting the healing power of God.

In my situation, these false prophecies came in the form of discouraging thoughts, such as a fear that I’d have to live with this forever, or, if there was an important upcoming event, a fear as to whether I would be able to go and enjoy myself, depending on how my stomach behaved. But I was learning to handle error by starting from the basis that real being is spiritual. I eventually was able to identify these suggestions as untrue, and they became powerless! I no longer feared those negative thoughts, because I knew exactly what they were claiming the ability to do, and I refused to consent to it.

Persistence in prayer resulted in my no longer anticipating hardship after meals. I was no longer fazed by what the body was doing—I refused to accept disease as reality. I also refused to believe that my stomach trouble was the result of some thoughts I had entertained. I was innocent! After the fear faded and disappeared from my thought, the symptoms vanished. 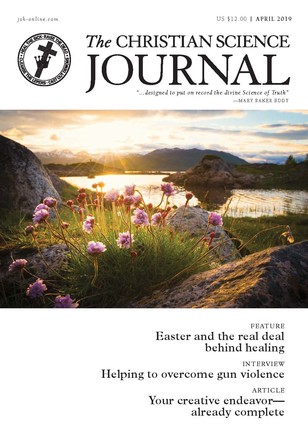 A conversation with humanity

Easter and the real deal behind Christian Science healing

The Science of God’s allness heals

A lesson from a ‘cracked’ watch

Healings of neck and knee pain

A healing of chronic stomach trouble

Menstrual cramps healed ‘once and for all’ by denouncing heredity

A pivotal healing of illness at college

Old and new friends in the Christian Science Hymnal

The Teacher that’s always with us