Church has the potential to bless the entire world, so it’s worth rousing our thoughts about it from stereotypical views of it being dull, conformist, and restrictive, to its real purpose of uplifting and healing. As we weed out any aggressive or subtle mental resistance to the idea of Church, we might feel the need to engage more fully with it, supporting its revolutionary impact on the world.

Church organization wouldn’t be necessary to support our study and practice of Christian Science if it were simply an outdated tradition to which we hold just a perfunctory allegiance. More than just a vehicle for congregational worship, church is vital to our individual spiritual growth. And without the provision of a working church body guided by divine law, we might feel overwhelmed by the magnitude of Christ’s counsel to spiritually and effectively nourish the human family. We might feel inadequate in our personal efforts to serve God in this way.

The central commandments of Christianity are to love God first and love others as ourselves. This requires us to share what we are learning. The activities of The Church of Christ, Scientist, are designed to help fulfill Christ Jesus’ commands to “preach the gospel to every creature” (Mark 16:15) and to “heal the sick, cleanse the lepers, raise the dead, cast out devils” (Matthew 10:8). These activities include public worship services, Sunday School classes for students up to the age of twenty, periodicals containing contemporary accounts of spiritual healing, Reading Rooms carrying authorized Christian Science literature, and public talks for anyone interested in learning more about Christian Science.

Mary Baker Eddy established these avenues for public interaction with her church for the purpose of responding to humanity’s fundamental need for God, Spirit. It is our gratitude for the spiritual and moral blessings we’ve received through church that motivates us to share Mrs. Eddy’s discovery of Christian Science with the world. The church and its outreach work are God’s gift to support not only our own progress but the progress of our community as well.

I had an opportunity to participate in this outreach when a young man walked into the Reading Room of our branch Church of Christ, Scientist, while I was serving. He was clearly very troubled and wanted to know where in the Bible it stated that there is a real hell. As I explained to him that hell is a metaphor for a destructive state of thinking rather than a physical place, he began telling me about many unhappy things in his life. I intuitively felt that he was contemplating suicide, although he hadn’t mentioned this. I was impelled to say directly that suicide is not an answer, but would just be another problem to work out. I assured him how much God, his true Father and Mother, loved him, wherever he was, as God’s very own son. And that God would always love him and see his true, good nature.

The man’s whole demeanor had changed from when he first walked into the Reading Room.

The man was so moved by this that he broke down in tears, admitting that he had indeed been planning to take his life that very morning, and had been on his way to the bridge where he planned to jump off. He said he had stopped in to what he thought was just a Bible shop to ask whether hell was a real place. I talked with him some more about God’s all-embracing love and how God is always present to help us, no matter what we’ve done. The man began to tell me some of the wrong things he had done to others, which seemed to be a greater weight on his mind than the harsh things done to him. He felt he had hurt and disappointed his family and others so much that there was no way to fix things.

I felt inspired to share some practical ideas that came to me of how he might try making up for his misdeeds, and he became quite animated as we talked about ways to put these ideas into action. His whole demeanor had changed from when he first walked into the Reading Room. He was now smiling with gratitude and said that he would not go through with the plan to end his life. He was determined to be productive and work hard to correct his misdeeds. He ended our conversation by saying he hoped he could help others one day the way he had been helped. He hugged me, and left.

Three weeks later, he returned to let me know he was doing well and had begun repairing the broken relationships in his life. I was very grateful to have been in the Reading Room that day, and even more so that our church maintains this public resource where anyone can find spiritual comfort and support. I was happy that this man found out that the Bible is not a book about hell, but rather a window revealing God’s unfailing love for His creation. This is just one example of the many deeply inspiring and life-changing opportunities church provides for us to respond to humanity’s need for God—divine Life, Truth, and Love.

I often think about the experience of the Samaritan woman at the well, where she encountered Jesus (see John 4). She was not a typical believer, and she raised several objections to what Jesus was telling her. But as he spoke, she was so struck by his spiritual perception of her tangled relationships and need for a firmer moral compass, that she was then willing to proclaim to the entire community that Jesus was indeed the prophesied Christ. Not only did her clear recognition and genuine appreciation of the Christ bless others in her city, but her story continues to bless all those since who have read it in John’s Gospel. Jesus’ sharing at the well, and the woman’s heartfelt public declaration of the presence and practicality of the Christ, could be thought of as fulfilling the mission of Church, to bring the good news of salvation to our neighbors.

When our hearts are alight with God’s wondrous love for His children and with the spiritual meaning of the Christ, we feel our commitment to God and Christ so keenly that the desire to take part in the healing outreach of church fills our hearts. We treasure the divinely sanctioned power of Church to share the good news of true justice, peace, abundant life, and love for all. 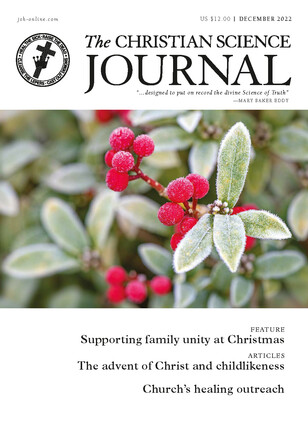