In late 1991, a few days before the new year, I was sitting on my couch drinking and smoking marijuana. I was raised in Christian Science, and I always believed its teachings to be true. However, I had lost my way when I was younger and started smoking marijuana at age 13. By this time I was smoking nearly every day, multiple times a day. I also drank multiple alcoholic beverages each day.

I had tried to quit several times and had succeeded temporarily. I was sober for 13 months in law school. I did very well in school, and one might think that I would have taken that to heart and quit altogether, but the change wasn’t permanent. I quit another time for about three months, but the allure of being high kept drawing me back.

Each time I tried to quit smoking and drinking, I prayed to see myself as God’s expression, as we are taught in Christian Science. But my lifestyle was not compatible with Christian Science, and I was unable to break the grip of addiction.

That night in 1991, my heart started beating fast and I felt as if I were electrified. It was extremely frightening, so much so that despite having rarely sought medical attention in the past, I called my mother, a dedicated Christian Scientist, who lovingly took me to the hospital emergency room at my request. She immediately began to pray for me.

The doctors diagnosed the problem as a panic attack caused by a chemical imbalance in my brain due to excessive alcohol usage. They gave me a drug to calm me down and after a day or two approached me to see if I would take an experimental drug to reduce the panic symptoms. I rejected the offer. By then, my mother and I had already contacted a Christian Science practitioner for help through spiritual means. It was clear to me that drugs had gotten me into this mess, and the solution was to stop taking drugs, not to start taking more!

After being released from the hospital, I threw out the medicine meant to alleviate the symptoms of the attacks. This was a big step in trusting God’s love, as the attacks were continuing and were quite difficult to deal with, but I knew that Christian Science was the way to find permanent healing. I was finally ready to turn wholeheartedly to God in prayer and be done with what I knew was simply a bad habit. Indeed, I had long since reached the point where I didn’t really enjoy doing drugs or drinking, but seemed powerless to stop.

In Science and Health with Key to the Scriptures, the Discoverer and Founder of Christian Science, Mary Baker Eddy, writes: “Progress is born of experience. It is the ripening of mortal man, through which the mortal is dropped for the immortal. Either here or hereafter, suffering or Science must destroy all illusions regarding life and mind, and regenerate material sense and self. The old man with his deeds must be put off” (p. 296).

The suffering I experienced was driving me into the arms of divine Love, and, by turning to God, I was saved.

In working with the practitioner, I wrote daily Christian Science treatments for myself. One theme of these treatments was that as the expression of Life, I was not influenced by chemicals, nor did I reside in matter. I also held to the fact that Mind, not a brain, is the source of my intelligence.

I also remember praying with the idea that God, infinite good, is in control of my life, and that all of God’s ideas revolve in their own orbits, never interfering with each other or causing disharmony. This truth helped me deal with extreme conflict in a work matter I was handling at the time, and this correct concept has continued to help me in my legal career when conflict has arisen.

I was healed almost immediately of all desire to smoke marijuana. This was astounding to me, given that I had smoked for about 20 years and that I had, at times, very much enjoyed doing so. Any desire to drink left shortly thereafter. The panic attacks took some months to dissipate and finally disappear. But they did leave, and I was able to live my life completely free of addiction.

This healing was a huge step forward for me—in my life and as a Christian Scientist. I remember returning to church and tears welling up in my eyes when I sang one of Mrs. Eddy’s hymns. My love of God had never left me, and it felt so good to be home once again.

It has now been over 23 years since this healing, and I’ve never had any desire to use drugs or alcohol in that time. In looking back, I feel that God’s grace saved me. He lifted me up when I was unable to lift myself. I am ever so grateful for the transformative influence of Christian Science. 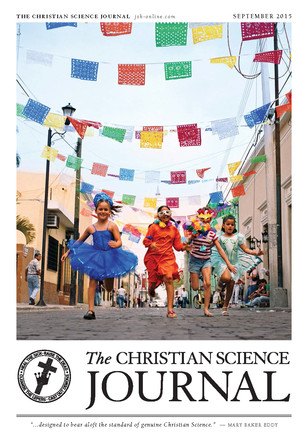