We are all accustomed to living by different kinds of time. Daylight saving time or standard time. This or that zone time. City time or railroad time. In the theory of relativity even duration of time is affected by the speed at which we are traveling.

"How long, Lord?" Ps. 79:5 Most human beings at one time or another, passing through some profound experience, have felt these or similar words welling up from deep within them. Even those who have largely lost trust in a power greater than themselves have spoken these words. Even those who feel that they have lost this trust altogether or that they never had it. On such occasions the first need is often a perception of God's time and of how completely it overrules mortals' time.

In Science and Health Mrs. Eddy writes: "Eternity, not time, expresses the thought of Life, and time is no part of eternity. One ceases in proportion as the other is recognized. Time is finite; eternity is forever infinite." Science and Health, pp. 468-469 What comfort is here for the one crying, "How long?" Mortals' time with all its pains and sorrows is finite, has an end. And that end comes in proportion as eternity is recognized.

God's time, unlike mortals' time, is not concerned with beginnings and endings, with duration or process, with things fleeting or destructible. God's time is concerned always with the moment, with the instant. Yet it is no small and empty instant. This divine instant includes all good from the past and good from the future; in brief, all good. But it is never duration; it remains an instant, the infinite now or all-presence of God, good, and of His wholly good expression.

Christ Jesus is the supreme example of one who lived by God's time. He knew when to act and when to be still. He moved always at God's directing and God's pace. Almost always his healing works were immediate, without mediumship of passing time. In Gethsemane he knew the agony of lonely waiting when his closest friends failed to watch with him for even one hour. But he also knew triumph over mortals' time when he cried out from the cross, "It is finished," John 19:30 or in a clearer translation, "It is completed." In that moment his ordeal on the cross was over; his earthly mission was completed in God's time.

Mortals' time oscillates between haste and delay. Not so God's time. God's time never encourages procrastination; but equally, although of the instant, it is never in haste. A Christian Science practitioner once told a patient, "I don't mind if it takes a thousand years to heal you." These words might appear harsh, and ordinarily the practitioner would not have used them; but in fact she was being deeply compassionate. She had discerned a pressing need to startle the patient's thought and turn it away from a preoccupation with mortals' time, from a willful demand for haste.

The practitioner followed up by pointing out that a thousand years in God's sight "are but as yesterday when it is past, and as a watch in the night." Ps. 90:4 And as the patient yielded up his preoccupation with mortals' time, he became open to receiving the eternal spiritual facts that brought him complete and permanent healing.

Christian Science healing is often immediate. But, as the disciples of Jesus learned, some cases need what their Master described as prayer and fasting. And often one belief that may need overcoming by this prayer and fasting is impatience, the willful, importunate demand to see action according to some mortal calendar in mortals' time. This anxious sense of time may need replacing by a tranquil understanding that in God's time all good is possible and realized. As this understanding of God's calendar, of God's time, is steadfastly and prayerfully held to, mortal appearances of evil are compelled to withdraw, however long they may have seemed to hold the field.

A valuable aid in adjusting ourselves to God's time is a recognition from the very beginning that the end is already present, in God's grasp and in ours. In the eternal realm of God's time promise and fulfillment always coincide as present spiritual fact. The prophet writes of God as saying, "I am God, and there is none like me, declaring the end from the beginning, and from ancient times the things that are not yet done, saying, My counsel shall stand, and I will do all my pleasure." Isa 46:9, 10.

Man expresses the divine ability to declare the end from the beginning. And in proportion as we do this, we find ourselves living more consistently in God's time, in the all-presence of good. 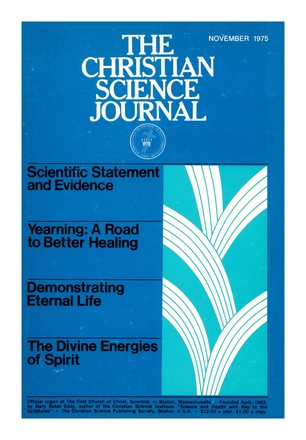 The Divine Energies of Spirit

Science and Health with Key to the Scriptures: Its Impact on People's Rights

We Can Rely on God

Finding Our Refuge from Wrong

Bring What You Possess

Getting Free from Entangling Vines

Yearning: A Road to Better Healing

The Grace of God

"Lo, we turn to the Gentiles"

"One cup of healing oil and wine"

What Time Do We Live By?

Two weeks after I arrived home from...

Mrs. Eddy's opening statement in the...