Last fall I went back to school to work on a master’s degree and study full time. As the semester began, I found myself feeling somewhat underutilized and wondered if I was making good use of my time and abilities, and if the degree I was pursuing would lead to a job that would support not only me, but a family. I regularly found myself waking up in the middle of the night, worrying about the future. Although I prayed about these fears on and off and found brief periods of relief, I seemed to oscillate between feeling at peace and woefully inadequate.

One afternoon I was doing some homework at the public library when these fears consumed my thought, and I decided to go for a walk outside. With all the mental might I had, I denied the aggressive suggestions bombarding me and affirmed that God, divine Love, was my source of supply. I realized that my true need was not for money, credentials, or food on the table, but for the spiritual recognition that God’s goodness was already present, waiting to be seized. The spiritual ideas He gives us meet every human need and are infinitely rewarding and satisfying. I have full access to them, and I only needed to act with the authority that comes from knowing this in order to see what God had already provided.

As I continued on my walk, deep in thought, I passed several homeless men. One of them stopped me and explained that he needed lunch and didn’t have a way to pay for it and asked if I could help him out. Having had similar experiences around my church neighborhood, I declined to give him any money but said I had another errand to run and would consider picking up some food for him. As I walked away, I had a feeling that neither of us expected to see one another again.

I realized, though, that this was an opportunity to put into practice exactly what I had been praying about. After some consideration, I resolved to pick up some food from a drive-through. I even chose a meal that was more expensive than I initially intended, knowing that supply was not coming from the paper in my wallet but from the infinite source of all good. The cashier told me that part of the meal would take a while to cook and that I should park and wait for him to bring it out. To my surprise, he even offered me a free drink because it was a hot day! Here was a clear example of divine Love meeting a human need (see Mary Baker Eddy, Science and Health with Key to the Scriptures. p. 494).

Tickled by this kind act, I parked my car and read some of the Christian Science Bible Lesson while I waited, continuing to acknowledge and appreciate God’s continuous provision. After about 15 minutes, I went inside to check on progress and thought I might be able to save the cashier a trip outside. When I asked how my meal was coming along, his face flushed, and I realized that he had forgotten about me. Then, without my prompting, he and the manager quickly assembled the meal with a little extra food and gave me a complete refund!

My prayers had been answered. As I expected and relied on God’s goodness to provide for myself and others, the human need was met with no financial penalty. I cheerfully delivered the food to the surprised and elated group of men (there was enough for all of them), and continued on with my work for the day. A verse from the Christian Science Hymnal characterizes this experience for me:

When all material streams are dried,
Thy fullness is the same;
May I with this be satisfied,
And glory in Thy name. (John Ryland, Hymn No. 224, adapted)

That tangible evidence of God’s presence has been a cornerstone of my metaphysical work this year as I have continued to pray about employment and my right place, in general. The issue of waking up in the middle of the night faded away soon thereafter. I have been able to look back to this experience throughout the year and move forward confidently into opportunities I would not have thought possible a year prior. 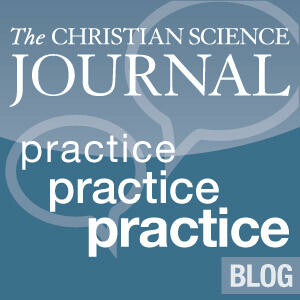 Facing down intimidation with prayer