Some time ago the writer stood on the deck of a ship in the wee small hours of the morning. The stars hung low in the tropical sky, and on the horizon a lighthouse flashed its welcome. We were approaching land. Then came the dawn gradually, gradually, until the sky was aflame with glory.

To the writer, that dawn symbolized the activity of the Christ. Before it darkness fled. As she watched, there came an overwhelming sense of the magnitude of what was going on. Nothing could stop the dawn, because it was impelled by the power which governs the universe, a power which the world cannot touch.

"Why," she thought, "if all mankind—every man, woman, and child of every race and creed—were leagued together to prevent this dawn, if all the diabolical inventions of physical force and nuclear weapons, of human hate and mesmeric control, were hurled against it, they would not even touch it, much less stop it, for the power which governs the universe is God."

In the familiar opening verses of the Gospel of John we read (1:1,3): "In the beginning was the Word, and the Word was with God, and the Word was God. . . . All things were made by him; and without him was not any thing made that was made." The Word is God's self-revealing activity, which, like the dawn, cannot be hindered or stopped.

The intelligent activity whereby Soul reveals its vastness, glory, and beauty is the Christ. And this intelligent activity or reflection is God's infinite knowing, whereby God, Soul, reflects Himself in untold splendor and glory. Whatever Mind, God, knows and is conscious of is the Christ, His infinite manifestation, and this manifestation is Truth. Thus in the Science of Mind, the knower, the knowing, and the known are one in being. There is no division or separation between God and His manifestation.

How divinely natural is this action of the Christ, this compelling power of divine Love! There is nothing labored, nothing harsh, nothing arduous or toilsome about it. Like the dawn, the action of the Christ is inviolate. It is incapable of being reversed or hindered by the supposititious onslaughts of evil.

The prophet Isaiah wrote (9:2), "The people that walked in darkness have seen a great light: they that dwell in the land of the shadow of death, upon them hath the light shined." Mary Baker Eddy says in the Christian Science textbook, "Science and Health with Key to the Scriptures" (p. 504), "The rays of infinite Truth, when gathered into the focus of ideas, bring light instantaneously, whereas a thousand years of human doctrines, hypotheses, and vague conjectures emit no such effulgence."

There is no deliverance from material sense so long as we think of ourselves as frail, finite objects living in a big extraneous world, a belief which is fraught with fear and helplessness. One of the fundamental facts of the Science of Soul is that Mind, or Principle, is not in its idea; but idea is forever in Mind, and Mind is the one and only Ego. Thus individual spiritual man is not a separate, finite ego, as personal sense would have us believe. He exists to glorify God, and he reflects or expresses the eternal, infinite individuality or Mind, which includes within itself every expression of God, from the least to the greatest.

Physical sense is rank mesmerism. The physical senses are diametrically opposed to spiritual truth. They do not acknowledge the allness of Mind, and consequently they do not comprehend the subjective nature of being. Physical sense says that you are a person surrounded by other persons who dominate and control your life; that you live as a tiny speck in an immense world outside of yourself, a world of forces and circumstances which you do not understand and over which you have no control. We cannot fit Christian Science into this pattern or demonstrate its unerring Principle from this basis.

Christian Science reveals the allness of Mind. It shows us that things are not what they appear to be; that the person who is blocking our progress, the circumstance which is crushing out our health, the frustration which is robbing us of joy, are aggressive mental suggestions, not physical conditions—aggressive suggestions arguing that God is not All and that there is something beside Him.

No matter what form error may assume, through Christian Science we can reject it as unreal and illegitimate. We can dismiss it as a suggestion which cannot tempt us because God, the Mind of man, knows it not. God's idea, man, is as incapable of experiencing discord, sin, or limitation as is God Himself. Christ Jesus, our Way-shower and Master, proved this for the salvation of all mankind.

The Christ is the presence of the power of God and the power of the presence of God. The Christ is never static. The manifestation of God's functioning presence, which is the Christ, never ceases. It is never congested; it is never confused, obscured, obstructed; nor can it ever be reversed. It never comes to an end, never overworks, never wavers, never stops. Thus being never grows old; it never wears out; intelligence never lapses into senility and disease; Love never changes into hate; Life never ends in death. The Christ, God's divine power and action, is present under all circumstances, at all times, in all conditions. The Christ is law to every situation.

For example, Abraham exemplifies the Christly attribute of fidelity; Asher, hope and faith. Dan presents an inverted concept of man, which is animal magnetism and has in it no element whatsoever of the Christ. Jesus is the truest and highest human concept, the one which more than all others presents the Christ.

So you and I as persons, and all the persons who form our universe—friends, family, fellow church members, world dictators, and others—are human concepts of the real man, the Christ, concepts evolved by the so-called human mind. As through the Science of Christ the human mind yields to the divine Mind, the human concept improves until it finally disappears in the radiance of God's likeness. Man's individuality and identity, being wholly spiritual, exist apart from materiality and are always intact and complete.

Mortal belief says that each person is the result of a long, long line of human ancestry and that in him are epitomized the traits and frailties of generations of forebears. But Christian Science, through its revelation of the Christ, enables us to commute the mesmeric sentence of personal sense, to banish the bondage of heredity, and to claim the reality and royalty of our being in Spirit.

Jesus consistently identified himself as the Christ, the Son of God. He acknowledged God as his Father and repudiated the ties of the flesh. In him the mesmerism of sensuous generation was broken. Jesus never swerved from the divinity of his origin. He demonstrated the Science of creation. His sense of himself was wholly spiritual. He spoke of himself as coming down from heaven, yet being in heaven (see John 3:13), and he submitted, according to the material senses, to the crucifixion to prove to mankind the eternality of Life and the way of escape from death. Standing before Pilate, in his supreme moment of mockery and trial, Jesus said (John 19:11), "Thou couldest have no power at all against me, except it were given thee from above." In claiming the divinity of his origin, he demonstrated the divinity of his destiny.

In a passage of sublime promise, Mrs. Eddy writes in "The First Church of Christ, Scientist, and Miscellany" (p. 119): "Mary of old wept because she stooped down and looked into the sepulchre—looked for the person, instead of the Principle that reveals Christ. The Mary of to-day looks up for Christ, away from the supposedly crucified to the ascended Christ, to the Truth that 'healeth all thy diseases' and gives dominion over all the earth."

It was the Christ, the spiritual idea, that appeared to human consciousness as the man Jesus. It is the Christ that appears to human consciousness today as Science. If we would find our individuality and identity and the individuality and identity of our loved ones, we must not stoop down and look into the sepulcher of personal sense. We must look up and let Science reveal the spiritual nature of man and the universe.

All that ever has existed is God and His Christ, God and His idea. In reality there never has been a human concept, for the human mind has never projected aught that is real. Christian Science enables us to reverse material sense testimony at every point and free ourselves from the bondage of materiality.

Crucifixion, resurrection, and ascension, birth, death, and all that appears to go on between these points belong to the human concept. The Christ is not resurrected, nor has it ever ascended. It exists as ever-presence and abides in the Mind of God. The Christ is forever at the standpoint of perfection.

Consciousness is never on a cross or in a tomb, nor does spiritual consciousness include a cross or a tomb. Mind's conscious existence is as incapable of being impaired as is the dawn. It forever includes only the things of God, of eternal Life and everlasting Love. Jesus' triumph over death shows us our present immortality.

Throughout his ministry Jesus demonstrated the coexistence of God and man. His assurance of the immortality of the Christ included his assurance of the preexistence of the Christ. He knew it to be impossible for Life ever to have had a beginning. Had Life ever begun, it would have to end. The continuity of existence and of identity is never interrupted by birth or death, nor do existence and identity pass through the vicissitudes of so-called material life.

Jesus understood this. He understood Life and being to be above and beyond all finite sense of existence. He knew that every manifestation of Life evidences the one Ego expressing itself, and is timeless, ageless, deathless, eternal. He demonstrated Life in the fullness of its glory. He knew that the one Spirit, or Soul, includes the beauty and variety of form, outline, color of all that Spirit, Soul, reflects, includes the Christ in its full-orbed glory and radiance.

Through self-purification and spiritual growth, we must demonstrate the Christ as did the Master. We must be able to say with Paul (II Cor. 5:16), "Henceforth know we no man after the flesh: yea, though we have known Christ after the flesh, yet now henceforth know we him no more."' In the radiance of God's self-revealing activity, which is Science, we demonstrate the Christ as the presence of the power of God and the power of the presence of God, and man in God's likeness shines forth.

This article is included in:
1980 - PAMPHLET

Jesus and the Christ 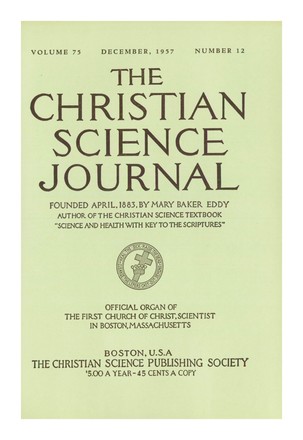 THE ACTIVITY OF THE CHRIST

WHAT OF OUR BODIES?

THE FOUNDATIONS OF THE RIGHTEOUS

MEN AND NATIONS OF CHARACTER

CHRISTMAS AND THE LESSON OF THE HOUR

THE SCIENCE OF SOUL

Letter to a Young Practitioner

THE COMPLETENESS OF BEING

ONE WITH GOD IS A MAJORITY

WHERE "THE DEAR CHRIST ENTERS IN"