It was a summer morning. I had a lot to do that day and awakened with a severe headache. Nevertheless, I took my usual time to pray for myself and to study the Bible Lesson from the Christian Science Quarterly. Then I got busy with my day, trusting the spiritual ideas about Father-Mother God’s care for Her beloved creation to support my activities and that the headache would stop.

Many times I had found this an effective approach—genuine inspiration from God followed by moving forward with assurance. The conviction that God is the maintainer of all His spiritual ideas has a powerful healing effect!

But on this day, the headache just got worse and worse until about two in the afternoon. I had to stop my activities because I felt so ill. So I found a chair in the bedroom, closed my eyes, and reached out with all my heart in prayer: “God, I can’t even put two thoughts together right now. Help me.” Immediately came a simple, direct statement: “This is malpractice.” In that moment, to be candid, it was the last thing I wanted to hear!

Mental malpractice is something that students of Christian Science learn to address, to pray about. Simply put, we could say that malpractice is wrong thinking that would seem to negatively impact or harm others. In Mrs. Eddy’s writings, she refers to “mental malpractice” 25 times, but all with the goal of disarming its mystery and showing that God is the only power. (One example is on page 31 of Mary Baker Eddy’s Miscellaneous Writings 1883–1896).

Even though we may think we know the ins and outs of how to handle malpractice, it can sometimes feel a bit odd to blame a problem on others directing negative thoughts at us. Or it may feel overwhelming to sense that those negative, heavy thoughts are “out there” and we have no idea where they are coming from and how to defend ourselves from them.

That particular day I had some of those frustrations—“I doubt that anyone is thinking negatively about me, and even if they are, I’m feeling too sick to do anything about it.” But this alert about malpractice had felt like a direct response to my prayer for God’s help, so I prayed again, “OK, God. Help me to know what to do about malpractice.” Immediately came another very direct and simple statement: “If you don’t malpractice, you cannot be malpracticed.”

I saw that the important thing in Christian Science practice is to be only in resonance with the one divine Mind, God, not vibrating unwittingly with a supposititious mortal model of many human minds, wills, and opinions. In actuality, I was not a personal thinker, but the very idea, the very thought, of God, Love.

It takes some humility to let go of being a personal thinker and instead yield to our nature as an idea of God.

Mary Baker Eddy uses a lovely music analogy in her poem “Christ My Refuge,” which is also a much-loved hymn in the Christian Science Hymnal (No. 253). It speaks to allowing divine tones to permeate our consciousness:

O’er waiting harpstrings of the mind
There sweeps a strain,
Low, sad, and sweet, whose measures
bind
The power of pain.
(Poems, p. 12)

I could see so vividly that all there was to the malpractice I was struggling with was the belief of resonating with thoughts not my own. Most of it felt as if I were in sympathetic vibration to the negative thoughts floating around in the world’s mental atmosphere. I suddenly became aware that perhaps many people were feeling negative about the heat that day and its supposed effects on health. Also, I was feeling particularly aware that women and mothers can feel burdened and overwhelmed, supposedly causing pressure and tension on nerves. Then again it was possible that someone could be specifically jealous of some recent steps in my life, or perhaps I was feeling impacted by those disagreements among members at church. Finally, maybe those pain reliever commercials on TV had subtly convinced me that pain is just part of life and we need to be medicated for it.

But suddenly none of that mattered. It didn’t matter if I was resonating with ignorant world thought, commercial projections, or specific unkind and envious thoughts about me, because I could refuse to be a personal thinker of thoughts, and respond only to the thoughts of God as His expression.

Christian Science teaches the oneness and allness of God as divine Mind. Mary Baker Eddy states emphatically in “the scientific statement of being” in Science and Health with Key to the Scriptures, “All is infinite Mind and its infinite manifestation, for God is All-in-all” (p. 468). As the very idea of God, and not a personal thinker, man is not on the battlefield of back-and-forth mental action, but is like the sunshine emanating from the sun, which is governed, controlled, and impacted only by its source.

Science and Health explains, “Christian Science goes to the bottom of mental action, and reveals the theodicy which indicates the rightness of all divine action, as the emanation of divine Mind, and the consequent wrongness of the opposite so-called action,—evil, occultism, necromancy, mesmerism, animal magnetism, hypnotism” (p. 104).

If we truly have one God, then we can only have one Mind. It takes some humility to let go of being a personal thinker and instead yield to our nature as an idea of God, but isn’t this what Christ Jesus was telling us to do? He encouraged us to let a personal sense of ourselves go for our identity as the expression of the one I am, or Mind. And as Paul counseled, “Let this mind be in you, which was also in Christ Jesus” (Philippians 2:5).

Well, it’s taking me longer to write this than it did for me to glimpse what I did as I sat in my chair. I could see exactly where I had been holding on to being a personal thinker, thinking various thoughts about others—some concerned thoughts about my family, some critical thoughts about church-related issues, some judgmental thoughts (about myself too), even dwelling on positive opinions about others, but nevertheless swimming around in personal thoughts.

In what I can best describe as a 180-degree turn from this position to a categorical yielding to being effect and not cause, I deeply let go and felt my place as God’s precious idea; I reflected and expressed God and nothing could obscure that fact. Inspiration came as the following rewording of the benediction to Christ Jesus: “This is My beloved idea, in whom I am well pleased” (see Matthew 17:5). And I felt it for everyone. The intense headache was instantly gone.

In those ten minutes of prayer, of simply handling malpractice by refusing to malpractice, I had taken myself off that false back-and-forth mental action and been released from vibrating in sympathetic suffering to personal thoughts. And it wasn’t a big, complicated, scary struggle with evil, but it showed me how important and doable it is to handle malpractice and to see quick healing.

It was wonderful to me to realize that it was completely in my own court to do this work and that it involved the humble willingness to have only one God, one Mind, and to yield to being Mind’s idea, and not a personal thinker. Since this healing I have been quicker to handle malpractice instead of glossing over it or being spooked by it.

What a joy to know that we can let divine Mind be everything to us, as it was to Christ Jesus. 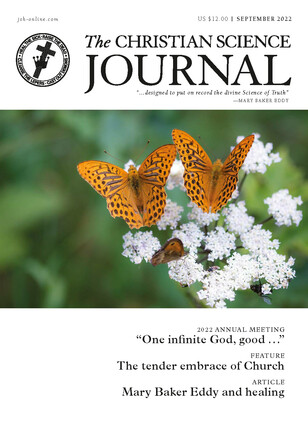 The tender embrace of Church

Rebuilding our concept of church

Meeting in the auditorium of Spirit

The Trustees Under the Will of Mary Baker Eddy

Good holds on to you

The Rock of stability