What a transformation comes over practically every aspect of people’s lives at that very special time of the year—the Christmas season. Families gather, parties are planned, holiday activities are organized. And as normal commerce takes a pause, shopping, spending, and borrowing increase in velocity—and even approach a frenzy.

The Christmas season has come to assume a general, non-partisan, quasi-religious, and even non-religious nature for some. True, the thoughts of many do turn reverently to that prophesied event that took place two thousand years ago: the virgin birth of the child Jesus, called the “Son of the Highest” (Luke 1:32), the Christ, who would “save his people from their sins” (Matthew 1:21). Then very quickly at the close of the Christmas season, the hiatus in normal living ends, and for most, life resumes its familiar pace for another year.

But for the discerning heart, Christmas is not just a commemorative “season.” It’s a timeless, perpetual awakening experience; a challenging, comforting, purifying, unifying, educating, saving experience. Yes, it commemorates the birth of the immaculate Jesus. But what his virgin birth illustrates, the law of creation that it demonstrates, holds a promise for us all. It announces the great truth that God is, in reality, our Father, the Father of all. John explains, “As many as received him, to them gave he power to become the sons of God” (John 1:12).

The virgin birth declares that each one—in proportion to his understanding—can demonstrate the real spiritual man and woman created by God. Jesus came to prove Spirit and spiritual being to be the only life and being. In order to be appreciable to, and reach, human consciousness, Christ Jesus appeared on earth through a human sense of birth, with a human mother. He went through all the human processes of biological birth—except that he originated as no other human being ever had before, or ever would again: God was his only Father in heaven and on earth.

For the discerning heart, Christmas is not just a commemorative “season.”

The human Jesus’ spiritual origin conveys not only the glorious Christmas message that God is, in reality, the only creator of men and women. It also declares that sexual conception, birth into matter, ancestral connections, heredity, humanly transferred characteristics and emotions, early development and conditioning, family experiences, have no basis on earth, just as they have no basis in heaven. They can be proved powerless to affect us as we accept God as our true and only Father-Mother, and refuse to buy into the belief of mortal history. We can pray with the Master: “Our Father which art in heaven …. Thy will be done in earth, as it is in heaven” (Matthew 6:9, 10).

Jesus once asked, “Who is my mother, or my brethren?” And he indicated, “Whosoever shall do the will of God, the same is my brother, and my sister, and mother” (Mark 3:33, 35). He came to earth, sent by the Father through the power of the Holy Ghost, the law of Love, to do His will.

Our Master, fully conscious of his divine origin, understood his identity, his selfhood, to be the Christ—not material, but spiritual. He knew himself as a complete spiritual idea—an individual manifestation within the divine, ever-conscious Mind, God. He described this relationship, saying, “I and my Father are one” (John 10:30). His mission was to prove that we are all individually linked by spiritual law to that same divine source. He taught and proved the continuing presence and activity of the Christ, the divine idea of good, not the temporary, seasonal hope of sharing human goodness.

Jesus’ teachings and example map out the way for us to spiritualize our thought, and thereby renovate and renew our lives. His lifework, understood as “the way,” opens an unrestricted vista for us all, and calls on anyone and everyone to heed the universal scriptural call to heal the sick, raise the dead (figuratively and literally), cast out evil thoughts and impulses, preach and live the gospel that declares, “On earth peace, good will toward men” (Luke 2:14), and eventually reach the demonstration of life in God, immortal Life and Love.

“Christmas” came to me (or I could say, “found me”) one warm summer day many years ago while I was climbing over some rocks on a rugged seacoast in New England. I was thinking about God—not in any specific way, just feeling how much I loved Him/Her! And the voice of divine Truth, which I have since learned to recognize as the Christ, the divine message from God, came clearly, forcefully, and at the same time, gently, to my thought. It spoke to me about myself and about the path I was to follow. It gave me a sense of what my true origin and being were, above and beyond what the material senses would describe as material, biological, psychological, or physiological. For just a moment, I felt an actual sense of my unity with my Father-Mother God.

It was clearly Christmas in July, something I have never forgotten. It had nothing to do with the scenery, the weather, or any personal feelings or emotions. I felt Christ come to me, and in the words of a poem by Mary Baker Eddy, “tenderly, divinely talk” (Poems, p. 12). That “Christmas in July,” that vision of my true origin and destiny, has never left me over several decades. It has encouraged me when the going has been tough. It has inspired me when resistance would dog my steps. It has comforted me and brought healing to me.

One time I was scheduled for an important public activity when the auto I was driving was struck by another car that had disobeyed the “rules of the road.” The accident caused severe injury to my ribs. It was difficult for me to move freely or walk, but I was able to return to the room where I was staying. How could I fulfill my obligation, which required a prominent public appearance the very next day? I spent that night in prayer.

That “Christmas in July,” that vision of my true origin and destiny, has never left me over several decades.

In the Christian Science textbook, Science and Health with Key to the Scriptures, its author, Mary Baker Eddy, writes under the paragraph heading, “Remedy for accidents”: “When an accident happens, you think or exclaim, ‘I am hurt!’ Your thought is more powerful than your words, more powerful than the accident itself, to make the injury real.

“Now reverse the process. Declare that you are not hurt and understand the reason why, and you will find the ensuing good effects to be in exact proportion to your disbelief in physics, and your fidelity to divine metaphysics, confidence in God as All, which the Scriptures declare Him to be” (p. 397).

It became clear to me that I must understand the reason why I could not be hurt. I could see that the unfortunate effects of believing that 2 + 2 = 6 would be quickly overcome by realizing the mistake and correcting it with the mathematical fact. In this situation, I needed to hear and understand the timeless Christmas message of the Christ, that the real man and his relation to God are perfectly maintained by the Holy Ghost, the law of God. The practice of Christian Science over the years had shown me that to the degree I could understand that message, I could experience it in my daily life.

The same voice of Truth that I had heard long before, the eternal Christmas message that is ever available to heal, comfort, and save, lifted me out of pain, injury, and shock, and I was able to fulfill my obligation. I was able to move freely, think clearly, and speak intelligently. That same recurring “Christmastide” has been the most precious gift that has ever come to me, and that I have been able to share with others at all seasons of the year.

As I have thought back over the many healings I have experienced over the years, I have seen that God, divine Mind, doesn’t know accidents, illness, or mistakes, because all-knowing divine Mind couldn’t know what it hasn’t made. But divine Mind has made health, harmony, order, law, freedom, and normalcy, because divine Mind knows itself and all right ideas and all true individuality. For God not to know or be made known, and for divine Science, the Holy Ghost, the law of God, not to be manifest, not to be expressed, not to be seen “on earth as in heaven,” would be for divine law to have no effect, for Mind to have no manifestation, or for Christ to have no Jesus.

Christmas is ever recurring to my consciousness as each day I understand more of the nature of God, my dear Father-Mother, of Christ, divine Mind’s dear offspring, and of my true selfhood as Love’s beloved child. 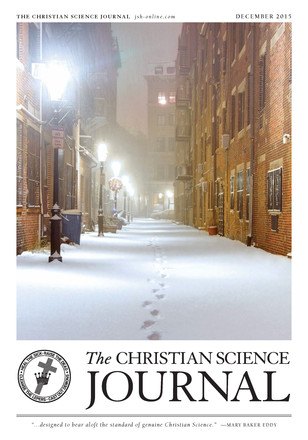