What is healing? The notion that Christian Science is but a system of healing sickness without resort to drugs, or other material aids, is a wholly mistaken one.

It is true that healing sickness is included in the Christian Science system, and that it is an important feature; but the term "healing" as used in Christian Science means vastly more than curing sickness, as sickness is usually defined. There is, however, a broader definition of the word sickness than that ordinarily accorded it. This larger definition is sometimes expressed by the term "soul-sickness," thus distinguishing it from mere physical ills. "Sin-sickness" is yet another term.

In Christian Science these different designations mean one and the same thing. Were there no "soul-sickness" or "sinsickness" there would be no body-sickness, or physical ills. This remark, nevertheless, must be taken in a qualified sense. It is not intended to imply that in each individual case a particular form of sickness is due to a particular form of sin, nor even that any conscious sinful conduct, or line of conduct, has been productive of the sickness. However true it may be that much of humanity's sickness is the direct result of wilful sin, it is not true in the most general sense. It is rather true that the individual suffers as a consequence of the racial belief in the inevitability of sickness, and the general mortal fault of believing in powers apart from God.

The law of human error, asserting itself as a universal belief that matter can be sick and suffer, and that matter can cure matter-inflicted sickness, is a sinner, and the individuals who fall victims to this untrue belief, become, in that sense, paradoxically speaking, innocent sinners. If, then, a law of human error is the root-cause of sickness, the only true remedy is the destruction of that erroneous law. Its destruction is the real healing, for in the measure of its destruction is the resulting law of sickness disappearing.

This law, so-called, we say is human belief; hence it is mental, not physical.

Healing, then, in its truest and best signification, is the regeneration or salvation of mankind from those false beliefs or conceptions which bring with them the long trains of illnesses, diseases, troubles, sorrows, and discords which may well be summed up in the single word Sickness.

Christian Scientists are able to heal themselves and others through their understanding of the religious philosophy thus hinted at. They have learned through the better interpretation of that great saving and healing book, the Bible, which has been afforded them by their study of the Christian Science doctrine, that they can remove from the mind of the individual the false belief instilled into it through erroneous education, and substitute for it the understanding that in the divine Law there is no sin, and, therefore, there can be no consequences of sin, except as these flow from the law or beliefs of the human mind.

A deep and conscientious study of the writings of her who had the spiritual perception and conception to reach an interpretation of Scripture that brought out its healing sense, will unfold the real, true, and ultimate meaning of the word Healing.

See "Science and Health with Key to the Scriptures;" "Miscellaneous Writings;" "Unity of Good," etc., by Mary Baker G. Eddy. 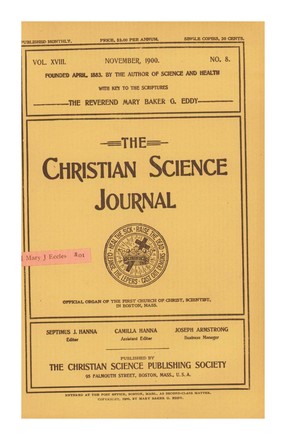 A RELIGION THAT SATISFIES

WHAT IS OUR GOD?

NATURAL SCIENCE IN THE LIGHT OF CHRISTIAN SCIENCE

OF THIS BE CONFIDENT

THE LAW OF RIGHTEOUSNESS

LOOK FOR GOOD, NOT EVIL

AS A VESTURE SHALT THOU CHANGE THEM

THE MISSION OF CHRISTIAN SCIENCE

For seventeen years I was an invalid, caused by the...

For over four years I have owed a very large debt of...

I first heard of Christian Science about January 1,...

I would like to give, in a few words, my experience and...