We live in an age of protest.

Everyone seems to be against something, and rightly so in many cases where evil is being detected and overturned. But are enough effective, permanent solutions to the problems of today really being found? Are the basic errors in human experience —self-interest, envy, greed, hatred, distrust, revenge, which result in misery, disease, and death—being dealt with properly? If they were, violence and war, poverty and sickness, would dissipate more rapidly.

Can mere human reason, compassion, and ability lead to our finding the answers? Apparently not. Are there answers to be found beyond human consciousness limited by empirical theories and fruitless trial and error experimentation? Is there something fixed and permanent, a spiritual law, to which we can turn?

Indeed there is! Christian Science, the law of infinite, divine good, has been protesting against inhumanity, injustice, futility, despair, for over a century. It has done so in a Christianly constructive way through the healing of lack, inharmony, and selfishness, as well as fear and disease, teaching that these conditions are misconceptions of being and dealing with them as errors of thought, which can be corrected through compassionate understanding of God's law of perfection. The protest has been benign and confident, regenerative and redemptive.

Among definitions of the verb "protest" are "assert, affirm, aver." Effective protest must have a positive foundation of moral right as its substance and must be able to point to reasonable, compassionate means of bringing about change. To be permanently effective, protest must proceed from a spiritual basis and demonstrate spiritual law.

Perhaps the most dramatic and effective protestor in all history was Christ Jesus. His verbal condemnation of hypocrisy, injustice, and sin was uncompromising and vigorous. His protests against sickness and death, lack and limitation, were scientific and efficient demonstrations of the eternally available law of God that annulled false, material law. When Jesus at the pool of Bethesda said to the invalid who had lain helpless for thirty-eight years, "Rise, take up thy bed, and walk," John 5:8; he was expressing practical protest.

In Science and Health Mrs. Eddy states, "It is neither Science nor Truth which acts through blind belief, nor is it the human understanding of the divine healing Principle as manifested in Jesus, whose humble prayers were deep and conscientious protests of Truth,—of man's likeness to God and of man's unity with Truth and Love."Science and Health, p. 12;

Every Christian Science treatment is, in effect, a protest—a protest of the omnipotence of God and the perfection of His idea, man, a protest against deceptive, material belief, which is manifested in sickness, poverty, injustice, lawlessness.

Mrs. Eddy writes: "God never punishes man for doing right, for honest labor, or for deeds of kindness, though they expose him to fatigue, cold, heat, contagion. If man seems to incur the penalty through matter, this is but a belief of mortal mind, not an enactment of wisdom, and man has only to enter his protest against this belief in order to annul it."p. 384; The spiritual protest that heals sickness is equally effective in correcting inharmonious human relationships, solving problems at work, overcoming lack of income, education, or opportunity. This has been proven repeatedly by thousands of Christian Scientists.

Treating disease, discord, and disaster as belief may be incomprehensible to the human mind. The truth of this fact must be spiritually discerned. How? Reason helps. Divine revelation, which comes as a result of humble, receptive prayer, is the key. Demonstration through healing in one's own experience is perhaps the most convincing element. And beyond this the true Christian Scientist turns to universal, impersonal healing activity. He turns the penetrating laser beam of truth on selfishness, confusion, riot, war. In this way he becomes a positive force, joining with many others to help bring about universal peace, prosperity, and justice.

Earnest students of the Science of Christianity prayerfully seek an understanding of the Principle of Christ-healing so that its power will be more instantly and constantly available to them. Beginning with the realization of God's allness and man's at-one-ment with Him as His expression, the student learns to view the universe from a divinely spiritual standpoint. He learns to yield his consciousness to its divine source, to see more of what God creates, to recognize only good. He affirms God as his Mind. Thus he learns how to reject errors scientifically.

The Christian Scientist should frequently take time to ask himself such questions as these: "How effective are my protests of Truth? Am I seeing with spiritually positive vision? Or am I being mesmerized by mortal mind's gross sensualism and resistance to Truth?"

Mesmerism is broken when one is brought sharply back to spiritual reality. A genuine Christian Scientist seeks reality not by dwelling on the inevitability of evil but by realizing the ever-availability of infinite good. He learns to love impartially and live courageously in the face of injustice, malice, and aggressive materialism. He helps others and tries to reform society in every right human way he can. Mrs. Eddy reveals an attitude her followers should emulate: "Difficulty, abnegation, constant battle against the world, the flesh, and evil, tell my long-kept secret—evidence a heart wholly in protest and unutterable in love."The First Church of Christ, Scientist, and Miscellany, p. 134

A universe that is complete, limitless, peaceful, just, joy-filled, is not a Utopian dream beyond one's grasp. It is a spiritual fact, the only truth of God's creation. Consistent realization of this fact, and demonstration of it in fearless and honest, but loving, word—in Christian attitude and healing deed—will eventually bring this universe into general view so that all mankind may see God's law in operation.

Constructive protest is a divine demand. Truth must penetrate the negations of falsely educated beliefs. Its presence is realized in the hearts of those who truly love, who protest against all evil and for the reality and dominion of good.

We do indeed live in an age of protest. Affirming the allness of Love and consistently living that Love in courageous, truthful words and acts is the elevating adventure of effective protest. 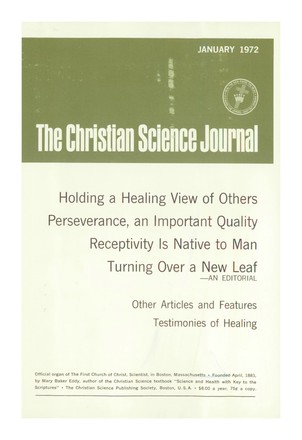 Holding a Healing View of Others

Truth Does the Work

What Is Your History?

Receptivity Is Native to Man

Let Us Not Be Imposed Upon

"Auditions will be held"

The Spirit That Heals

Applying Truth to Our Environment

TO ALL MY BROTHERS

Jesus Comes to John for Baptism

Annual Meeting of The Mother Church 1972