AS THE CHILD of Jewish holocaust survivors growing up in post-World War II Europe, in what was a predominantly Christian society, I lived in an environment of what you might call "perceived hatred." Over the years, I did hear anti-Semitic comments made in my presence, as well as hearing of anti-Semitism in the news. And I couldn't shake the feeling that I was walking through life with a shadow of hatred over me. Fear of this hatred dominated my thoughts during my teens and early twenties.

During this time, there was also a resurgence of racism in the United Kingdom's political arena. I felt right in the thick of it, because racist gangs were turning up at the rock concerts I was attending and disrupting them with violence. All of this compounded my sense of living under siege.

When I began to read Science and Health, though, my thinking began to change. I was learning about the nature of God as infinite Love and that each of His children is a reflection, or manifestation, of that Love. Rather than believing that hatred was a natural part of human relationships, I was beginning to glimpse that nothing could be more unnatural, since there is no place for hatred where Love is All.

I felt this palpably one day when I'd agreed to go to a cafe with a friend for chat despite being in pain. As we sat there in the cafe, I suddenly had the most precious sense of God's love—not just for my friend and me, but for everyone in the cafe and everyone on the streets outside.

The cafe was in one of those areas in London where you literally have the whole world on the street—people from the Middle East, Africa, Ireland, all over. And I just had this feeling that if God was loving everyone in that street—which I tangibly felt He was—then He was loving them even if any of them believed themselves to be racists. Not that God could love racism, but God just loves everyone as His children. And I thought, well, then, I can do a better job of loving these people, too, seeing them as God does. I wanted to feel that unconditional love of God for everyone.

What I felt that afternoon in the cafe not only healed me of a long-standing physical problem, but it also freed me from my fear of other people's hatred and of being the victim of that hatred. That fear dissolved in the recognition of God's ever-present love.

Perhaps most significantly of all, I feel that this experience was the launching pad for countless instances of diligent and humble prayer in the years since—prayer in response to world issues where hatred has been a major element. Whether it's Darfur, anti-Semitism in Europe, or the current situation in Iraq, I've found that now, it's much easier for me to get to the point where I can really see this thing called hatred for what it is—not a genuine part of any individual or group, but a false suggestion that's claiming to govern them. And from there I've been able to see how my prayers can contribute to disabusing humanity of the misconception.

The world today can certainly benefit from the strength of our unified prayers dismantling the false claims of hatred that would seem to divide the children of divine Love. 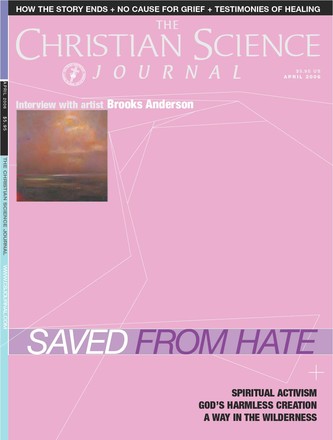 The cross and the crown

A CONVERSATION WITH BRIAN TALCOTT | April 2006

A SPIRITUAL VIEW OF BIRDS

THE PROMISE OF RESURRECTION

NO CAUSE FOR GRIEF

THE RHYTHM OF SPIRIT

Not subject to decay

The only picture that counts

God's side of the story