Twelve years ago I had a rewarding opportunity to serve as a chaplain at a men's jail in California. One evening while I was waiting to be escorted up to the chapel, the guard said to me, "Why do you take your time to come here? These men are not worth your time." After praying a moment I answered him, "If you were having a bad dream, a nightmare, wouldn't you be grateful if someone shook you and tried to waken you from that dream?" This conversation reminded me of a "nightmare" experience I had that lasted about eight years.

I have worked in the trucking industry for forty years. My father was in the trucking business, so I grew up in it. I had always wanted to get into specialized hauling, cranes and bulldozers and so forth. When I did get enough experience to get a job in this kind of work, I was surprised to discover what it entailed. We would sometimes work all day and then pull a load to northern California from southern California that night, a good ten-hour drive. Sometimes, this schedule would last all week.

I had quite a time staying awake, and one night I asked a fellow I worked with how he was able to stay awake. He offered me some pills that he took. I declined them, but after fighting sleep night after night I asked him for some. The first one I took kept my eyes open and made me alert. I thought these were the greatest and wondered why I had declined them before. I saw nothing wrong with taking them.

As the weeks passed, I was using more and more of the pills. When I would get into bed, I couldn't sleep, and I would take more to get through the next day. Even when I was home on weekends, my body would be so tired and I would be so grumpy that I would take them; I felt I had no source of strength other than those pills.

My wife tried for years to awaken me, offering help through Christian Science, but I became verbally abusive. Finally after several years she told me she could not put up with it anymore. She moved to another city and took a job. She told me she would always know what was true about me as God's child. I remember thinking to myself, At last I won't have to listen to any more Christian Science talk.

I continued on with my lifestyle, but after a while I began to dislike myself very much. It dawned on me that I had lost a lot. I tried to stop taking the pills. By this time I was using twenty-five to thirty a day. A lot of the time I wasn't even sure what or how much I was taking. I had prescriptions with two doctors, and I was buying the pills on the black market, too. I couldn't stop by my own willpower, and I became very depressed about this.

One Sunday morning I was listening to the radio when a Christian Science program came on. It included healings that had come about through Science. A young woman gave a testimony of being healed of the same addiction I had. I had thought I was the only one with this difficulty, but her addiction had been as serious as mine. Listening to her gave me hope and courage.

I later called my wife and told her what I had heard on the radio program. I asked her if she would consider returning to me, and I said that I would like to work out my problem through Christian Science. Well, she agreed to return. For the next few months she prayed with me. I had changed jobs and was home in the early afternoons. I would get the Bible and Science and Health with Key to the Scriptures by Mary Baker Eddy and the Christian Science Quarterly, and I'd study the Bible Lesson for that week. Sitting at the kitchen table across from my wife, I would smoke cigarettes as I read. After three or four weeks, one afternoon while I was studying the lesson I lighted up a cigarette. It tasted awful. I put it out, and I have never had the desire to smoke again. This healing gave me hope and inspired me to continue studying Christian Science.

Our daughter had given me a paperback copy of Science and Health, and I carried this with me in my truck. Page one of the chapter "Prayer" begins: "The prayer that reforms the sinner and heals the sick is an absolute faith that all things are possible to God,—a spiritual understanding of Him, an unselfed love." I didn't understand all that I read, but I thought much about absolute faith and unselfed love, and I began to believe that all things are possible to God. I also hung on to these verses from Proverbs: "Trust in the Lord with all thine heart; and lean not unto thine own understanding. In all thy ways acknowledge him, and he shall direct thy paths."

I rejoiced because I realized it had been a nightmare from which I had been shaken and awakened. But there was still more to learn.

While I was extremely grateful to be awakened from this addiction, I felt very ashamed that I had succumbed to such a weakness in the first place. I had always prided myself in being strong, and this situation had knocked me down very low. It was as though a scar were left on me after the healing of the addiction.

Then one day a verse in the Bible Lesson stood out to me: "Study to shew thyself approved unto God, a workman that needeth not to be ashamed, rightly dividing the word of truth" (II Timothy). I saw clearly that my job was to please God, not man. And this verse from Ecclesiastes was also helpful: "I know that, whatsoever God doeth, it shall be for ever: nothing can be put to it, nor any thing taken from it: and God doeth it, that men should fear before him. That which hath been is now; and that which is to be hath already been; and God requireth that which is past." In that moment I saw God's perfect creation. I understood that nothing can be added to or taken from that creation, and that man can only live in the present. Yesterday belongs to God, and so does tomorrow.

I am so very grateful for Christian Science and for my dear wife, and her practice of this Science, which woke me from this dream. I'm also grateful for the woman who told of her healing on the radio program. Since this healing I have received class instruction in Christian Science, and I have served as First Reader in a branch Church of Christ, Scientist. I have also had many other healings. I am so grateful.

This article is included in:
1991 - SPECIAL EDITION

We can win out over drug abuse with God's help 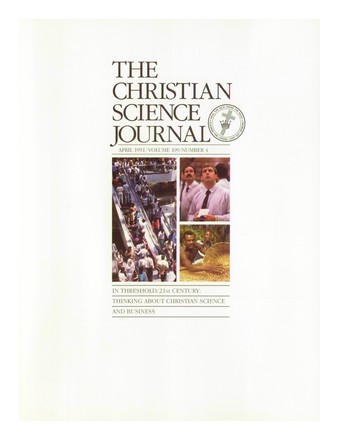 Are we faithful to both cross and resurrection?

Healing and the new birth

"None of the above"

THINKING ABOUT CHRISTIAN SCIENCE AND BUSINESS

Friendship in the church

Mother Church membership: going into all the world

Primary class instruction: a preparation of the heart

Twelve years ago I had a rewarding opportunity...

I am profoundly grateful to have been raised by...

By Selma K. Hudson with contributions from David Hudson | April 1991

"Let it be known this day that thou art God in...