It was the first day of classes after the Thanksgiving holidays, and I dreaded returning to the school routine. No, I'm not a student—I'm actually a mom. But Julianne, one of my teenage daughters, requires many additional hours of assistance with class work. The holiday had given me a much-needed break from the daily homework load.

As I went about my day, catching up on all the household chores, I began to feel the symptoms of a migraine. I knew the girls would be home soon, and I needed to prepare dinner, so rather than take the time to pray about this, I continued with my work. All the while, the pain and nausea grew.

Julianne arrived home from school with yet another weekly math worksheet to complete. The first problem was one we'd been working on together for nearly four months. When I asked her to complete it, she gave me a blank stare and said, "I don't remember the steps." Exasperated, I explained that the answers weren't going to just fall from the sky—she'd have to work out the problem to find the solution. Needless to say, this wasn't the best way to begin a long assignment. When it became clear that we weren't making any headway, I suggested we put the problems away for the evening.

But after a restless night, I awoke with many of the same symptoms I'd previous day. So after I sent the girls off to school, I decided to finally spend some quiet time in prayer.

I began by reading the chapter called "Prayer" in Science and Health.I came across a question that changed the course of my thoughts: "Who would stand before a blackboard, and pray the principle of mathematics to solve the problem? The rule is already established, and it is our task to work out the solution" (p. 3). I realized that, in a sense, I'd been waiting for healing to fall from the sky. I knew the principle of harmony and health was found in God, but I hadn't really been practicing this truth, much like my daughter hadn't been practicing the principle behind her math problems. Further on in the chapter I read, "What we most need is the prayer of fervent desire for growth in grace, expressed in patience, meekness, love, and good deeds" (p. 4). I realized I hadn't expressed much patience, meekness, or love during my daughter's home assignment. Instead of recognizing the ever-presence of divine Love, I had reacted with aggravation and annoyance.

For the rest of the day, I had a new goal. I decided to make a conscientious effort to catch myself in the act of reacting and instead practice patience and grace. So when Julianne arrived home from school and we began to work on her homework assignment, I would stop mid-sentence, if necessary, to replace impatience with patience, aggressiveness with meekness, lack of interest with love, and self-righteousness with kindness. In a sense, I had my own worksheet of problems to complete—and although this took some effort on my part, for the first time, I felt my joy return. Julianne agreed to practice the math steps we'd covered in the months before, and we were much productive, minus the impatience and aggravation of the previous day. When my husband returned from work, the headache was gone, dinner was ready, and Julianne had finished her homework without any tantrums—hers or mine.

I realized the headache was just a symptom of a bad routine I'd gotten into with homework and the household. I had taken on a false sense of responsibility for my daughter's success in school, as well as for all the things I needed to do in our busy home. But my prayer that morning and my healing was the turning point in our family. I now find it much easier to be patient. I've stopped watching the clock all the time and dreading Monday afternoons when the girls come home with their piles of homework. Through prayer, the tension in our home—and in my body—vanished.

Julianne, my daughter from a previous marriage, was diagnosed as having a severe learning disability, Attention Deficit Hyperactivity Disorder, a pervasive learning disorder, and semiautism as a young child. The prognosis was that she would never read, write, or be able to function in a mainstream classroom.

As the custodial parent, I feel blessed that when I remarried, it was to a woman who was willing to raise my children. She also introduced me to Christian Science. My wife never accepted the labels put on my daughter, and she has worked tirelessly with Julianne since she was six years old. During that time, we have seen Julianne overcome the labels one after another.

Last year, she was enrolled in a mainstream setting for the first time. She performed at a high level in all of her classes except for math. Having spent her entire schooling in selfcontained classroom settings, my daughter was now expected to work in algebra and geometry like other eighth graders, even though she had no foundation or previous instruction in basic math skills or use of a calculator. The time and energy expended on getting Julianne to realize that she had to follow steps in order to do multi-functional math was truly incredible.

The experience my wife relates in her testimony really was the turning point in this particular situation. My daughter's newfound willingness to learn the necessary steps, my wife's freedom from headaches, nausea, and tension, and increased family harmony were all evident when I returned home from work that day. And the effects of the healing reached even futher. At Julianne's eighth grade graduation she made the honor role and was recognized for her academic achievements—achievements that many once thought would be impossible. 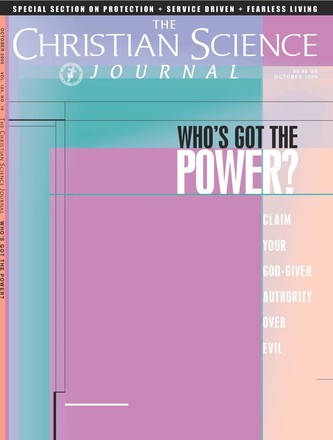 Be true to yourself

Give peace a chance

Church — A work in progress

Disarming ignorance and malice . . . through love and healing

By Jeffrey Hildner with contributions from Phil Davis | October 2005

WHAT HOLDS IT ALL TOGETHER

A time of spiritual renewal

OUT OF HARM'S WAY