The first services were held in the new church edifice of the Mother Church on Sunday December 30th, 1894. The dedication services having been fixed for January sixth, which was the regular communion day, it was thought best to hold the communion services at the former date, as it would have been impracticable to read the long list of applicants at each repetition of the services.

At these services the auditorium was filled to overflowing, many being obliged to stand in the doorways and vestibule.

The services opened with hymn number 178, "Saw ye my Saviour? Heard ye the glad sound? " written by our Leader. Mark xiv. 12-26, was read as the Scripture lesson, and paragraphs one, two and three of page 340, and one and two of page 348, as the lesson from "Science and Health with Key to the Scriptures." This was followed with the silent prayer and the audible repetition of the Lord's Prayer, with the spiritual interpretation.

The 121st Psalm from Mendelssohn's oratorio of Elijah, written as a trio for ladies, was then beautifully rendered by three members of the choir. Then followed the reading of the names of applicants for membership with the Mother Church, by the clerk of the Church, being five hundred and seventy in number.

A solo, "The Holy Night," was then finely sung. The former pastor then made a few remarks of welcome to the candidates who had been received into fellowship with the Mother Church, and also referred to the fact of his retiracy from the pastorate of the Church, saying that he gladly laid down the charge at the foot of the higher and better ministry, — the only true ministry, — the unadulterated Word of God.

The clerk then read the new church rules providing for the new order of service in the Mother Church.

After the reading of these rules the audience knelt in silent communion. Hymn number 111 of the Hymnal, "From the table now retiring," was sung as the closing hymn, and the services closed with the benediction. 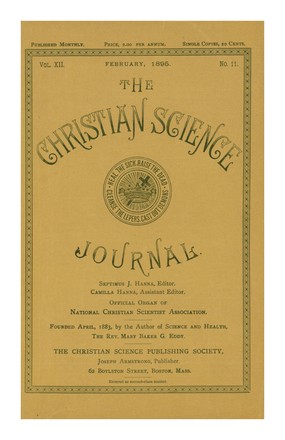 THE DEDICATION OF THE MOTHER CHURCH

SOME VIEWS OF THE NEW CHURCH

FIRST SERVICES IN THE NEW CHURCH

"THE REFUGE OF LIES

OUR "PRAYER IN STONE."

CHRISTIAN SCIENCE IN THE BUSINESS WORLD

During the past month momentous events in Christian Science...