ANOTHER SLEEPLESS NIGHT, and once again, I found myself literally walking on my knees on the concrete of my driveway. Looking up at the sky, I wondered how long I would have to endure the pain of my life. At that time, I rarely slept more than an hour a night. Maybe I would nod off sometime during the day, but the sleeplessness was relentless. And then, some months later, I found that I couldn't eat, drink, or get out of bed for days at a time, I was just constantly uneasy and in misery.

I could list all the ailments that were bothering me—but I'll just say that at one time I actually did write down 24 problems—physical challenges and emotional upheavals—I was going through. On a good day, only two or three problems would plague me, but on a bad day, there were four or five things I'd be dealing with. Through all of this I really did know, deep down, because of my study of Christian Science, that God could heal me of this severe depressive state. I finally went to several physicians trying to get relief, and I was diagnosed as being clinically depressed. I took medication, but it didn't help. I eventually threw all of the medicine in the trash can. The only thing that ever made me feel better was to be around my upbeat spiritually thinking friends, my Christian Science friends who wouldn't give up on me, no matter what. Somehow I would get myself to church, and once there, I didn't want to leave because of my fear of being alone. During this time, which covered about 16 months, various church members took me in, cared for me, prayed with me, visited me, brought me food, comforted me, took me on trips with them. They always knew who the real Alvin was, and they didn't buy this picture before them.

A slide into unrelenting anguish and pain completely reverses, bringing joy and freedom with the dawn.

Of course, there were things in my life that had precipitated this incredible slide into darkness. I had been abused as a child, and throughout my school years I was challenged with what today is called Attention Deficit Disorder—basically, I just had a terribly short attention span and couldn't concentrate or focus on any one thing for more than brief periods. I also was dyslexic and had anxiety problems. At that time I was just considered a bad student and unable to learn as others could. By the time I was at the point of this depression, I had blown up a couple of marriages, and wound up feeling like a failure, with no hope for a happy future. I felt like my life was over. At times I considered taking my own life, which alternated with the feeling that I already was at the end of my life.

But the one thing I did have which never really left me, was the knowledge I'd gained by studying the Bible and Science and Health. This knowledge was that the man I was looking at in the mirror—this image of a sad, used-up, depressed mortal—wasn't really me. What I knew at some level was that all of this was a mortal dream. I had several dear friends who were Christian Science practitioners who prayed with me at different times during this period. I really believe that they and my other Christian Science friends who were supporting me in various ways literally saved my life. Through all of their prayers, and my own, as well as prayerful treatment in Christian Science, I began to realize more and more that what I saw in the mirror was not the real me. The real me was the reflection of God. And by reflection, I mean that I saw that God's man is God made manifest, or apparent. The physical picture that I had hated and put down was just an illusion.

It was a constant battle every day to see myself as this uplifted image because the carnal mind continued to bring me down, to tell me that I was a useless mortal. As I've said, this whole horrible nightmare lasted about a year and a half, and I struggled with this battle continuously. But eventually I began to see myself more on the side of the positive view. I would even declare out loud that I was God's image, and more and more I began to really grasp that as a fact.

I began to realize more and more that what I saw in the mirror was not the real me. The real me was the reflection of God.

I often read the Christian Science Weekly Bible Lesson, and today it has become a staple for me. It's my bread and butter. I would also go through the Christian Science Hymnal, and I read it cover to cover. Sometimes lines from hymns would stay with me for days. I know they helped me. One that was especially strengthening was Hymn 324, which starts,

Take my life, and let it be
Consecrated, Lord, to Thee.
Take my moments and my days,
Let them flow in ceaseless praise.
Take my hands, and let them move
At the impulse of Thy love.

Also this line from Science and Health meant so much to me, and still does: "... divine Love cannot be deprived of its manifestation, or object ..." (p.304).

Somehow, with all the prayer and the constant turning to God and the love and support of the practitioners, on one specific morning—August 10, 2004, between 8:00 and 9:00 a.m.—something snapped. Something broke. Something changed. Something took place in my life. I got up and didn't go back to bed.

About ten days later, I was having lunch with a friend, and I just felt this heavy, wet, blanket—this feeling of oppression—start to lift off. It took a little while longer for it to be completely gone, but I knew at that point that I was off and running. Soon I became completely free of the entire experience.

I physically changed. I lost my fear of death. I lost my fear of growing old and decrepit and useless. I realized that I could not die. I realized that Life is eternal. I understood that there is no death. God's reflection, His image and likeness, could only manifest the qualities of God. Amazingly enough, the few gray hairs I had disappeared—and haven't returned. I regained my energy, my interest in life, and now I feel real spiritual joy. I even began to hear notes in music I had never heard before, what I call "music in the music." I began to have an appreciation for art that I'd never had before. I lost my anxiety. I had more focus when reading and learning new things. All that inability to concentrate and stay with something I was reading disappeared. I truly was reborn.

I can honestly say that I had resurrected out of the pit of depression to embrace life in a way I never had before. I could never express enough gratitude for the blessings that have come to me through my study of Christian Science and for being introduced to this beautiful understanding of God.

Alvin Nissen works in the real estate business and lives in Kenner, Louisiana. 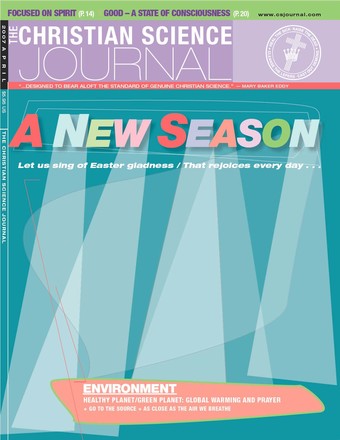 FROM ANGER TO LOVE

ABOVE THE FRAY—and STAYING THERE

OPEN TO THE CONVERSATION